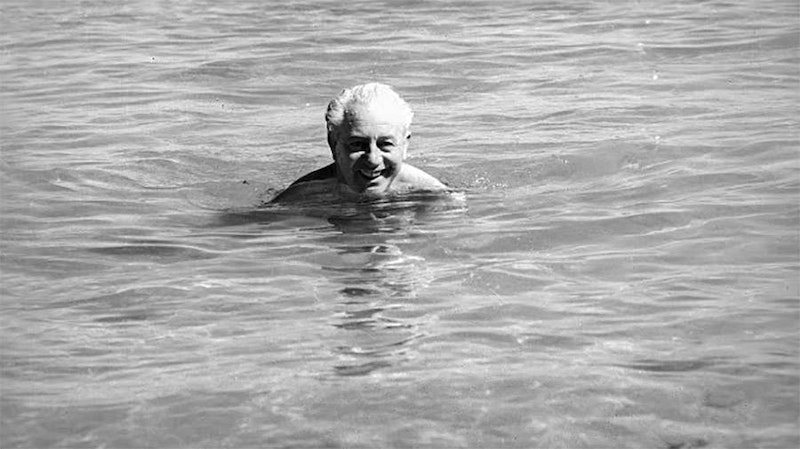 Harold Holt loved the ocean. As Australia’s 17th Prime Minister, he took every opportunity to swim and go spear fishing as a way to mitigate the stress and anxiety of his job. On the morning of Sunday, December 17, 1967, Holt and four others drove to the Victoria coastline to watch famed sailor Alec Rose in his attempt to circumnavigate the globe. On the drive home, Holt suggested the group go for a swim.

They stopped at Cheviot Beach, an isolated spot not far from Holt’s summer house in Port Sea. The group included Holt’s neighbor Marjorie Gillespie, her daughter, her daughter’s boyfriend and a local man named Alan Stewart. It was a blustery day and the surf was tumultuous. Holt asked Stewart to join him for a quick dip. Stewart felt intimidated by the rough seas. Holt tried to reassure him. “I know this beach like the back of my hand,” he said.

Holt plunged into the ocean while Stewart stayed close to shore. Stewart later told police, “I noticed the tide was very high and the surf was very turbulent, the biggest I have seen on that beach.” Another eyewitness Martin Simpson said, “I went into the water almost knee-deep and there was a fairly strong undercurrent, so I just splashed around without going in to far.”

Stewart watched Holt swim toward the breakers and suddenly “the surf increased in ferocity.” Marjorie Gillespie also watched Holt. “The ocean became turbulent and appeared to boil and swamp on him,” she said. He looked back toward shore, obviously struggling. Suddenly he disappeared beneath the waves “like a leaf being taken so quick and final.” He was never seen again.

Holt’s disappearance was unprecedented. Never before had a nation’s leader simply vanished from sight. It sparked the largest ocean search operation in Australian history. Helicopters, rescue boats and 340 search personnel were dispatched to the area. Police and naval divers focused on the rock pools near where Holt was last seen. They were continually slammed against the cliff face by ferocious tides.

Word spread among the national media. Holt’s wife and their two sons were flown in from the Australian capital Canberra. As the day progressed, conditions worsened. A storm approached and by evening the search was suspended. Rescuers knew any chance of finding the prime minister alive was gone. The search resumed three days later and continued until January 5th, three weeks after Holt’s disappearance. His body was never found.

That’s when the conspiracy theories started. Holt was elected in 1966 in a landslide. He was Australia’s first liberal prime minister and was popular among the masses. The international media dubbed him the “007 prime minister” due to his dashing good looks and penchant for being photographed with beautiful women. He supported greater racial tolerance mandating the inclusion of Aborigines as citizens. He also dismantled the notorious Australian Policy forbidding people of non-European ethnicity from immigrating to Australia.

Holt publicly supported the Vietnam War. His campaign slogan had been “All the way with LBJ” and he tripled the number of Australian troops. By 1967, public support for the war soured. The Australian economy suffered from increased inflation and the devaluation of the dollar. Holt was embroiled in a scandal involving the misuse of military airplanes. He was also the target of an assassination attempt. While working late one night, a bullet hole was found in his office window.

After Holt’s disappearance, some media outlets speculated that anti-war activists murdered him. Others blamed the CIA, claiming Holt was about to pull troops from Vietnam. Still others said it was suicide. This theory gained traction after it was revealed the two most powerful men in the Australian government had turned against Holt and were trying to force his resignation.

The strangest theory postulated that Holt was a spy who faked his death, escaped in a Chinese submarine, defected and lived the rest of his life in anonymity in Beijing. This absurd scenario was the basis of a 1983 novel called The Prime Minister Was a Spy by British author Anthony Grey.

The initial police report concluded that Holt overestimated his swimming ability, was caught by a rip current and died of “accidental drowning.” Additional inquiries revealed that several months before his disappearance he nearly drowned on the same beach and had to be helped to shore. He’d been suffering from a pinched nerve in his neck, causing a weakened shoulder condition. He’d also been taking morphine for pain. This may have impacted his decision to swim despite the dangerous conditions.

After Holt’s disappearance, Cheviot Beach was permanently closed to the public. Holt was 59 at the time of his death. Several world leaders attended his memorial, including Lyndon Johnson, Ferdinand Marcos and Prince Charles. In an example of Australian dark humor, a public swimming pool in Melbourne was dubbed the Harold Holt Memorial Swim Centre. His disappearance remains the greatest vanishing act in the history of world leadership.