For the numbered grid system, we can thank the early-19th Century commissioners who drew up Manhattan’s grid plan and surveyor John Randel, who rode the island on horseback, incurring the anger of property owners who’d be forced to sell to the city sooner or later. 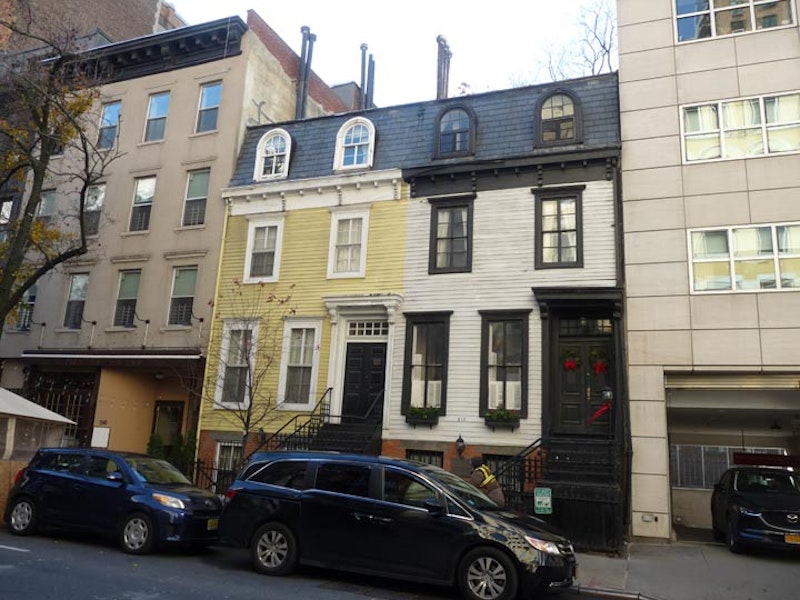 To amuse myself the past few years I’ve been walking Manhattan’s numbered cross streets river to river, or at least from where they begin and end. Each one is a universe in itself and for the numbered grid system, we can thank the early-19th Century commissioners who drew up Manhattan’s grid plan and surveyor John Randel, who rode the island on horseback, incurring the anger of property owners who’d be forced to sell to the city sooner or later. Randel marked each future corner with wooden posts or metal bolts, most of which have been lost. A couple are still in place, and I know where they are or have a good idea, but I like to keep their whereabouts a secret lest souvenir hunters remove them. With over 220 numbered cross streets, it’ll be some time before I run out of streets to explore.

This day I decided to survey 52nd St.. I took the E to 53rd and Lexington and walked east to 1st Ave., and then west on 52nd to the Hudson River. Pretty straightforward. When I’m in Turtle Bay, I can’t resist stopping by #312 and 314 E. 53rd, a pair of wood frame houses rendered unique by a law prohibiting new wood frames from being built in Manhattan as they pose a fire hazard. Already existing ones, though, can remain in place. This pair was constructed by Robert and James Cunningham in 1866. That year there were few residential structures this far north on the island. The houses are built roughly along the then-fashionable French Second Empire design, recognizable by slanted roofs and dormer windows. 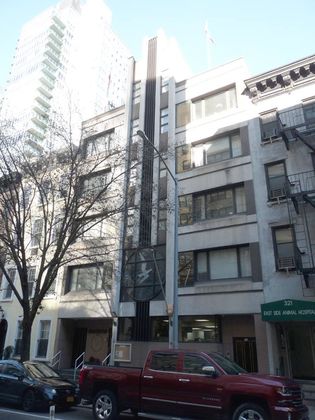 Forty to 50 years ago, Sunset Park and its neighbor to the south, Bay Ridge, boasted a considerable Scandinavian population, primarily Norwegian (Nordisk Tidende was found on most newsstands, and a number of Danish bakeries lined 5th Ave). The Scandinavian legacy is preserved by the annual Norwegian Independence Day Parade in May, Lutheran Medical Center on 2nd Ave. and 54th St. (founded in 1883 by a Norwegian Lutheran nurse, Sister Elizabeth Fedde, which is improbably noted in the signage at the 53rd Street BMT subway station). Unfortunately, the Danish Athletic Club on 65th St. closed in the summer of 2020, another COVID victim.

The first Norwegian Seaman’s Church was established in Red Hook, Brooklyn in 1878 by Ole Bugge Asperheim, at 111 Pioneer St. in a building that still stands but is no loner used. In 1928 the Norwegian congregation moved to what had been the Westminster Presbyterian Church, a big brownstone pile at 450 Clinton St. in Carroll Gardens. In the mid-20th century 1500 ships from Scandinavian counties docked at Brooklyn’s East River piers annually, and during World War II the church helped thousands separated from their families while the Nazis occupied Norway. Beginning in the 1970s, south Brooklyn’s Norwegians dispersed to Long Island and the northern suburbs, and the church decided it could serve NYC’s Norwegian faithful better from Manhattan. In 1989 the church purchased a pair of brownstones and converted them to the present church building at 317 E. 52nd St. 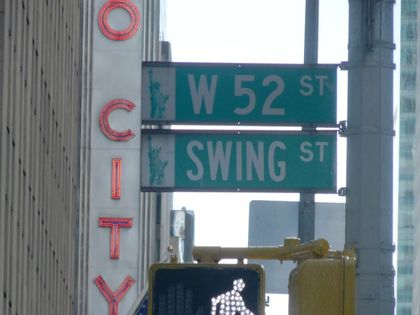 W. 52nd St. between 5th and 6th Aves. looks nothing like it did in mid-20th century, when it was lined with jazz clubs such as Leon & Eddie’s, the Famous Door, the Onyx Club, Jimmy Ryan’s, Three Deuces, the Spotlight Club, and Club Samoa. It was here that J.J. Hunsecker, the powerful columnist played by Burt Lancaster, remarks to smarmy press agent Sidney Falco, “I love this dirty town” after witnessing a street fight in Sweet Smell of Success. In 1978 Billy Joel shot his 52nd Street album cover holding a trumpet. By then, the clubs had gone, but the CBS recording studios were located nearby. Barry Manilow followed with an album a few years later called Swing Street. Today, bland hotel and office buildings have replaced the neon signs and hurly-burly. Only one club remains from the jazz era. 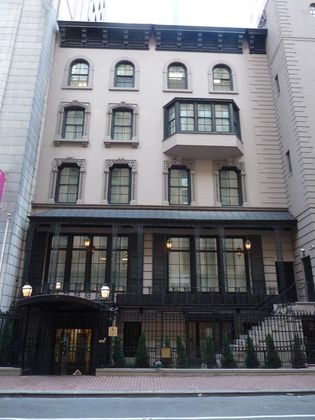 At 359 6th Ave. in the Village you’ll find an 1832 Federal style building that in 1922 was a speakeasy called the Red Head, operated by Jack Kriendler and Charlie Berns. It subsequently moved to Washington Pl. and then uptown to 21 W. 52nd St. in 1929, where it became the 21 Club. For the first few years of operation it continued as a speakeasy and management developed an ingenious method of hiding the liquor from authorities during raids: a system of levers tipped the bar shelves, sending bottles down chutes and into the sewer system.

Like Chumley’s in the Village, which had also been a speakeasy, 21 had just a soupcon of lawlessness that persisted even after liquor became legal again, and the city’s power and showbiz world elite made it a clubhouse over the years, a formula that fellow venues like Elaine’s would also adopt. The venue adopted trademarks like its iron gates and lawn jockeys, which were gifts from patrons. As the rest of W. 52nd St. including its jazz clubs of old succumbed to modernity, 21 survived after the Kriendler and Berns families sold it in 1985; it’s been owned by several entities since.

I’ve never been inside, and when I walked past this week, the lawn jockeys had been removed as 21 shut because of lack of patronage during the pandemic. Its owners have a sign on the door saying “We look forward to welcoming you back to ‘21’ in due course.” 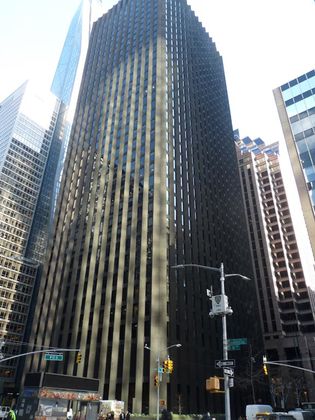 In May 2019 I rode down to Kennedy Airport, not to catch a plane, but to get a look at Eero Saarinen’s (the Finns love double vowels) TWA terminal, which was built in 1962 and finished after the architect succumbed to cancer. It’s nearly pure white, with a sweeping white exterior and a widely-spaced interior with walls and highlights in bright, primary colors; in short, it looks like a building presaging the 1960s. Saarinen also designed the iconic St. Louis Gateway Arch.

It’s surprising that this 38-story building clad in dark gray granite at W. 52nd St. and 6th Ave., home of the Columbia Broadcasting System and known as “Black Rock”, was designed by the same architect. CBS, which merged with Viacom, intends to sell the building, which opened in 1965. 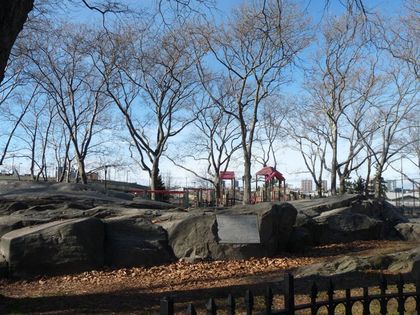 DeWitt Clinton (1769-1828) was a NYC mayor; NYC assemblyman; U.S. Senator; New York state governor, and presidential candidate, losing to James Madison in 1812. As governor, Clinton instituted the construction of the Erie Canal from 1817 to 1825, which connected NYC to the Midwest by ship.

The land between 11th and 12th Aves. and W. 52nd and 54th Sts. was acquired by the Parks Department in 1901 and designed as a park by architect Samuel Parsons Jr. Between 1902 and 1932, children tended a farm garden featuring flower beds, observation plots, a pergola, and 356 4′ x 8′ vegetable gardens. Director Frances Parsons held classes teaching local children about plant science, conservation, nutrition, and hygiene. The Flanders Field Memorial, a statue depicting a World War I doughboy, was installed in 1930 and restored in 1997. Today, there are athletic fields and a dog run in a part of town with otherwise unremitting urban grit.