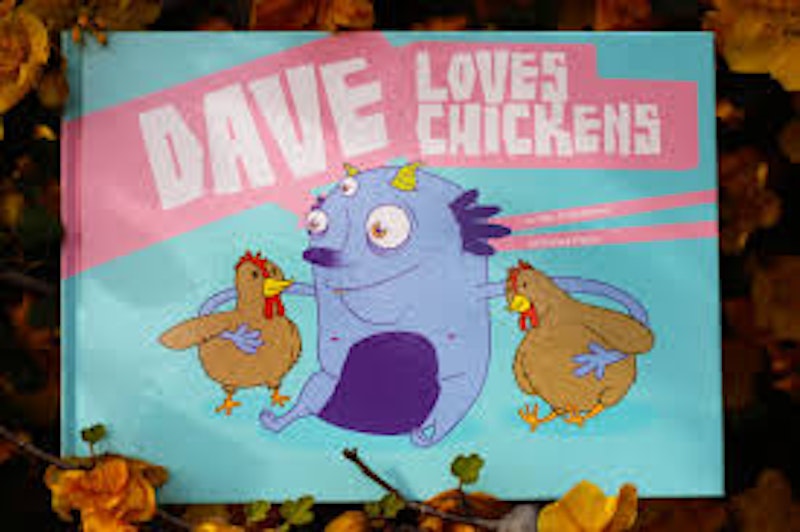 My kids love the vegan children's book Dave Loves Chickens. Dave is a purple alien puzzled by humanity's meat-eating ways. The book manages to communicate a compassionate message in a silly, age-appropriate manner. Recently, I interviewed the author and illustrator, Carlos Patiño, about this title and its sequel, Dave Loves Pigs. The first book began with a Kickstarter campaign. After Patiño raised funds, completed the project, and sent out initial versions of the book, he began submitting it to publishers.

"I approached a few publishers that had done vegan kids books in the past but the one publisher that got back to me was Vegan Publishers," Patiño said. "They went and published my book. We worked on some refinement of the original book and then they printed around 5000 copies." Soon after, Vegan Publishers asked Patiño if he wanted to make a second installment in the series. The illustrator jumped at the chance. So Dave Loves Pigs was born. My kids don't have this one yet, but they will.

Patiño originally wanted Dave to be human child, so he could better connect with young readers. But the author went in a different direction. I can't imagine Dave any other way. "After sketching and whatnot I realized that the idea didn’t work because I wanted to have a character that was completely unaware of how things work here and someone that would find the idea of eating animals as a strange concept," Patiño said. "That’s where an alien character came into place."

The illustrator wasn't sure what exactly inspired Dave's design. For me, Patiño's drawings brought to mind SpongeBob SquarePants and Courage the Cowardly Dog, which I watched with my significantly younger sister. But he cited earlier shows as formative influences.

"I grew up in a great era of cartoons," Patiño said. "I’m sure I’ve been inspired by Aaahh!!! Real Monsters, Ren & Stimpy and a lot of 1980s and 90s kids cartoons that I still watch every now and again. Nicktoons, Cartoon Network and Hanna-Barbera were my go-to cartoons and I’d watch them daily." Patiño has received positive feedback from parents about the Dave series. Some say their kids read it daily. Others say it helped their kids give up meat. This makes the author very happy.

"I never expected to hear from complete strangers, but I love it when I do because their comments and emails are always so genuine," Patiño said. "Also, now that I have a two-year-old myself, I can connect with parents more and understand how happy it makes them when their kid has a favorite book—and it's a book that has meaning."

Unfortunately, the artist has no plans to create more Dave books in the future. Patiño is still working in the children's book space, though. He's currently illustrating a title about foster care and adoption, written by Kyle Tolstyka, called Where Do I Fit? You can find out more about the project on Kickstarter.