Clouds of feathers swarming above me. 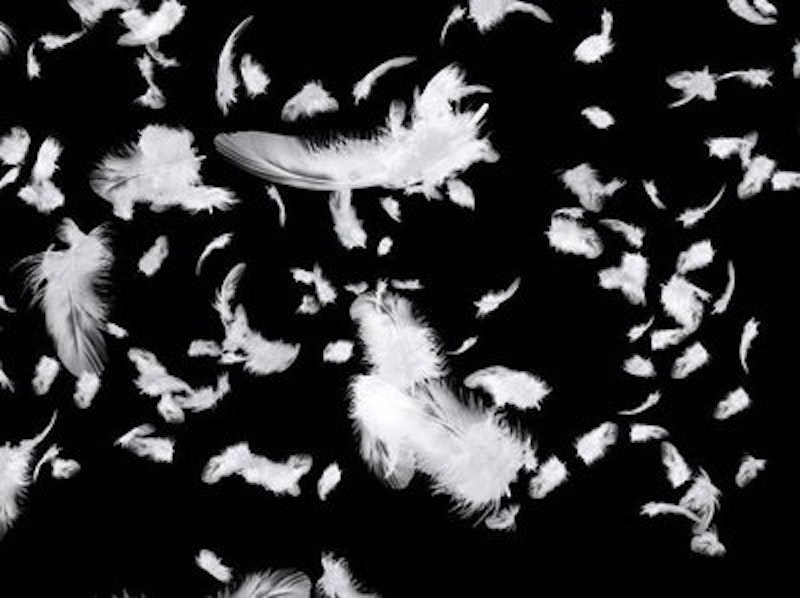 Act I: It’s a Monday morning in August, 1995. The city is in the midst of a heat wave and like many of my Hancock Park neighbors my apartment windows are open. I’m seated at the desk working on a screenplay about angels when I feel a light tickle on the back of my neck. I reach behind me and grab a feather. It’s white, about four inches long and slightly damp. I look to my left and see several dozen feathers floating outside the window.

My apartment borders an alley that runs past a Yeshiva, a Jewish day school. The feathers appear to be rising from the rear of the school. Sensing this is an omen related to my screenplay, I decide to investigate further. The Yeshiva looms large, built from thick concrete and stone. I press a small brass buzzer beside the granite front door. A gray feather lands on my shoulder and leaves a crimson mark on my white shirt. When I look closer, I see the feather is covered with what appears to be red paint.

The front door opens. A Hassidic man with a thick white beard and traditional black garb greets me. I show him the gray feather and point to the stain on my shirt. He stares in silence as if trying to deduce my motives. I point to the feathers in the sky then to my open apartment window.

The Hassid asks if I’m Jewish. I tell him yes. He asks if I keep kosher. I tell him my father does but not me. He explains that the first Monday of each month is Shechita, the day chickens are slaughtered according to Jewish dietary laws. Normally this takes place in the garage, the Hassid explains, but due to the extreme heat the practice was moved outside. This is the source of the feathers.

“So you’re killing chickens,” I say.

“Nothing to do with angels?”

“Excuse me,” the Hassid asks.

“Think you might be able to cover my dry cleaning bill?” I point again to my stained shirt. He does not respond. “Okay, got it. No worries. Thank you for your time.” I walk back to my apartment, a cloud of feathers swarming above me.

Act II:  The house is in the Hollywood Hills, one of those two-story structures on stilts that seems likely to tumble down the hillside in the next big earthquake. The homeowner, a Beverly Hills orthodontist, has hired me to catalogue his belongings on video for insurance purposes. I follow him as he speaks into camera about the history and value of each possession. He treats his home like a museum, each trinket a historical relic. “1977 porcelain vase, hand-fired in Hungary, value $250. 1983 handcrafted leather chair, purchased in El Paso, $2900. 1989 William and Sonoma flatware, made in Vietnam, value $25.”

By mid-afternoon I’m exhausted and bored. We reach a hallway closet on the second floor. “This should be the last of it,” he mercifully informs me. He finds a 1978 bottle of Johnny Walker Red valued at $250. He reveals a set of rusted golf clubs, somehow worth $175. An autographed and framed photo of Muhammad Ali goes for $240. He pulls out a freezer bag filled with brown leaves and begins laughing. “Holy crap. I’ve been searching for this for months. Got it from one my patients. He gave me a pound of Acapulco Gold for fixing his cracked molar.  Come on, we deserve a break.”

I follow him through the house onto an outdoor balcony. It’s a rare clear Los Angeles day and the view is breathtaking. Sunset Boulevard winds past the Chateau Marmont and Tower Records. I can see Century City, LA Airport and the Pacific Ocean. The orthodontist rolls a joint. He takes a deep toke and then hands it to me. I inhale and immediately begin coughing. It’s been years since I last smoked weed. Within minutes, a wave of relaxation spreads from my chest through my legs. I feel lighter, calmer, connected. I lie back on a rattan chair and stare skyward. I see a brown hawk soaring above me. As I track the hawk’s path, I notice a man staring at us from the balcony of the neighboring house. He has dirty blond hair and a thick moustache. After several moments I realize the man is Nick Nolte. At least I think it is.

“Hey there,” the man calls out. “Beautiful day.”

“Beyond words,” the orthodontist answers.

“You guys smoking the loco weed? Careful, that stuff will fry your brain.”

“Nah. I’m staying away from the hard stuff. Drinking wine coolers these days. It’s not wine and it’s not not wine.” These were the kind of words that blow your mind when you’re stoned. I suddenly feel a need to list Nolte movies in my head. 48 Hours and The Deep and Down and Out in Beverly Hills and, and was he in Against All Odds or was that Jeff Bridges? As I mentally list Bridges films, I hear a piercing cry. The hawk is poised on the adjacent rooftop just ten feet away. His beak is pointed and sharp and his massive brown feathers are spotted with white. He stares as if contemplating an attack then soars skyward toward the city, his shadow exaggerated on the hillside below.

While driving home, it hits me that the hawk is Nick Nolte’s “spirit animal.” I also realize that Nolte and Jeff Bridges are the same person, at least from a casting perspective. Nolte’s words echo in my head. That stuff really does fry your brain.

Act III: It’s 1992 and I’m at a newsstand on Fairfax Ave. across from Canter’s Deli checking a list of screenplay sales in Script Magazine. For some reason kidnapping stories are hot. As are student-professor love stories. I note that first-time screenwriters are doing better than ever and then I ponder whether I’m included in that group since I optioned a screenplay, just never sold one outright. While grimacing at the cliché I’ve become I suddenly notice my agent walking past me on Fairfax. A man walks closely behind him holding something against my agent’s back.

My agent looks toward me. We lock eyes. His face is filled fear as he mouths the words “I can’t” and then the second man pushes him and they hurry down the street. “Are you okay,” I yell. He doesn’t respond. They make a quick left on Beverly Boulevard and disappear from view. I run to the newsstand and ask the proprietor to call 911. He doesn’t have a phone. I sprint across the street to Canter’s. The cashier calls the police and within minutes a squad car meets me in the parking lot. I explain to two officers what I witnessed.

“What does that mean?”

“He was holding something against my friend’s back. It was dark. I couldn’t really see.”

“Do you know your friend’s address?”

“Not the house number but it’s only a few blocks from here. I can take you there.”

I get in the back seat of the squad car and lead the officers to my agent’s home. They knock on the front door. No one answers. I give them my agent’s number and they call. They reach his answering machine. The officers drive me to the Hollywood precinct to file a report. I spend the next three hours in bureaucratic hell, rehashing the same information to two different clerks. I don’t get home until midnight.

I immediately phone my agent. He answers on the second ring.

“That guy. On Fairfax. Were you being robbed?”

“Oh right, you were there. Sorry. I should’ve called. Don’t worry, I’m fine.”

“You thought I was being robbed.”

“I joined an improv class. We were doing an exercise.”

“Why didn’t you say something?”

“I couldn’t break character. That’s the first rule of improv.”

“Why are you doing improv?”

“I was thinking about getting into acting. You know, taking a break from the agent game.”

“Were you planning on telling me?”

“So you’re no longer going to be my agent, Bill?”

“I wish you wouldn’t call me Bill. You know my name is Billy.”

“It doesn’t matter. My acting name’s going to be William.”

“I thought you said it wasn’t a sure thing.”

“It’s not,” he says. “We’ll talk tomorrow. It’s late.” He hangs up the phone. I stare at the wall. This Hollywood thing is really starting to bug me.