At the end of Brookyln. 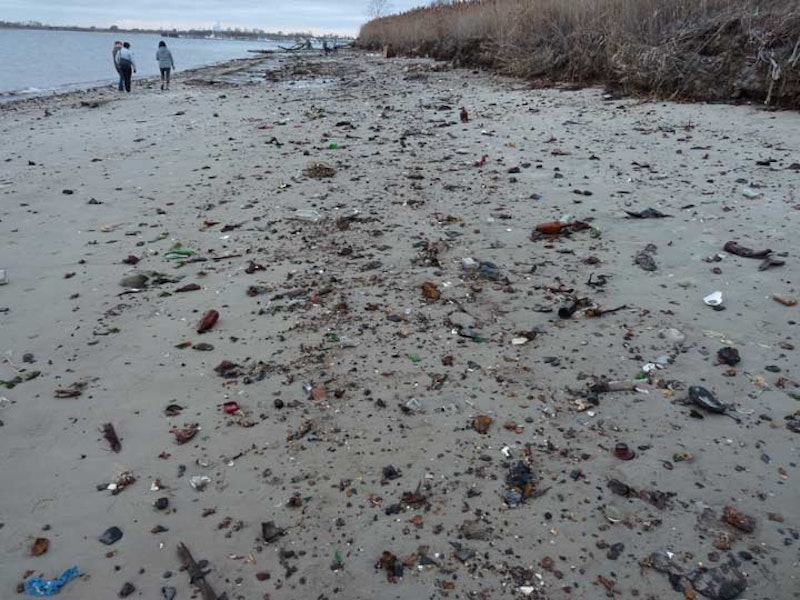 The only time I saw The Rocky Horror Picture Show in person was in 1978, in an out-of-the-way theater called The Graham on Whitney Avenue and Plumb 1st Street, in an obscure section of Brooklyn between Sheepshead Bay and Gerritsen Beach called Plumb Beach. As is usual with showings of that perennial chestnut, the audience, including the friends I was with, got into it, donning costumes and roaring comeback lines to intentionally cheesy movie dialog. Today, you would never know there was a theater there; the Graham burned down in the early 1980s and stayed in ruins for a few years until a condo development named for it finally appeared. Today, the movie needs of area residents are accommodated by a multiplex off Harkness Avenue near the Belt Parkway.

Plumb Beach is named for an actual beach, and according to Leonard Benardo and Jennifer Weiss in Brooklyn By Name, for a profusion of plum trees in the area. For all I know the plum trees may still be around, but over the decades, a “b” has appeared at the end of the name; area residents can spot a newcomer by the way (s)he spells “Plum” without the b.

Other than my one encounter with Frank N. Furter, I hadn’t paid much attention to Plumb Beach. In fact, I had likely seen it just once in my lifetime until a little stroll I took in mid-November in search of equine remains. I’ll explain later. 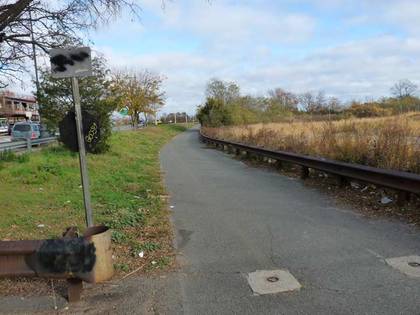 When I lived in Brooklyn (until 1993) I would rove all over the borough with my bicycle—years before miles of bike lanes were built and bicycling became a political statement. I just bicycled with caution, stopping at red lights, yielding to pedestrians, and only occasionally arguing with drivers who opened doors in front of me. (Today’s bicyclists would say I’m a chump for doing all that.) The only real bike paths in Brooklyn were along the Narrows and the Belt Parkway in Bay Ridge and along Ocean Parkway. Another one I heard about followed the Belt Parkway from Sheepshead Bay all the way out to Howard Beach in Queens. Well, from what I saw, bicyclists really took their chances with that path. It had last been paved during the Truman administration, it was choked with weeds and roots, and was lined with shards of broken glass. Still, sometime in the mid-1980s, I was up to the challenge and indeed made it to Queens along the path, but took a different route back home to Bay Ridge.

Of course, almost immediately after I moved to Flushing in 1993, the city decided to repave the path and make general improvements. Pictured above is the entrance at Emmons Avenue and Knapp Street, and it’s a sweet ride, especially if the wind is at your back. Today, though, I was walking. 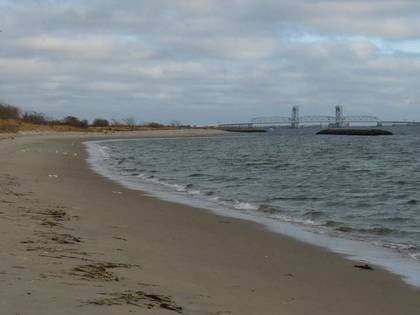 This is the actual Plumb Beach. I hadn’t seen it on my initial ride, as you have to hike through the brush off the path to reach it. Unlike the beaches to its west, Brighton, Manhattan, and Coney, swimming or going into the water is prohibited and no lifeguards are stationed here. According to reports from ten years ago, Plumb Beach used to be rather unkempt and garbage-strewn, but I found it pretty orderly. In June, horseshoe crabs come out of the bay en masse to mate or lay eggs, which also attracts several species of shore birds that feed on them. Observers are encouraged to assist any crabs that are on their backs, as the Xiphosura, find it hard to flip over once upended. Despite the fearsome-looking tail spine, the crabs are nonpoisonous.

In the distance is the Marine Parkway Bridge, constructed in 1936 to connect Flatbush Avenue with the Fort Tilden area of the Rockaway peninsula. I have biked it on several occasions, but found the low railing a little discomfiting, especially in windy weather. 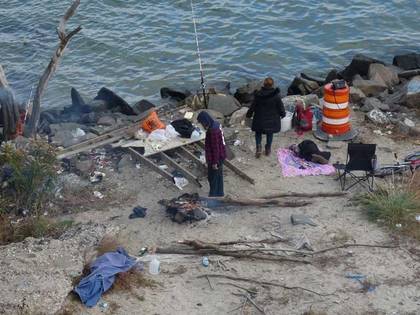 The Belt Parkway, and the accompanying bike path, are bridged over an Atlantic Ocean inlet east of Plumb Beach. I noticed a couple fishing at the bridge abutment and the fire they had built, even though the day was only marginally chilly at about fifty degrees. There were also fishers on the opposite end of the unnamed bridge. 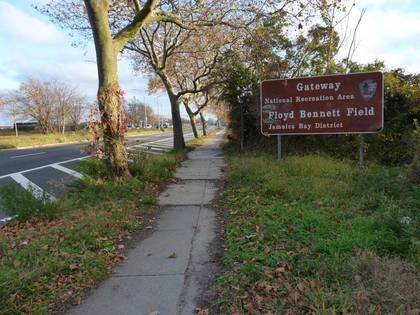 After about an hour of walking from Knapp Street (though I tend to go in a leisurely pace) you will arrive at Flatbush Avenue, which I needed to follow to find my quarry today. Since the 1930s, the south end of Flatbush Avenue has been home to Floyd Bennett Field, which long ago was actually a commercial airport with domestic flights. Howard Hughes launched his “Spruce Goose” from here, and “Wrong Way” Corrigan took off from its runways. La Guardia Airport was indirectly inspired from this field’s presence, since the Little Flower, on an out of town trip, refused to land in New Jersey, favoring instead a New York touchdown. Floyd Bennett it was. However, North Beach Airport, later named La Guardia, was judged a better spot for NYC’s commercial aviation, and Idlewild, later JFK, followed it about a decade later.

Today’s destination is reached by turning right at a marked path at the stoplight on Flatbush Avenue just before the Marine Parkway Bridge toll plaza. (Across Flatbush Avenue is a wood bus shelter with the National Parks Service arrowhead.) This path runs for a good while—I’d say it’s close to a complete mile through alternately thick woods and grassland. 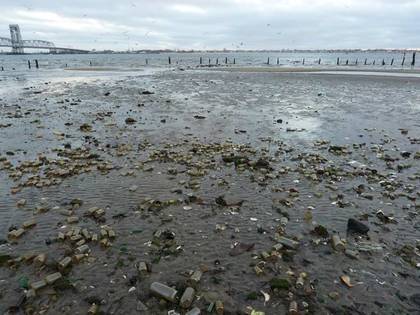 After about 10 minutes, you come on a wide expanse of beach, with the much-closer Marine Parkway Bridge off to the left. The beach, which was at low tide when I encountered it, was absolutely chockablock with intact and broken bottles. Wrecked rowboats are occasionally spotted along the beach.

This is Dead Horse Bay, which used to mark the southern edge of Barren Island. There was once a small community here of well-kept small homes with porches, and the people who lived here ignored the unholy stench of the animal rendering plants (the first one built in 1859) that once dotted the island, as thousands of deceased Dobbins were turned into a number of products including glue, fertilizer, and commercial gelatin in a process founded by Peter Cooper, for whom Manhattan’s Cooper Union school is named.

In the 1920s, Barren Island was attached by landfill to Long Island in anticipation of Floyd Bennett Field’s construction. The horse rendering plants were closed and the homes razed, but the smell remained for several years. 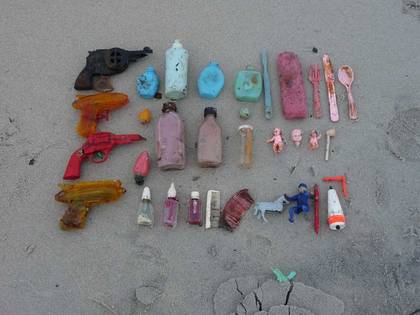 After the rendering plants were closed the Dead Horse Bay shoreline became a landfill in the 1930s. Thousands of tons of trash were buried under a narrow cap. In the 1950s, this cap came apart and detritus of the decades, including thousands of bottles and plastic products that don’t biodegrade have filled the beach ever since. There are those who say that equine bones can be found amid the garbage.

In the above photo, a scavenger has carefully arranged and sorted some plastic toys. 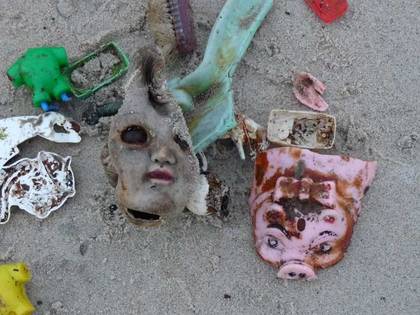 The playthings of a previous age have taken on an ominous look as they wash up on an isolated beach decades after children enjoyed them. The pig toy is appropriately seen here, since back in the very early 20th century, wild hogs overran Barren Island, consuming whatever garbage was laying around—and there was plenty, considering the rendering plants and the people who worked and lived nearby. Finally in 1909, the NYPD arrived, shotguns in hand, and embarked upon a hog massacre that eliminated hundreds of the swine. 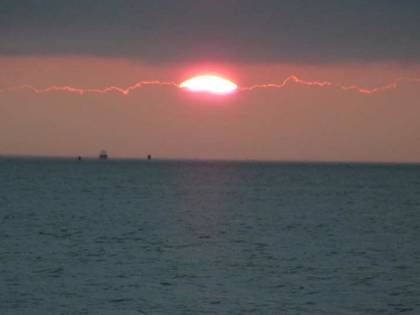 As the red hull of the sun set on Dead Horse Bay, a chill wind did indeed settle in, and since this area has no direct illumination except from the bridge and from distant regions of Brooklyn, I deemed it desirable to hike back through the woods, then to the bus shelter, and get a bus back to Nostrand Avenue where the #2 train awaited for my trip back to Penn Station and then Little Neck, Queens.

I did not want to be subjected to the brayings and squealings of the ghost equines and suines of Dead Horse Bay.