Generational freedom and its subsequent tensions. 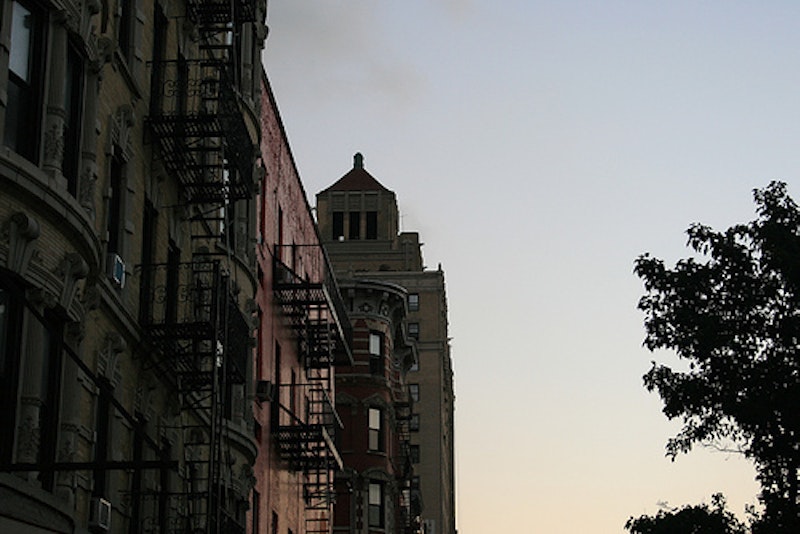 While searching for a New Delhi apartment last September, a real estate broker described Defence Colony, my eventual neighborhood, as a youthful, artistic spot—a place I’d live if I were in the Indian fashion or music industry. Indeed, the neighborhood market’s restaurants and bars had a constant stream of young, hip, elite clientele, dressed in the Euro-shirts and tight, ornate jeans that seem to denote the couture class from London to Hong Kong. Upon moving in, I wanted to ease my family’s latent anxiety—after all, I had just moved 10,000 miles away to a place they knew nothing about and couldn’t picture in their minds. Eventually, I settled on a comparison: I told them I had moved into Delhi’s East Village, a version of the young New York neighborhood.

About a month ago, I was visiting my cousin in the East Village and began thinking about the comparison I had given my parents. We went to a spot for breakfast around the corner from his Alphabet City apartment. It was a sparkling Sunday morning in Manhattan, one of the first truly beautiful days of the year. It seemed the entire Lower East Side had gone out for breakfast and a walk. The restaurants were swarmed, the old, small streets cluttered with preppy kids snapped up from J. Crew ads, pretty girls with dogs and the hipster bohemian riff-raff that litter every youthful New York City backdrop.

Over the course of our morning, which included breakfast and about 15 minutes of walking, we ran into an old friend of mine from Maryland, one of my cousin’s friends, and four people he went to high school with in New Jersey. I wasn’t surprised: if you’re young in New York, there are only a handful of places you’ll probably be, and the East Village is one of them. It’s been fascinating to watch the people I’ve known cluster around the same set of neighborhoods across the country independently from one another: Chicago’s Lincoln Park, Baltimore’s Canton, New York’s Lower East Side, D.C.’s Columbia Heights. These are the new Post-College Towns, the next step in the Suburbs to College Town to City back to Suburbs circle of life that my generation has embarked upon (though whether we actually move back to the suburbs has yet to be determined).

Staring out that New York window, the scene looked so unfamiliar. It wasn’t just the tall buildings or well-manicured streets; those I had seen in Hong Kong, Bangkok, and Mumbai. It was the people. Everyone was so damn young. I don’t think I saw anyone over the age of 30—even the restaurant managers looked young.

While in India, I found myself envying the way young and old people mixed in daily life. Defence Colony may be hip like the East Village, but it’s still India, a place where entire families prefer to live under one roof. In fact, the large houses of the neighborhood probably skewed it even older with the increased space for all living generations. In my building, the landlord lived with his mother, wife, and college-aged daughter spread out over two of the apartments. Some nights, I would walk to the market and just watch life go by from a restaurant or café—the rich kids smoking outside the bars, little kids running in circles around the huge families gathered in front of the restaurants, couples ambling up and down the disfigured sidewalk. Because the dinner hour starts around 10, families were often out, flooding the restaurants in all the markets, until around 11:30.  It was so fun to see everyone going out together, instead of racing off in a thousand different directions like I’m used to in America.

It’s pretty amazing how stratified by age the United States has become. Many older people go to Florida or Arizona (or, I suppose, retirement communities across the country). Suburbs like the one I grew up in are the domain of the child-bearing and middle-aged, and these places dump their young people out into the world at 18. These youths find themselves first in college towns like Ann Arbor, MI, or College Park, MD, in neighborhoods where children shouldn’t even be allowed, let alone live—a place where the only adults are visiting parents, trying to ignore the kids doing a keg stand across the street and the fact that their child’s house smells a lot like a Cypress Hill concert. Then, the youth go on to the post-college city neighborhoods, where the apartments get a bit nicer, the bars get way more expensive, the only old people are the landlords, and kids still feel a lifetime away.

When I saw another way, a lifestyle where all these people coexist in single spaces, I wondered what I was missing. I worry that all this de facto age segregation deludes us, causes us to forget or resent those older or younger than we are. I wondered about the wisdom and experience of elders that maybe was never passed down to me because I was always off somewhere else. I worry about the vitality I may lose in the future, with no youth to spark memories of some rambunctious past.

But as I listened to my Indian friends’ stories—the lack of privacy, the dictation of one’s future, the secret boyfriends and girlfriends—I realized that the true situation was rather unappealing. Most people I knew loved the system, loved the support it gave them, felt nostalgic for aunties getting in their business, and found great comfort in it. But I treasure independence and privacy. I can’t imagine dating while still living at home (especially when dating itself is taboo). I can’t imagine not having that private public space, the neighborhoods where I can go out without fretting about running into my parents or their friends. Likewise, I can’t imagine being 40, having kids, and living in a neighborhood where bars and clubs are bumping until four in the morning; an attribute that would be considered a major bonus for me right now.

I missed a lot about home while I was away. I missed my girlfriend, family, friends and dogs. I missed football season and snow. I used to take long walks around my neighborhood, headphones on, grinning and wondering how I found myself there, alone, wandering the streets of New Delhi, India. My go-to images that would pop into my head on these walks, my nostalgic memories, visions of home were flashes of having drinks in my friends’ apartments, weaving through crowded streets on our way to dinner or the bar and dancing with my girlfriend at a club. I missed what I couldn’t find in India. I missed my generational freedom.