In search for the human connection—or the witty hauteur of a cynical wiseass. 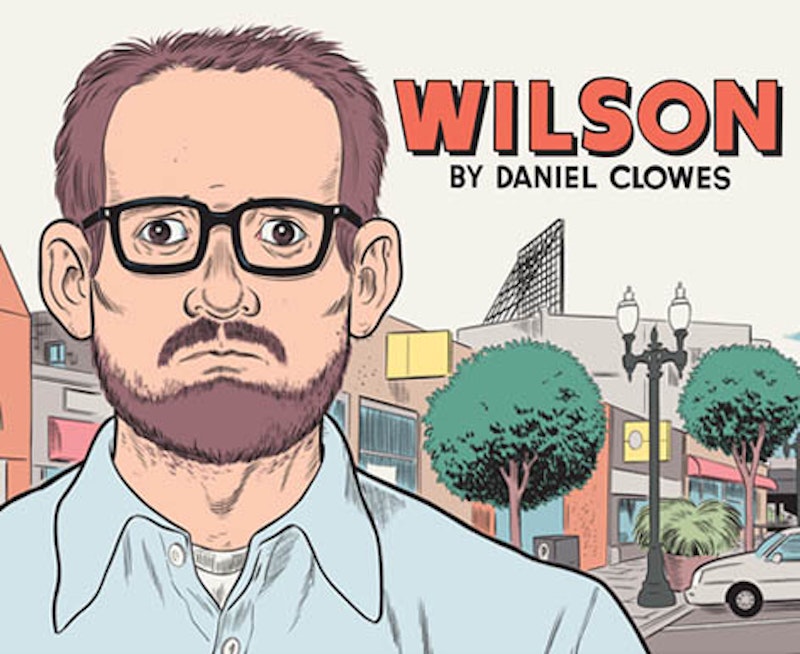 But Clowes didn’t start as a screenwriter, and Ghost World began as a serial comic. Clowes often focuses on sad transitions—in Ghost World Enid and Rebecca bid farewell to their adolescence and their friendship with one another, exchanging their hyper-snotty innocence for an adulthood that they envision as a bleak, anomic wasteland. Clowes’ most recent book, Wilson, bids farewell to age rather than youth.

Wilson experiments less than many of Clowes’ other works. The story unfolds chronologically in a series of one-page comic strips. Clowes constructs these strips in a tidy, repetitive format; in almost every strip Wilson, the protagonist, bemoans his isolation from other people. The final panel almost always reveals that Wilson’s haughty misanthropy makes any real connection impossible. Wilson only likes the idea of other people.

The first strip lays out the pattern: Wilson’s first line, delivered with a shy smile and the upturned eyes of optimism, reads, “I love people!” He makes good on his statement by asking a fellow dog-walker how her life is going; she responds with a banal but sincere catalogue of computer problems. In the final panel Wilson barks, “For the love of Christ, don’t you ever shut up?”

Wilson challenges the reader more than many of Clowes’ other books. It indicts the reader, because we are all, at least in part, Wilson. Clowes’ earlier work delved into more whimsical subjects. David Boring focused on rumors of the apocalypse (when it didn’t focus on its protagonist’s ass fetish), and the peerless Like a Velvet Glove Cast in Iron told a horrific, surreal detective story.

Clowes’ compilation Twentieth Century Eightball introduced the world to characters like Needle-Dick the Bug Fucker and Sensual Santa. Caricature collected the nightmarish “The Gold Mommy” and also provided a singular, poignant image that sums up Clowes’ worldview: a bitter, sarcastic teenager weeping at the sight of an ugly little girl done up as a fairy princess for Halloween, skipping along, thrilled to be trick or treating with her mother.

Clowes’ work, as a whole, mixes several kinds of humor (cutting, bitter, and sometimes scatological) and has something to say about the world, and the place of lonely men in it. Wilson practically eliminates digression, focusing tightly on the protagonist and recounting, often with great leaps between the panels, a neatly chronological narrative.

The book begins and ends (not surprisingly) with Wilson alone and friendless, but the narrative sketches Wilson’s entirely self-defeating efforts to reach out to the world around him. Throughout the narrative Wilson struggles to figure out what he wants more: human connection, or the witty hauteur of a cynical wiseass. Clowes works this constant tension into some interesting questions: does friendship, or love, actually make Wilson happier? Does Wilson have any idea what he actually wants? Are the “normal” people who Wilson wounds with his sarcasm any happier or better adjusted than Wilson?

This begins to sound a little heavy, but Clowes comes at the subject lightly and with a sure wit.  At one point Wilson ends up at a bible study, where he asks the pastor if he’s “a god-fearing man.” The pastor of course says yes, and Wilson replies:

Boy, you’ve got it made, then. If only my parents had given me that when I was young, maybe I’d have something to keep me going in times like this … Once you hit a certain age, though, there’s no way you’re going to buy into all this horseshit. It’s got to be before you develop any logic or reason … Unless you get severe brain trauma, I guess … Or become basically retarded through drug use …

Clowes ends the strip with a wide frame of the pastor looking blank, and Wilson reclining in his chair. “Yes sir, my friend—you’re a lucky man,” Wilson concludes. Clowes never makes it obvious whose side we’re supposed to take. The pastor looks a little seedy and insecure, and his only line in the strip is the “yes” to Wilson’s question—maybe Wilson’s right. But of course Wilson delivers his insight in the form of a sour, condescending diatribe, and of course Wilson, being Wilson, doesn’t seem to know that a prayer meeting isn’t the right time for this kind of inquiry. There’s a bit of Curb Your Enthusiasm’s Larry David in Wilson, but he lacks David’s confidence and bulldog persistence.

Ultimately Wilson is a quiet and melancholy book, despite its protagonist’s rhetorical fireworks and its setup/punchline pattern. A lot happens in Wilson, but not in global terms. Wilson deals with his father’s declining health, reconnects with his ex-wife, and negotiates living with a woman who he doesn’t really love. Wilson rarely gets what he wants, and when he does he finds it disappointing.

Clowes’ clean, wistful art supports the narrative throughout. Comics fans will delight in the styles that Clowes employs; he illustrates Wilson’s life with both roly-poly cartoonishness and graphic-novel realism and pathos. Despite its ambivalence Wilson overall seems like a caution against misanthropy and wasted time. Wilson himself is rarely happy, and Clowes makes it clear that Wilson’s cherished self-image (the embittered smarty-pants) stands between him and the world. The world may be nasty and banal, but Clowes asks if Wilson might not have enjoyed his life more if he had lived in it. Enid and Rebecca of Ghost World fame faced the same choice, but they were young.