In the case of the 4-D Immersion theater at Baltimore National Aquarium (and Avatar), it's better than the original. 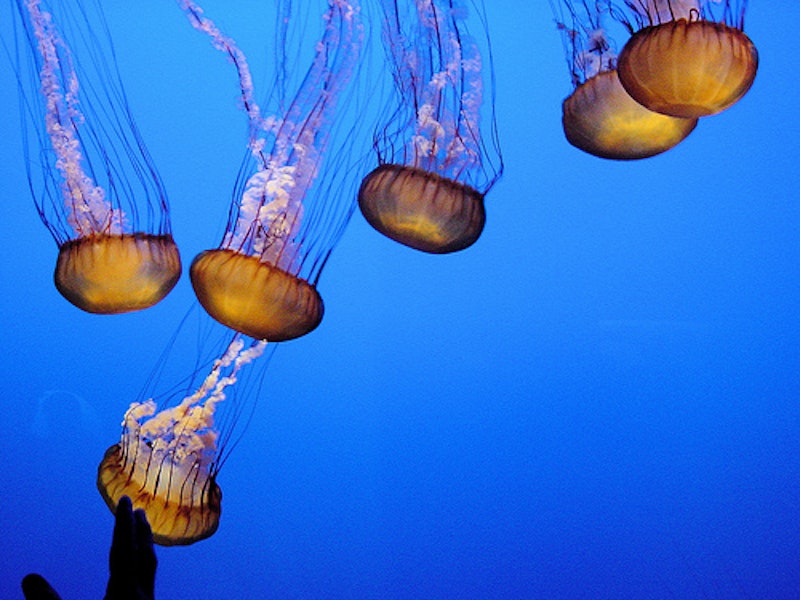 Last fall, I visited the National Aquarium in Baltimore when my girlfriend’s father and little brother were in town. We saw the dolphin show. We saw the jellyfish invasion. We saw the magnificent sea creatures in small glass tanks that once inhabited the waters just outside its walls. But what stuck with me was the 4-D Immersion Theater.

What is a 4-D Immersion Theater? It’s a regular movie theater in which you don 3-D glasses and are then treated to additional “special sensory effects.” The film rolls, and every few minutes you’re assaulted with surprise stimuli. A snake is discovered hiding behind a bush and suddenly—pshhhhht!—a poke in the right kidney; a man breathes in a nose full of pollen and—achoooo!—a mist of spray hits you in the face; an electric eel swims up behind you and—bzzzz! bzzzz!—a swipe at the back of your ankles. Adults laugh at their unexpected gullibility. Children shriek in uncontrolled ecstasy. Babies cry in unwitting terror.

It was fun all around, but something struck me as I exited the building. A slight twinge of inexplicable sadness lingered at the periphery of my conscience. Leaving the aquarium, I didn’t feel the urge to go scuba diving or to send money to a marine conservation organization. As I stood outside and looked across the Inner Harbor, I wasn’t inspired to take action. I wanted to go back to my apartment and lay down for a nap.

I imagine there was a time when aquariums and zoos were not intended as a person’s primary experience of nature. The curators of those first institutions did not concern themselves with recreating an entire world with all the sights and sounds of the savanna and jungle. It was enough to show some of the exotic animals that lived “out there” and the imagination would do the rest. I’d say that was even the point—to merely titillate the human mind and remind it of the wondrous world beyond waiting to be explored.

Now, it seems, the aquarium is a substitution for wilderness. The simulacrum of nature has become the thing itself. As one wanders the dark corridors and peers into backlit containers, or sits in the front row to watch clever cetaceans spiral high into the air, or takes a seat for full immersion in all four virtual dimensions, the out-of-doors somehow feels farther away than ever before. The viewer is inundated with facsimiles yet kept at a distance, not drawn in but blown away. One departs feeling sated, and ready to sink into a nice comfy couch.

I blame technology for this sinking feeling and thank Edward Hoagland for helping me identify the culprit. His recent essay, “Last Call: Old age and the end of nature,” appears in this month’s Harper’s and gives voice to what’s at stake.

“Without the vibrancy of original vision, the freedom of all 360 unfiltered, unedited, sensual, individualized degrees, and the tang of a rapport with all manner of other forms of life—birds that wheel, grass that waves, the entire geyser of Creation—is drained,” he writes.

There’s a risk of losing something vital if wildlife is only viewed at a distance, from the stadium seats of the local aquarium or zoo. What interest is left in the real oceans and forests if the very act of observation is rendered obsolete? “Original vision” may be innate but it can also degenerate through disuse. It takes time to cultivate an eye for nature’s nuance, and there are many competing claims.

Time is a precious commodity and who has extra to spare to sit and observe nature. Not while tweets and texts and tickers stream along the electronic horizon.

Yet at least a few artists have witnessed their creativity being sucked dry by the Internet vacuum and are devising experiments to liberate themselves. One such neo-Luddite is graphic novelist James Sturm who is paradoxically blogging about the experience for Slate. For four weeks he has been unplugged from the web and reports, “The benefits have outweighed the hassles.”

Funny that detaching the digital umbilical cord entails any hassles at all. Perhaps the body’s viscera are now maladapted for the unpredictability of a former social existence. Acquiring information is sometimes burdensome and requires a triangulation amongst other living beings. Sturm laments having to track down an image of a Transformer without having Google at his disposal. Instead, he queries his students, stops by his school’s media room and eventually gets a stack of comic books from the librarian.

Other aspects of analog existence have come as a pleasant surprise for the cartoonist. For one, Sturm receives hand-written letters in response to his blog posts. (Imagine something other than credit card offers, utility bills and Penny Saver coupons in the mail. How delightful.) Many of his correspondents expressed joy at sitting down to communicate their thoughts with pen and paper. What’s more, Sturm writes, “Every single letter was supportive.” None of the sniveling or malice that too often fills the comment sections of someone’s hard work and livelihood.

Unplugging from the technosphere and getting out into the biosphere not equivalent but they are related. They both imply a critical change in perspective that can free a person from unhealthy obsessions. Incessant email-checking, Facebook-updating and news-reading can lead one into an anxious, isolated hole. The same can be said of scurrying from appointment to errand to meeting, following the rhythmic routines of city and suburb alike. Unknown space and time are the antidotes.

But technology is quite possibly even necessary now to convey us into the wilderness, smoothing the transition via GPS-guided vehicle and Internet-reserved campsite. This seems the proper role, to assist us in the logistics of arranging what it is we want to do, to facilitate spiritual renewal and connect us with things worth caring about. It’s when the technology becomes a substitute for the experience itself, which makes me worry. What will it mean when our digital environment is more important than our physical environment, when our avatars are more substantial than the lumps of flesh that drive them.

The answer is out there in the woods, and I’m off to find out. There are trees falling, and I intend to hear them.