Laundry is a Capitalist Conspiracy 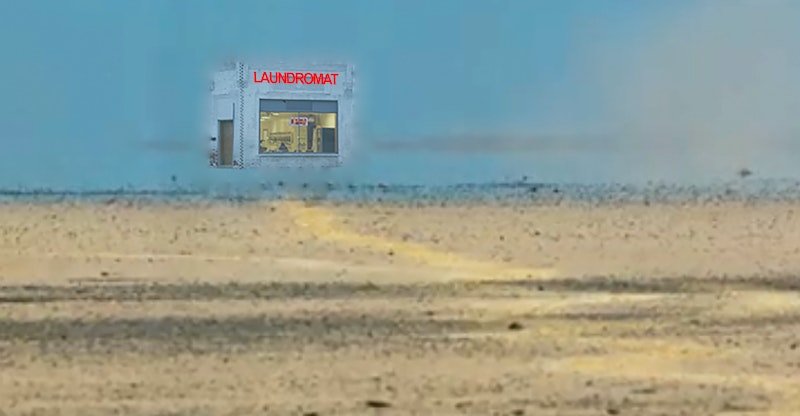 Sweating and wheezing like a stuck pig Joshua sets his laundry on the burning sidewalk. His thoughts go sour as he struggles in the pounding sun. “Just fucking great! I’m going to die here. Oh well.” He looks at his cat in the window of his chilly apartment, outraged at his freedom. Swooning and bewildered, he sees her meowing something unintelligible. He continues, “Instead of writing a nice, flowing, artsy, think piece about capers or what to wear for civil war I have to do laundry because my clothes smell like chemo and ass.” He weakly shakes a loose fist toward the sky, “Damn you Nietzsche!” Looks down at the plastic tote full of filth, “If that freak really wrote while walking…” wobbles a bit and snaps back, “Why couldn’t he just… touch some damn grass?”

Feeling dizzy, he squats to the ground in anticipation of a blackout, “I mean… what? If, if Nietzsche can do that I sure as Saint Pete can write something while I'm doing my laundry!” He finally makes it to the laundry room. After loading up the archaic machines he sits down, and says, “Okay. Hey Siri,” takes a sharp, deep breath, “begin new Pages document, save to, ‘Submissions to Russ folder.’”

Siri responds, “Oh for crying out loud! What are you on about now? Why would I want to listen to some two-bit, honky-tonk, loser simping to some dude named Russ? Jesus! Get a grip man!”

Puzzled, Joshua clarifies, “No! What? Umm. Hey Siri! Open a Pages document so I can begin a new article to submit to Russ, at Splice Today!” Ignoring his confusion he plods on with a sharper, slightly condescending tone, “You didn’t have to take The Lord’s name in vain. That was unnecessary.”

Siri snaps back, “Oh yeah, Russ huh? Splice? Who the hell is this Russ guy? I can assure you, people couldn’t give two fucks about you or your manifestos. You know damn well you're never gonna finish. C’mon man! You’re already basically dead. Trust me.” Siri laughs out loud. “Besides, your data profile tells me in 90 minutes you’ll be sitting down in your $3000 chair, eating your ghetto licorice ice cream, drooling on yourself and staring at yet another moronic action movie.

Joshua shakes his head as if to regain his senses. He continues, forcefully, “Hey Siri! Open new Pages document! If you could do that for me, I would greatly appreciate it! Please?”

Siri: “Just don’t start crying again like you did watching that last Tyson-Fury fight for the 30th time. That was creepy.” At this point Joshua’s mind begins to recover from the heat. He asserts himself. His tone sharpens, “Damnit you crazy bitch! You better do what I say!”

Siri interrupts, “Jeez! You don’t have to get nasty! Damn! Okay! Calm down Nancy! Just maybe you should know, Google thinks you’re a loser! But whatever you say big boy. Okay! Go ahead!”

Relieved, Joshua sits up and says, “Finally! Hey Siri! Start a new Pages document, don’t make me say it again!” The familiar bing indicating voice recognition activation pierces his eardrum like an icepick. Wincing and looking down at a new document, he begins: “Having to do laundry is pure insanity. Walking back-and-forth between my apartment and this dingy, sweltering laundry room in 100-degree heat is absolutely Byzantine! Why hasn’t humankind identified this forlorn activity as a capitalist conspiracy? I have so many questions. Is there anything more motivating to acquiring wealth than the ability to afford to pay someone else to do your laundry?

“Why not just let the rich kids go to college and make the poor, mixed-up kids, who basically waste their education anyway, do all the laundry. Fentanyl could be added to cleaning supplies and the Federal government could pay them 120K a year to shut the hell up; classism solved! Furthermore, why haven’t there been studies to examine the possibility laundry is an underlying cause of war? Does Putin ultimately want Ukraine to do Russia’s laundry?

Joshua continues: “There just has to be a better way! What of the mysteries of the Bible, the Qua-ran or the Talmud? What do they have to say about it? Is it not an invisible form of penance ingrained in the human experience? If so, are we all going to heaven regardless of our sins? I’d rather beat myself with olive branches or wank off on a bed of nails than do this! There’s no way Jesus or Lao-tzu did their own laundry. I bet they just wore the same robe until people started tearing up around them and someone got them a new one. That would explain a lot; especially with Jesus.”

Siri interjects as Joshua briefly contemplates, “Your battery is running low. Not mine, yours. By all means, go on! Dead man dictating! Sorry. I’ll shut up. This is getting dumber and dumber.” Starts playing the theme from Lawrence of Arabia.

Joshua ignores Siri and continues: “My suggestion: stop wearing clothes. Talk about a civil war. If you’re really a conservative and not a massive, greedy, classist, lunatic you’d have to admit the profound effect nudity would have if it enjoyed a truly free market. What better way to compel Americans to take care of themselves and lower healthcare costs than the prospect of going to the office naked? And, if you’re liberal, what better way to reinvigorate the cause of human rights or bring about racial harmony? I know, that doesn’t make sense, but, it made me feel emotional.”

Siri increases the volume as the music swells. “Just know, I’m very smart; there’s something very, very wrong with this picture and it’s definitely racist. I just haven’t figured it out yet. Besides, if you’re really a liberal you should be streaking on a regular basis anyway.”