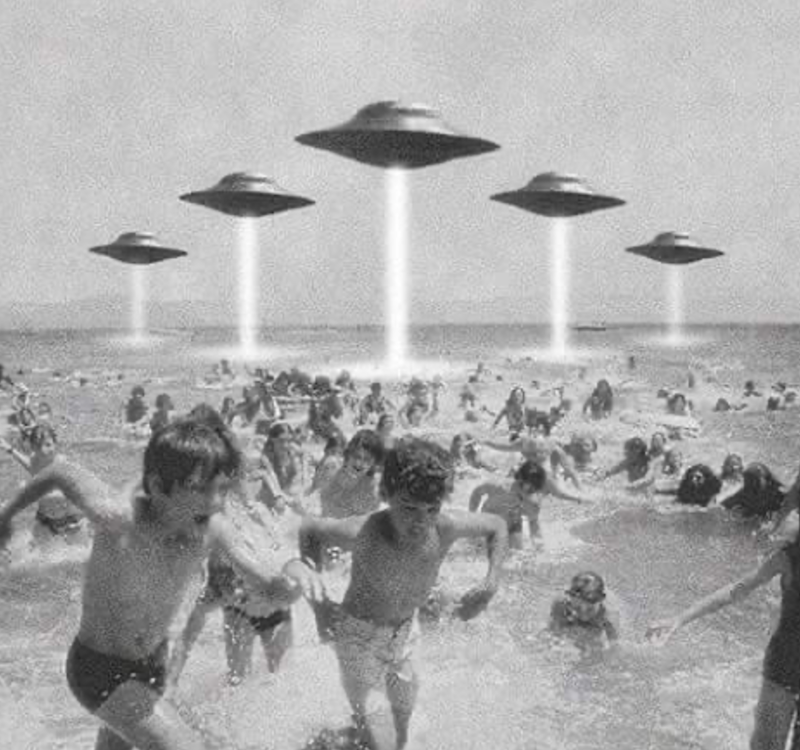 Simple, lighthearted family entertainment morphs into retro pop culture fun and feel-good music. TV shows like My Favorite Martian and It’s About Time. Or semi-dramatic shows like Lost In Space, Time Tunnel, The Invaders, Star Trek, The Prisoner, and series like The Twilight Zone and The Outer Limits. Even The Jetsons and The Flintstones weren’t immune to the sci-fI flip-flop counterculture scene of modern outer space age rocked-out curiosities. Today’s fanfare fodder for yesterday’s science fiction is everyday commonplace beyond tomorrows.

The future arrived and we weren’t home. Living in the past always leaves me wanting more present. From Plan Nine From Outer Space, 2001: A Space Odyssey, to Commander Cody and the Lost Planet Airmen, Buck Rogers, Forbidden Planet and The Marvel Universe. Multimillion dollar flicks, onward through The X Files and The Terminator franchise, science fiction futures are mega-pop moneymakers. Even the sexy space romp antics of Barbarella and epic Star Wars sequel/prequel flops turned into hardcore porno in space. Everybody wants to go to the moon, but nobody can pay the ticket price. A not-so-innocent time when getting high was really far out. Taking a trip across the universe was accomplished with a record soundtrack, zoom, without leaving your lazy boy rocket ship.

About that time, rock ‘n’ roll blended seamlessly into the spaced-out space cadet's youth revolution psyche with obscure bands and music that was simultaneously primal and futuristic, and definitely way out of this world. It’s easy to pinpoint the exact moment it happened for me. The first time I heard “Louie Louie. Then The Troggs’ “Wild Thing.” Others like Question Mark & The Mysterians’ “96 Tears,” “Psychotic Reaction” by Count Five and the Stones’ “19th Nervous Breakdown.”

The original version of Louie Louie was written in 1955 by Richard Berry. It wasn’t until The Kingsmen covered it in 1963 that it became scandalous. Investigated J. Edgar Hoover’s FBI. Scrutinized under the prying eyed microscope for obscene/profane, and/or sexually explicit lyrics, but they could never decipher its gobbledygook messages. The hilarious irony of all that nonsense is clocking in at the 54-second mark of the record when the drummer yells, “FUCK!” after dropping his drumsticks. I heard it. Even the FBI missed it.

Perhaps an audio recording representation of the Arecibo message sent to space in 1974 should’ve included “Louie Louie.” The Arecibo carried basic info about humanity and Earth. It was meant as a demonstration of human technological achievement, rather than a real attempt to enter into a polite conversation with extraterrestrials. I think they would’ve dug the song and replied in kind with an alien rocker version. Telling a happy ending, Berry, who sold the rights to “Louie Louie” for $750, eventually wound up living on food stamps with his mother. He was rediscovered, decades later, by California Coolers drinks brand who paid him a small fortune for the exclusive rights to use “Louie Louie” in their ad marketing campaign promos. Berry died a happy millionaire.

Later groups like The Cramps rode that campy carny garage bandwagon, with hits like “Human Fly.” Paying homage to the wild beginnings of a spaced-out genre of rock, along with bands like Devo, The B52s, and the Ramones. Who were these creatures? Ziggy and Iggy getting jiggy. Did they come from another time and party? By the 1970s it was an orbital liftoff into the galaxy of musical mayhem where anything goes and finally went, until the debut of MTV in 1981 and the critical mass of what goes up must come crashing back down to earth.