How to Argue and Win Every Time

Never want to lose an argument? Follow these simple rules! 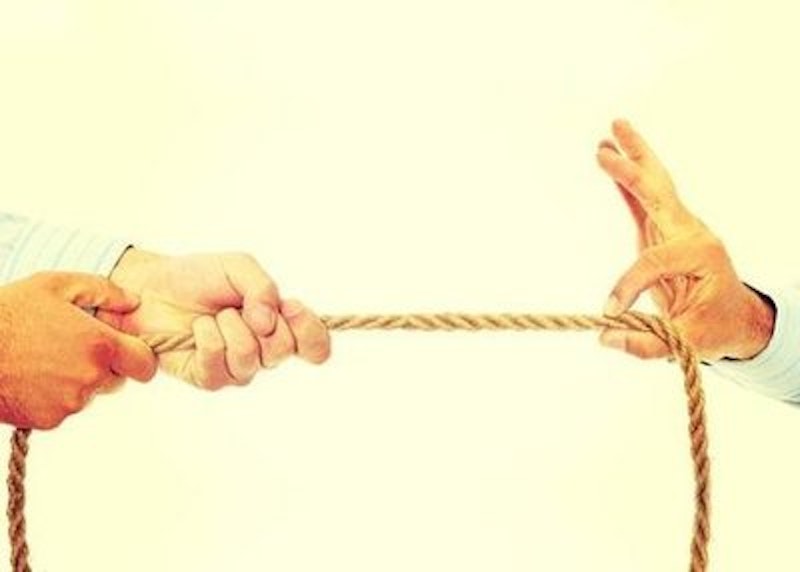 Whether you’re for, against or indifferent to a scalding-hot topic like income taxes, there’s no denying that this is something more than a few people are talking about, whenever they’re not discussing the weather or becoming completely absorbed in the fast-paced lives of those adorable nerds on The Big Bang Theory. If you aren’t capable of making a compelling argument about taxes, the weather, and those Big Bang nerds, there’s a very good chance that the people who can will wind up getting all of the attention, pay raises, Klout, Facebook likes, retweets, Google Plus +1s and Millennial media think piece commissions (approximate cash value per thinkpiece: $5).

But never fear: As last year’s slate of Republican presidential contenders demonstrated, there are many ways to make your point and all of them suck eggs. Let’s examine the best ones.

Bullhorning it: This is probably the easiest way to ensure your voice gets heard, since it involves little more than raising your voice to a level sufficient to drown out the voices of everyone else around you. And those of you who try to limit your communications to texting and Twitter DMs needn’t fear, because there’s an easy way to “bullhorn it” right on the World Wide Web.

Indisputable facts and figures: If there’s one thing that most people usually get wrong, it’s the facts. Since it’s very difficult to remember anything, arguments based on “evidence” frequently devolve into long-winded recitations of urban legends (“Baltimore Orioles baseball used to be really good”), old wives’ tales (“Mountain Dew causes impotence,” “Mountain Dew causes you to develop an impossible-to-deflate pup tent”), inaccurate sports statistics (“Barry Bonds hit 899 home runs in 2004”) and meaningless tautologies (“That child molester deserves the death penalty because he should be killed for what he’s done”). Instead of wasting precious words on a “tl;dr” rebuttal that could be better allocated to the Big Bang think piece you’ve been meaning to semi-plagiarize for the past few weeks, silence your opponent by directing him or her to the repository of all human knowledge.

urfriend: look man I’m telling you that Yasmine Bleeth is dead
u: no way dawg
urfriend: 4 serious bro she is because I heard that somewhere
u: http://en.wikipedia.org/wiki/Yasmine_Bleeth

The appeal to authority: Sure, one could just blindly accept Wikipedia’s claim that Yasmine Bleeth isn’t dead—but what if the person you’re debating makes an appeal to a higher and far more powerful authority? Here’s where things can get murky.

urfriend: bro I just prayed to the Bible right now and the angels said 4 sure she’s dead
u: dawg you must be smoking something
urfriend: http://en.wikipedia.org/wiki/The_bible
u: whoa that is way long
urfriend: it’s in there bro
u: iuno
urfriend: truth

Ad hominem = rad hominem: Even if you’re on the ropes, don’t surrender. The person you’re debating might have you over a barrel by virtue of being smarter than you or invoking angels and the Bible, but they’re probably too much of a sweetheart to retaliate if you’re willing to make it personal and take it personally.

u: hey bro, you’re impotent because you drink all those liters of Mountain Dew while you’re losing games of Madden 2017 with your crappy Browns team.
urfriend: what are you talking about?
u: yeah, I heard it from your parents last night while I was doing the nasty with them. at the peak of their passion, they cried out that you were an accident and that they wished you had never been born.
urfriend: that’s heartbreaking!
u: iuno anyway Yasmine Bleeth is alive.

The power of pathos: There’s no better time to put those years of extension-begging and excuse-making to good use than when you’re facing long odds in a ferocious argument. People simply adore lovable losers—the profitability of my hometown Pittsburgh Pirates is a testament to that—and will open their hearts to you after you begin describing how terrible your life is. Walk a few miles along this particular trail of tears:

You: We’re here to talk about taxes. As everybody knows, there are a lot of taxes going around these days, which can be a problem given that the economy is and always has been in some kind of a depression. While we’re on the subject of depression, here’s how the last year has unfolded for me. I’ve had multiple colds and flus, hep, strep, a respiratory infection, a urinary tract infection, gonorrhea and pneumonia. I’ve also suffered the loss of both parents, incurred a tremendous amount of credit card debt, gained 100 pounds, watched numerous episodes of The Big Bang Theory, written thousands of Millennial media think pieces that nobody ever commented on, and been fired from my job as a professional unemployed gig-doer who watches The Big Bang Theory and writes think pieces. I want you all to consider that when you’re trying to determine whether I’m a man who understands the taxes and the economic depression and so forth.

If you follow the tips presented above, it’s unlikely that you’ll ever lose another argument. Nevertheless, if you do happen to find yourself on the wrong end of a quarrel with someone else, I hope that you’ll do the honorable thing: De-friend and block this person on all of your social media networks without so much as an explanation, then never speak to them again.