Purity is another glorified beach book for the NPR set. 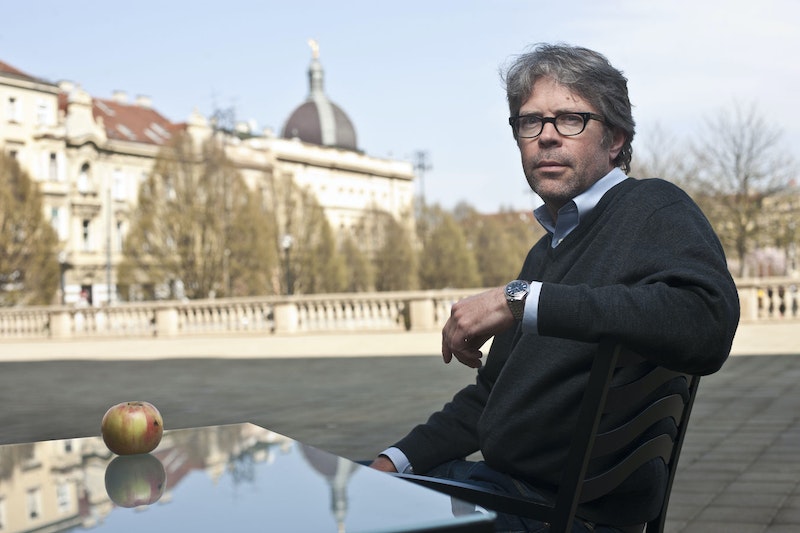 Jonathan Franzen’s been an online punching bag since his ridiculous Time cover in 2010 declaring him a “Great American Novelist” accompanied by an appropriately regal portrait. It was incredibly silly, akin to the Kramer painting, and suffocatingly pretentious for a guy that writes glorified beach books. I felt embarrassed lugging around his latest novel Purity these past two weeks, because Franzen is a social pariah, a piñata painted by cultural critics as an oblivious misogynist and a mediocre novelist puffed up by white male privilege. Franzen is also unlikable and annoying—when he talks about “haters on Twitter,” he’s Grampa Simpson yelling at clouds. He comes off as a prick, unlike his late friend David Foster Wallace, always affable and deeply endearing, truly deserving of the “Great American Novelist” tag. Since Wallace removed himself from the equation in 2008, Franzen’s an unlikely and unfortunate heir, because he simply doesn’t have anything interesting to say.

Franzen’s an excellent craftsman, and I was immediately immersed in Purity. It’s a great escape, but it’s no Great American Novel. Again, it’s a beach book for the NPR set, although Terry Gross seemed to turn on him a couple weeks ago on Fresh Air. Gross took issue with the most discussed excerpt from the book, concerning Anabel Laird, ostensibly a radical feminist but really an hysterical moral absolutist with borderline personality disorder, making her husband sit down when he pees because his ability to stand and pee is an unfair male privilege that she simply can’t tolerate. When Gross took him to task and asked if he really thought any real woman would ever do that, Franzen replied tersely, “Anabel would.” In context, the exchange doesn’t stick out or seem out of character—Anabel is an insecure and unfocused artist who cloaks herself in moral absolutism to avoid being hurt or abandoned. She spits in the face of her billionaire father because his money is “dirty”; she calls her husband’s dying mother a “cunt” when she urges him to reconsider their marriage. Her behavior is abhorrent and incredibly enjoyable. Anabel is a cartoon character, and not a mean-spirited parody of feminists as she’s been portrayed in media excerpts. She’s a caricature of the overambitious and pretentious artist who starts a million grand project but never finishes anything, all the while touting her cutting edge brilliance.

But, of course, her husband Tom is the victim, the “nice guy” who got sucked into a succubus’ world and is too burdened with guilt to stand up for himself, his mother, or her wife’s poor father. All men in Purity are victims of motherly manipulation and emotional terrorism. Franzen has his reputation for a reason—for one thing, he should never write another sex scene in his life. And no, he doesn’t know what women want. Early in the book, the title character Purity (or “Pip”— you’re not Dickens, dude) throws herself on her knees before a man twice her age, throwing off her sweater and bra in a hysterical and bizarrely out of character scene where she practically begs this scuzzy freegan freeloader to fuck her hours after his wife has left him. Franzen wants to fuck Pip, but surprisingly she’s missing for most of the book. Andreas Wolf, the Julian Assange stand-in, gets way too much ink in comparison—paragraph after paragraph about all the sweet pussy he scored in East Berlin, and how his dick chafed from too much Internet-aided masturbation in the early 2000s. The men in Purity just want to fuck, and their feelings for the opposite sex don’t go much deeper. Most infuriating is the return of Jason at the end of the novel, a bumbling college kid who hooks up with Pip in the beginning and texts a friend that her tits are an eight out of 10, and recommends her to him “if you’re into crazy.” Boo!

Purity is a 600-page book that you can read in a few afternoons. You know, like Harry Potter or The Da Vinci Code. We should all expect a lot more from a Great American Novelist, which Franzen never will be, no matter how entertaining his delusions of Dickens might be.