The Confession is out now. Do yourself a favor, don't read it. 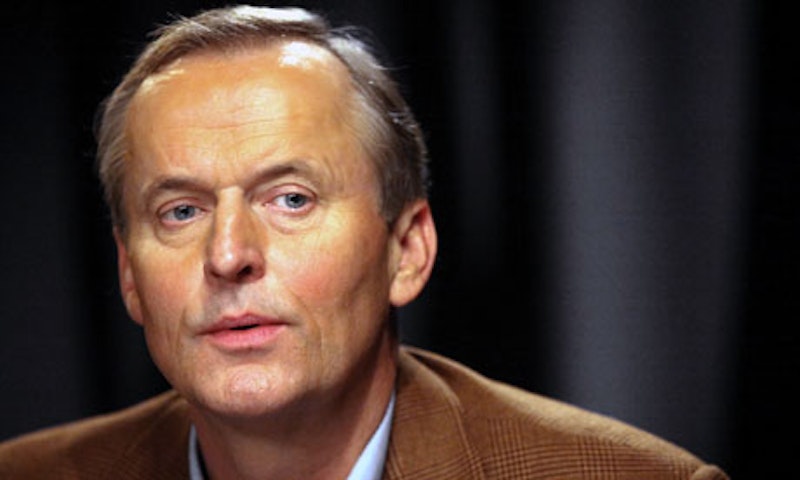 It’s been years since I read a John Grisham novel, but the first chapter of The Confession took me back to that time when I swore never to read another Grisham title. From clichés like, “It had been so long since he had touched a woman,” to fumbled metaphors like, “Her interest in the inquiry had suddenly lost steam,” the prose has the painfully flaccid zip of Raymond Chandler lobotomized with a Wal-Mart weed whacker.

The story is simple yet leaden, and Grisham pushes against it with a mammoth obliviousness. Some random guy staggers into the church reception room and the hot receptionist/pastor’s wife asks him for information and then he explains his name is Travis Boyette and he’s an ex-con and you can almost hear Grisham chuckling at his own cleverness because he’s gotten all that information out there in the course of the narrative itself without having to write explication and that must mean he’s a damn fine writer, right? And shortly thereafter he proves he’s an even better writer because….brain cancer! Boyette’s got it—but he doesn’t show any sign of pain till right after he tells us he has brain cancer because if he said he had a headache earlier it would tip us off.

You can probably see where this is going. No doubt you’ve already intuited not only the existence but also the main character traits of Keith the pastor, who “spent much of his time listening to the delicate problems of others, and offering advice to others” and had therefore “become a wise and astute observer.” Probably you’ve also guessed that Boyette is a bad, bad person (did you figure out he was a sex offender from the fact that he looks at the pastor’s wife’s chest? You did? Bonus points!) If you’re especially perspicacious you may even be able to reconstruct from TV movies past the hollow schlop-schlop of pop theology and pop psychology flopping about like two half-dead fish in a bucket. “It’s human nature. When faced with our own mortality, we think about the afterlife. What about you, Travis? Do you believe in God?”

Travis sort of does and sort of doesn’t, phrasing his concerns in the unforgettably colorless argot of a criminal trapped in a PG-13-rated book written by an author who has, apparently, never seen an R-rated film, much less The Wire. “Damned headaches,” Boyette mutters, because that’s just the kind of filth you expect from career sex offenders. In moments of great stress, he has even been known to resort to a double negative.

From such sure signs we know that Boyette is indeed the worst of the worst. Still, the remorseless demands of plot insist that he feel remorse, and he drops hints that he can clear the name of an innocent on death row. Keith and his wife join hands and turn their faces towards the thick remainder of the book. They are hopeful and unafraid, for they are vacuous imbeciles…and besides, they only have to live it, not read it.