The Slow Procession of Bronx Jesus 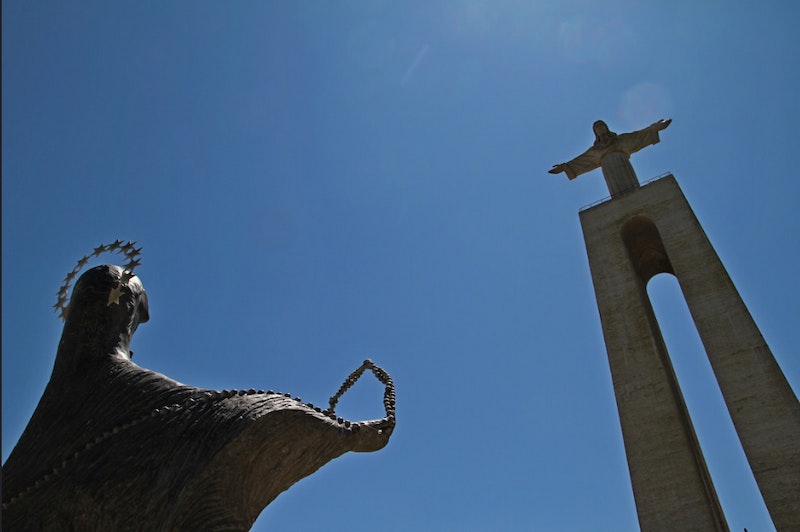 The grimey exit leading out of the Bronx D-train station near 188th Street and The Grand Concourse usually rises to meet a cluster of street vendors, food carts, and nervous commuters, but on Friday afternoon, March 25, 2016 the usual suspects were nowhere to be found. Instead, at the top of the stairs a throng of excited onlookers and stoic police officers stood mesmerized by a strange theatrical outburst.

It quickly became clear that this was no crime scene. Children scampered and fidgeted, shouting and laughing while their parents and other adults stood by smiling and chatting calmly amid the ever growing throng, which almost resembled a giant caravan as it lurched forward following a distorted electronic voice.

A lo-fi PA speaker was mounted atop a small, banged up box truck that moved down 188th. The following words were crudely painted on the truck:

As the truck's backdoor was wide open, I could see a person seated inside talking into a microphone connected to a sound system. The ambient drone of an electric generator hummed in the background as this solemn orator recounted an ancient narrative, alternating paragraphs in Spanish and English. A few feet away from the box truck's cab a group of men, women, and children dressed in weird costumes led the way.

188th was closed up to Elm Place where the procession would eventually make a sharp left turn. With fifty feet on either side of them, bathed in long urban shadows, the wandering actors played their roles to the hilt, never breaking character for even a second. In particular, a group of about twenty women and young girls dressed in multi-colored/fluorescent nun outfits formed the procession's head, moaning up an inconsolable storm. I couldnt get close enough to tell if any of them were actually crying, but their mournful sound was one of the most chilling, harsh noise assaults I've ever known.

Just a few feet behind them was the source of all the commotion: a large bearded man dressed like Jesus Christ, thorny crown and all, dragging a heavy wooden cross, flanked by two other cross-bearing men dressed as The Penintent Thief and The Impenitent Thief, the two criminals who according to the Bible were crucified alongside Jesus on Mount Calvary. Angrily prodding and taunting them from all sides were about 6 or 7 men wielding long plastic spears, dressed in wacky plastic Roman guard costumes. One guard who was particularly striking was a sullen guy wearing a shiny breast plate molded into the form of perfectly sculpted six pack abs. The same angry guardsman also wielded a harmless rubber whip which he repeatedly smacked against Jesus' back with sadistic glee shouting "Move!" over and over again—his venomous snarl and evil scowl made the word seem more like a foul expletive than a stern order.

As the sidewalk met the street, a shiny nylon rope laid limp on the ground. People standing on the sidelines silently picked up the rope and held it in place a few feet off the ground as they moved forth slowly along either side of Bronx Jesus' procession. These folks wore non-descript casual clothing, they werent clergy, they weren't police or security officers, and they had no special badges indicating their status as event staff for the procession. As far as I could tell the rope was there to make sure that the audience would know exactly where to stand during the performance and everyone who held it in place was nothing more than a conscientious spectator.

The weather that day was perfect—a bright blue sky, about 70 degrees, a gentle wind rustling through Bronx Jesus' long locks, the whole scene almost looked like something from a low budget 80s music video.

I glanced over at the crowd to see a small boy pointing skyward and tugging on his mother's shirt. The mother laughed a little and then bent down and said something in Spanish to the child. He looked quizically back up into the air. What he saw wasn't a dove. Instead it was a graceful plastic bag tossing and turning arrhythmically hundreds of feet up in the air, lost in a hallucinogenic ballet, gleaming in the late day sun.

As I continued to walk my eyes followed the plastic bag's airborne adventure, but when I glanced down for a second I saw my foot hovering over a small pile of dirty, used hypodermic needles. I jumped back and caught my breath. At this point I was about a 30 feet from the corner of Elm and 188th and out of range of the procession. The sketchy syringes were piled here neatly at the curb, as if someone had been sitting in a parked car and opened their door to place them on the ground with great care.

I scanned the pavement to see if any other syringes were lying around and if there were any little kids playing nearby or anyone else who might need to be warned about the dangerous paraphenalia. The coast was clear, so I moved on towards Webster Ave. Over there it was business as usual in the two blocks that spread out between Fordham Road and 188th, a part of the always manic Fordham Road shopping district. I stopped into a Jamaican carry-out, bought a small sloppy container crammed with curry, and headed home.