Dave Eggers and The Myth of Print's Importance

The novelist and nonprofit mogul's got heart, but he's too romantic about newspapers to make sense out of their demise. 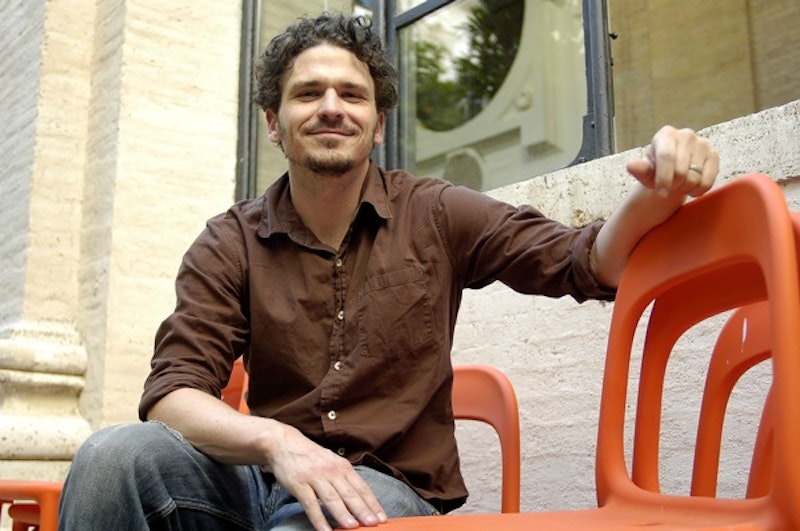 Dave Eggers, McSweeney’s magnate and author of A Heartbreaking Work of Staggering Genius, recently gave a speech at the Authors Guild in Manhattan, where he was celebrated for his charity work through 826 National. It sounds like a perfectly nice fauxhemian black-tie industry-soothing time, but the event only became news when Eggers ended his speech by declaring,
The written word—the love of it and the power of the written word—it hasn’t changed. It’s a matter of fostering it, fertilizing it, not giving up on it, and having faith. Don’t get down. I actually have established an e-mail address, deggers@826national.org—if you want to take it down—if you are ever feeling down, if you are ever despairing, if you ever think publishing is dying or print is dying or books are dying or newspapers are dying.
I was skeptical (as I usually am about Eggers’ treacly mix of downtrodden-enablement and excessive earnestness) but wanted to let the man speak for himself. So I sent him an email about Splice Today, saying that we launched in March of ’08, we’ve had good numbers and prominent links since, but our finances are as uncertain as any other web-based, advertising-dependent media entity. His response, in full:

Hello and thank you so much for writing. I feel honored that you would take the time to reach out and in many cases tell me your very real struggles with writing and work and the future of the printed word.

I have a few thoughts to share, though unfortunately in this space I can’t detail all the reasons I think we have a fighting chance at keeping newspapers and books alive in physical form. But before I do blather for a few paragraphs, I should apologize for sending you a mass email.

As you probably know, a few weeks ago I gave a speech to about 100 people in New York, and I didn’t foresee it getting out there on the web. (Shows how much I know.) And I really didn’t expect this email address to be given out. Again, though, that was my lack of foresight. And I’m an infrequent emailer, so I’m unable to respond to most of the (plaintive, beautiful, heart-ripping) emails that have been sent to me these past few days. So I apologize for not being able to answer your email personally. Or at least not in any timely manner.

Anyway. I would like to say to you good print-loving people that for every dire bit of news there is out there, there is also some good news, too. The main gist of my (rambling) speech at the Author’s Guild was that because I work with kids in San Francisco, I see every day that their enthusiasm for the printed word is no different from that of kids from any other era. Reports that no one reads anymore, especially young people, are greatly overstated and almost always factually lacking. I’ve written about youth readership elsewhere, but to reiterate: sales of young adult books are actually up. Total volume of all book sales is actually up. Kids get the same things out of books that they have before. Reading in elementary schools and middle schools is no different than any other time. We have work to do with keeping high schoolers reading, but then again, I meet every week with 15 high schoolers in San Francisco, and all we do is read (literary magazines, books, journals, websites, everything) in the process of putting together the Best American Nonrequired Reading. And I have to say these students, 14 to 18 years old, are far better read and more astute than I was at their age, and there are a million other kids around the country just like them.

These kids meet every week at McSweeney’s, and things at our small publishing company are stable. We’re a hand-to-mouth operation to be sure, but we haven’t had to lay anyone off. To some extent, that’s because we’re small and independent and have always insisted on staying small and independent. We take on very little risk, and we grow very cautiously. It’s our humble opinion that the world will support many more publishers of our size and focus. If you can stay small, stay independent, readers will be loyal, and you’ll be able to get by publishing work of merit. Publishing has, for most of its life, been a place of small but somewhat profit margins, and the people involved in publishing were happy to be doing what they loved. It’s only recently, when large conglomerates bought so many publishing companies and newspapers, that demands for certain margins squeezed some of the joy out of the business.

Pretty soon, on the McSweeney’s website, www.mcsweeneys.net, we’ll be showing some of our work on this upcoming issue, which will be in newspaper form. The hope is that we can demonstrate that if you rework the newspaper model a bit, it can not only survive, but actually thrive. We’re convinced that the best way to ensure the future of journalism is to create a workable model where journalists are paid well for reporting here and abroad. And that starts with paying for the physical paper. And paying for the physical paper begins with creating a physical object that doesn’t retreat, but instead luxuriates in the beauties of print. We believe that if you use the hell out of the medium, if you give investigative journalism space, if you give photojournalists space, if you give graphic artists and cartoonists space—if you really truly give readers an experience that can’t be duplicated on the web—then they will spend $1 for a copy. And that $1 per copy, plus the revenue from some (but not all that many) ads, will keep the enterprise afloat.

As long as newspapers offer less each day—less news, less great writing, less graphic innovation, fewer photos—then they’re giving readers few reasons to pay for the paper itself. With our prototype, we aim to make the physical object so beautiful and luxurious that it will seem a bargain at $1. The web obviously presents all kinds of advantages for breaking news, but the printed newspaper does and will always have a slew of advantages, too. It’s our admittedly unorthodox opinion that the two can coexist, and in fact should coexist. But they need to do different things. To survive, the newspaper, and the physical book, needs to set itself apart from the web. Physical forms of the written word need to offer a clear and different experience. And if they do, we believe, they will survive. Again, this is a time to roar back and assert and celebrate the beauty of the printed page. Give people something to fight for, and they will fight for it. Give something to pay for, and they’ll pay for it.

We’ll keep you posted throughout the summer about our progress with this newspaper prototype, and any other good news we come across.

Thanks for listening for now,
Dave

P.S. The email address you wrote to—deggers@826national.org—is a new one I set up to give to the attendees of the Author’s Guild. I won’t be able to check it very often, as I’m slow with email to begin with.

Let me first say that Eggers does yeoman’s work with 826’s various physical sites and their fundraising efforts; the company helps kids to better read and write, and Eggers and his staff put a huge amount of work into it. Let me also say that McSweeney’s, whatever your opinion on their content or ethos, does in fact follow through on Eggers’ stated desire to make print media attractive. Their designs, both for the quarterly and their hardcover book series, are consistently innovative and beautiful. So the man makes good on his biggest promises.

But let me also say that Dave Eggers, insofar as can be gleaned from this email, has his head up his ass with regards to the decline of print media.

His generalization that “Publishing has, for most of its life, been a place of small but somewhat profit margins, and the people involved in publishing were happy to be doing what they loved. It’s only recently, when large conglomerates bought so many publishing companies and newspapers, that demands for certain margins squeezed some of the joy out of the business” is backed up by the useful industry history in Gideon Lewis-Kraus’ recent Harper’s essay on the Frankfurt Book Fair. And Eggers’ insistence that “As long as newspapers offer less each day—less news, less great writing, less graphic innovation, fewer photos—then they’re giving readers few reasons to pay for the paper itself” has truth to it. Certainly the newspaper industry has failed to give the buying public a reason to invest in their product.

What’s strange is that Eggers defends that industry against its detractors despite acknowledging how badly it’s been run. In any other industry (other than GM’s), a company that fails to build its product or adapt it to the changing marketplace will—and should—fail. To argue, as Eggers does, that the newspaper industry somehow deserves to continue on just by virtue of its being vaguely “important” is to fall prey to the same bogus “newspapers are essential to democracy” line that many intelligent people have clung to over the past year. (Notice how Eggers' statement that "the printed newspaper does and will always have a slew of advantages" goes unspecified.) Reporting, photography, and commentary will always have a place in our culture, but that place has nothing to do with whether they’re published on newsprint, HTML editors, tree bark, toilet paper, or cheesecloth. Ideas are ideas and news is news. Newspapers’ dominance as the most cost- and distribution-effective medium for those ideas is little more than a happy capitalistic accident. Now its time has past, but a profitable replacement hasn’t yet been invented. Hence the confusion, the job losses, the “plaintive, beautiful, heart-ripping” cries from the casualties of a dying industry.

Eggers is a literary man above all, which is why he seems to get his signals crossed. As a medium for news, newsprint’s decline is inevitable and unstoppable. But that’s because the competing medium—the Internet—is free. There’s no equivalent for books yet, unless one counts the Google Books feature, which, while an incredible resource, is still unreliable in terms of book availability and scanning quality. Sure, there’s the Kindle and the various forthcoming e-readers, but those still require a significant up-front sum and roughly $9.99 a book—a price that many publishing industry insiders have said is unsustainably low.

When Eggers' hometown San Francisco Chronicle publishes a news story, the entire thing—photos and copy—becomes available for free on their website. But when Simon & Schuster publishes a new novel, cookbook, or memoir, you still either have to either pony up $25 for the hardcover or pay $9.99 to get it downloaded to your $300 Kindle. This is why the industries aren’t really comparable. Eggers is right to want to save the publishing industry (and, as his business sense and success with McSweeney’s indicates, the bigger houses would be lucky to have him or a kindred soul at the helm). But his insistence “that if you rework the newspaper model a bit, it can not only survive, but actually thrive” isn’t germane; newspapers have a different function in society than publishing houses, and that function is fulfilled more ably by online outlets. I hope someone will come up with a way to profitably replace the newspaper model for reporting and news coverage, but to argue that newspapers, by virtue of being recycled trees, are inherently worthy of saving seems disingenuous. Let the medium die; it’s the writing that matters.