The disappearance of penmanship. 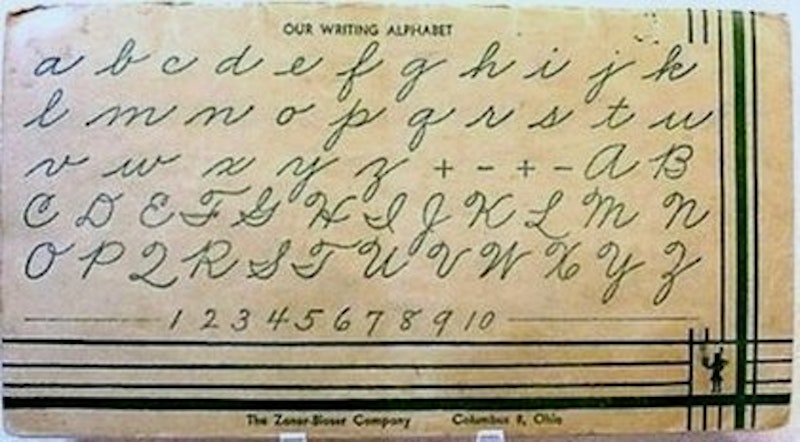 “I don’t know how to read this because you’re the only one who writes that way,” my eight-year-old son said, glancing down at the handwritten note written in cursive that I’d left on the kitchen counter.

And then I stabbed myself in the neck with a sharp kitchen knife and died and now you’re reading this because it turns out that my ghost could possess my aging MacBook. Seriously, I was incredulous. “What do you mean you can’t read cursive handwriting, honey? This is the way mommy writes, but a lot of other people write this way too.”

“Oh yeah, maybe like Grandma and Nanny,” he said, referencing his grandmothers.

“Doesn’t your teacher write this way?”

I’d heard rumors of the school systems getting rid of this allegedly outdated form of writing, and it turns out that 45 states last month adopted core curriculum standards that drop cursive handwriting. Maryland is one of a handful of states proposing measures to continue teaching the writing form. I’m not sure why they didn’t drop algebra instead, because in a school subject smackdown, I’ve used handwriting a lot more than algebra over the years.

But the world is stupid and here we are, with second graders who don’t know how to read cursive.

I love handwriting. In Catholic School, not only were we taught handwriting, we were graded on it as a subject. I aced it every time, got a calligraphy kit for Christmas when I was 12 and have been writing with calligraphy pens ever since. I still prefer writing or receiving a handwritten communication to any other form.

I’m not the kind of mom who flies the broomstick over to school buildings on issues involving my kids; I’m a free-ranger versus a helicopter parent. But I’d be the first to sign “Save the Handwriting” petitions, attend school board meetings, and, naturally, write letters to convince people that we can’t let the beautifully written word fall by the wayside.

I will homeschool this if I have to: buy cursive alphabet instruction kits, tell my kids all I want for Christmas is handwritten letters, give candy rewards for penmanship; I’m not beyond flat-out bribery. But I will not raise kids who don’t know how to read and write in cursive. I work on the Internet and accept that my children communicate primarily via text message, so I’m no Luddite. But I positively refuse to believe that cursive handwriting is dead, and I won’t be a part of letting it disappear.