A salty aquarium docent talks and talks until he’s booted away. 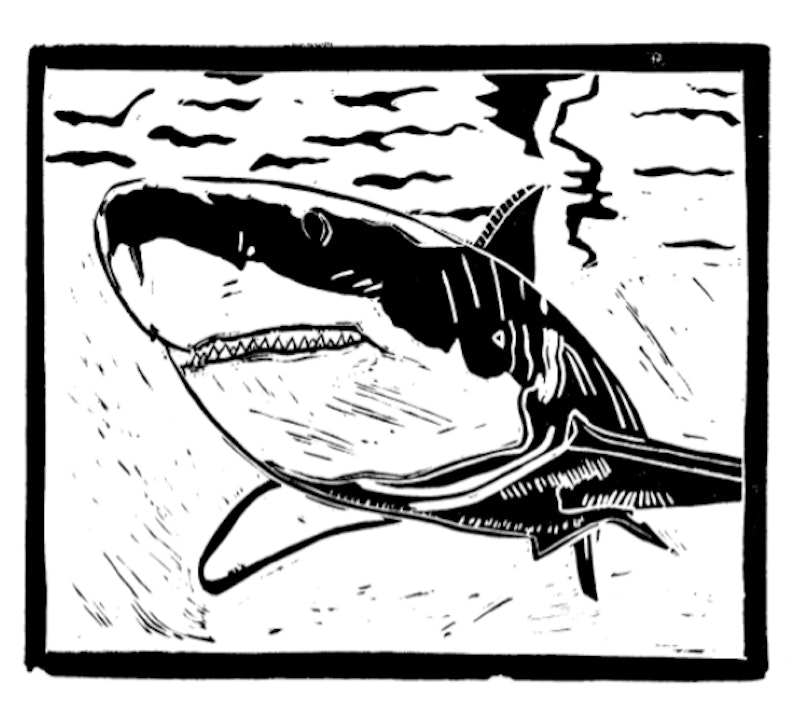 In 2011, my wife and I visited the Monterey Bay Aquarium. We were excited to see the recently caught juvenile Great White Shark, pushed through the human lemmings and planted ourselves in front of the thick tank glass. Before long, the Great White cruised past us: it was beautiful, streamlined like a torpedo, teeth sharp as a saw blade.

We expected to see the shark swimming in an empty tank, but instead, the tank was teeming with tuna, manta rays and pilot fish. Most of the fish kept their distance, but a few dared to pass a few feet in front of the Great White’s mouth. The Great White ignored them.

“Aren’t those other fish scared,” I asked my wife.

“They like it,” the aging docent in the corner said. He had soft white hair, a white suit and a hand-scrawled nametag that read “Clifford.”

“We used to have a tiger shark in there. After it died, the other fish starting fighting, acting erratically, bumping into walls. They didn’t know who was in charge and didn’t know how to behave. As soon as we introduced the Great White, they all calmed down. They knew their pecking order again. Animals need to have an alpha dog around. People are the same way: we need someone with bigger balls than us, otherwise we start acting like assholes.”

A couple standing nearby with a young child gave the docent a dirty look and walked away. They didn’t appreciate his salty tongue. My wife and I, on the other hand, loved it.

“Does the shark have a name,” I asked.

“I call him Morty because he doesn’t chew his food. He swallows it whole like my brother Morty.”

My wife and I laughed.

“He also shits like Morty—all over the place and when you least expect it.”

The Great White propelled itself forward in a side-to-side motion. Its eyes were black, it’s snout covered with scars, a chunk gone from the back of its dorsal fin.

“How long do Great Whites live?” I asked.

“In the wild they can live up to 90 years old. In captivity, they’re screwed. If we don’t get this bastard back in the ocean he’ll be hanging on someone’s living room wall by Christmas.”

“Something alive. Great Whites don’t like dead fish, they need the thrill of the kill, lots of thrashing and blood and guts all over the place. The aquarium feeds them after hours. They don’t want the little kids crapping their pants from fright.”

The docent was on a roll, his patter a kind of spontaneous geezer rap interspersed with quirky bits of trivia. “In the last 10 years there have been 66 great white shark attacks on humans. Fourteen fatal. You know how many sharks we killed in that same period?”

“I didn’t know there were that many sharks in the ocean,” I said.

“Not anymore. We kill them because we’re scared of them. In a fair fight they’d tear us apart. I keep waiting for somebody to fall in the tank and give us a real show, and broadcast the whole thing live on the internet shark cam. That’d be great for business, don’t you think?”

“You ever hear the joke, ‘What do you do if you’re attacked by a great white?’”

“You hit him in the snout. If that doesn’t work, try hitting him with your stump.”

Suddenly, two security guards pushed through the crowd towards the docent. “Clifford,” one of the guards said. “How many times have we told you, you are not allowed in the aquarium.” They each grabbed one of the docent’s arms and escorted him away. No one was watching the Great White Shark anymore. We were all watching a more endangered creature. A great white docent whom I suddenly realized I would never see again.