We were the latest generation of future failures. 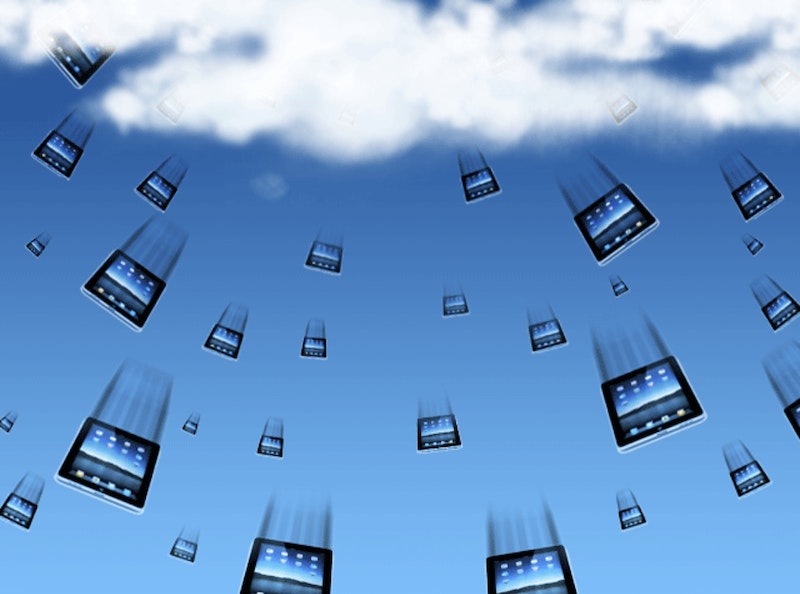 The rain was an alphanumeric storm of surveillance. The rain was steady but silent, more like a windless blizzard of fresh powder, sticking to everything and weighing nothing; weighing us down just the same in an endless deluge of light; of machines talking to each other without saying a word; of the conversion of keystrokes into criminal convictions. The rain marked the end of summer. The rain marked our first semester of college.

The rain made our PCs PC compatible, flooding them with disinformation while patching them to block even a teardrop of truth. Not that we cared. We were the many, the wait-listed, the deferred, the denied. We were Stamford in the East, not Stanford in the West. We were debtors with credit, in search of 120 credits. We were the class of 2024.

We were a chapter in a Conradian tale of plunder, servitude, and piracy. We were a stopover between Telegraph Bay and the Gulf of Guinea, one point in a multi-colored map of tilings, triangles, tangents, and butterfly curves: a kaleidoscopic illustration of sea lanes as string art, where cargo ships take the marrow of the earth—the smelted minerals of modern life—and return the finished goods to Amazon warehouses and fulfillment centers worldwide.

We were the last generation of first-generation PCs whose innards were soldered or touched by human hands. We were the last class to catch a wisp of smoke, via the trade winds, from hell on earth; to have gaseous molecules of sebum and plastic dissolve into vapors; to breathe burning oils; to inhale the oxygen of dead bacteria and deadly metals.

Beneath a canopy of lights, between the constellations of Ursa Major and Minor, I sailed the sky. I sailed with a globe at my feet and a sextant at my side. I sailed the night in the light of day, from a velvet chair with brass nails, inside the home office of Edward Lawson, criminal defense attorney and secretary of the local astronomy society. He summarized my case.

—You scorched his balls. They had to graft them. They’re calling him “Harvey Harvard.”

—His balls? You name your dick, not your balls.

—Please. I don’t want to know.

—My name’s on the complaint.

—Nothing. You spilled a 170-degree cup of coffee, no cream, on his groin. A venti. His mother says the skin grafts make him look like Harvey Weinstein’s gangrous, surgically reconstructed penis.

—You never said anything about his penis.

—His balls! The balls on you, kid. What were you thinking? This is a hate crime.

—And that’s an aggravating circumstance.

—The coffee, sure, but not Harvard. You stole a Harvard-issued iPad. You stole intellectual property. You saw an AR-version of “Ideology in Contemporary Chinese Politics.” You committed grand larceny. That’s the cost of the course, the iPad, the Pencil, the Magic Keyboard, the library of Apple Books, including $25.99 for the audio version of Evan Osnos’s Age of Ambition: Chasing Fortune, Truth, and Faith in the New China.

Even worse, you got an A for your short paper on origin stories. And I quote, “China’s origin as a successor to Japanese imperialism and American colonialism is a story of restraint. Unlike Japan’s occupation of sundry Asian countries, and unlike America’s appropriation of land and peoples, from which the U.S. continues to fire cultural salvos toward Korea (North and South), Laos, Cambodia and Vietnam, China’s origin as a superpower is less jingoistic and interventionist than our current regime in Washington, DC.”

—Not unless you’re gay.

—I don’t care. You fired your own salvo. You did a Dresden on Harvard.

—More like Hiroshima. Nagasaki is closer to China, though.

—Tell me how you escape the blast radius, genius.

—So did Gerald Ford.

—I deserve an unconditional pardon.

—Don’t we all. What about football?

—Better if a brain surgeon did.

—I’ve got a guy. We take some X-rays. We do some scans. Get the doctor to say you’re more concussed than Ali.

—You never wrote it.

—You’re retarded. We say it was the kid’s. You couldn’t have written that shit. As far as we’re concerned, the course was Chinese. You didn’t understand a word.

—We get Harvard to write Colin Kaepernick a check.

—Probably. I gotta ask. My daughter’s a junior in high school. You “attended” Harvard. What was it like?