“The Parking Lot is Full” is the best webcomic you’ve never heard of. 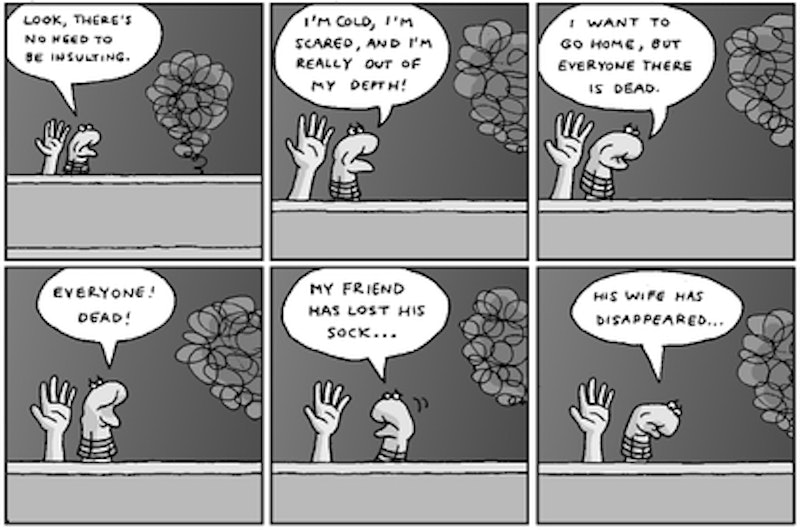 Reading through the Sunday edition of the Herald Mail (Hagerstown, MD's local paper), I am again let down by the comics. I should have expected as much. I mean, sure, “Pearls Before Swine” was pretty good, and “Garfield” made me smile, but there's nothing that actually made me laugh—you know, the way comics are supposed to and all. “B.C.”: Not funny. “Doonesbury”: Annoying. “Mary Worth”: I don't even know what the hell she's talking about. And then there's “The Family Circus”, and it's always the last comic on the page. I know “The Family Circus” isn't funny, okay. It's never been funny. But I read it anyway. And then I spend all day thinking about how if I ever meet Bil Keane I'll punch him in the face. You hear me, Keane?

Most days I don't even look at the newspaper comics. I mean, what's the point? Who needs that kind of hassle? Especially when the Internet is full of all kinds of actually funny comics: “Toothpaste for Dinner” and “Married to the Sea” (both by Drew and Natalie Dee); “The Perry Bible Fellowship”, Brad Neely's (of George Washington video fame) all-too-infrequently updated “Creased Comics”, “A Softer World”, “Idiot Comics”, “Questionable Content”, and so on. I won't include “XKCD”, because now it's usually about Linux or Java or the 9-to-5 or something that I don't know or care about. It's like “Dilbert” for hipsters. And I'm sure there are plenty of really good webcomics I haven't read but would really love if I did. But those are the ones I read most days.

But here's my problem: Most Internet comics, even sometimes the ones I just mentioned, don't really take full advantage of the fact that they're Internet comics. It's online, and you can get away with anything you want: Sex, drugs, the F-word (I mean, fuck), offending religion, politicians, etc. And you don't have to worry about whether the editor at The Gary Post Tribune or some other shitty newspaper will complain. Sure, “Married to the Sea” can be pretty damn bawdy, and “Garfield Minus Garfield” or the “Nietzsche Family Circus” are hilarious postmodern(ish) examples of re-thinking what a comic can be, but too often the webcomics I read are as dull as “Fred Basset.”

Anyway, for those of you as bored as I am, there's hope: “The Parking Lot is Full” is, and I say this with full confidence, the best webcomic you've never heard of. In fact, for anyone who has heard of it, your next drink is on me. Hell, make it two (mail me your bar tab). Because since coming across “PLIF” when I was 17, I have never met anyone who has heard of it—no matter how many webcomics they read. Even a Google search doesn't turn up much.

Started in 1992 by Jack McLaren and Pat Spacek when they were undergraduates at the University of Waterloo, “PLIF” was originally published in one of the university's student papers. A year later, after graduating, Spacek moved to Korea while McLaren stayed in Canada. The comic, however, now posted weekly online, continued through Internet and email collaboration—maybe the first webcomic to do so. As McLaren put it, in an old interview with Fade To Black magazine, "When we lived in the same city, Pat and I used to get together to discuss the strip… you know, what strip to use next, how to lay out the drawing, how to word the caption. Naturally, when Pat moved to Korea, we had to learn to computerize that aspect of strip production as well. The Internet's e-mail and web page facilities proved to be a decent solution." Spacek wrote the captions and dialogue and McLaren interpreted from there. What they came up with was brilliant dark comedy, often commenting on American consumerism, organized religion, and socio-political injustice.

For the most part, McLaren and Spacek worked with one-panel comics, and the latter was always trying to figure out how to do more with them. As he put it in Fade to Black, "How much can you fit into that limited form without overburdening it and losing the joke? Nobody I've ever seen seems the least bit interested in finding out. Nobody but us. So, apart from the fact that single-panel is one of the classic cartooning formats, and works aesthetically, it also provides a huge challenge to me as a writer."

Recurring comics include "Scene from a Movie," "Little Known Fact," and 2002's 11-comic series about a couple of sock puppets—which, to be honest, aren't as good as earlier comics. McLaren and Spacek know something about middle-class, middle-age anxieties, and their comics take them about as far as they'll go. Fade to Black asked Spacek, "If you were forced to go with a single character strip, what would be some of the characteristics you would want him or her to possess?" Spacek answered, "I'd probably end up writing the kind of characters Kafka always used to do. Wimpy losers crushed by forces they don't understand, able to dredge up some kind of dignity but not being able to make it mean anything. Someone with an unconscious streak of masochism." That's how most of his characters turn out anyway. And though some of the comics are obvious throwaways (though still disturbing and funny), their best comics remind us that comics themselves are an art, and, as McLaren puts it, are best "when they tap into something deeper than pure absurdity or straight-out offensiveness." I'm hoping some of today's comics will figure that out.