I've Got a Broken Face

The author shows off her scars and recounts several gnarly bike crashes. 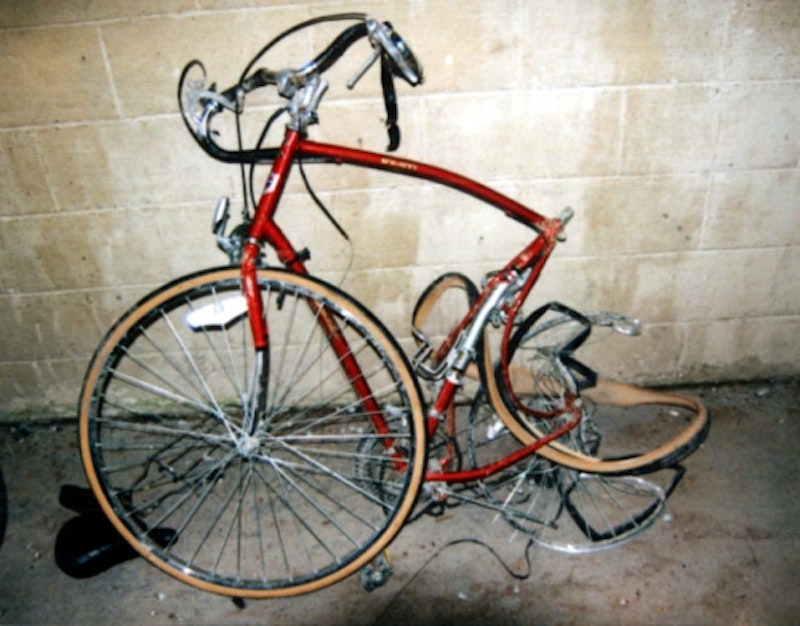 The last time I was this ugly was during my sixth-grade braces and bowl cut phase. It’s partly my outfit (denim on denim), pedicure (chipped), and hair (flat, frizzy) but it’s mostly my face that has made people avoid eye contact with me in the last few days. My face isn’t just ugly right now; it also hurts due to wrecking my bike a few days ago. It was my first sober wreck since I got my training wheels off and the most damaging yet. The right side of my face is covered in road rash. It just looks like moderate sunburn on my cheeks, but my jawline reveals what’s underneath all those layers of skin: flesh and blood and a lot of pus. But as ugly as my face is right now, it’s as milk-smooth compared to my hands (which look like they were repeatedly burned with cigarettes like I’m a mob snitch or an enemy combatant), and my knees; one is a deep purple quickly moving to green and the other is covered in a delicate yellow scab that keeps getting ripped off by my jeans.

It’s been three days since the wreck and I’ve been trying to take the correct steps to ensure a speedy and successful healing, but the wounds are deep and I fear scars will be difficult to prevent. Besides, I refuse to pay money for things I can’t ingest (soy bacon, Perrier, drugs) or live in (house, car) and so I’m using the antibacterial soap in my office bathroom instead of Neosporin. With the exception of my face, I won’t be upset if these injuries leave permanent reminders on my skin. Additional scars may even lend some symmetry to my body; my right elbow will match my left, as it hasn’t since I drunkenly biked into a stop sign a few years ago and was helped to my feet by a bum, whom I thanked and gave a quarter. My right shin will now mirror its counterpart, with a long scar running below my knee from the first time I shaved my legs, unaware that water and soap is key. A few more scars are just a few more scars on a body covered in them.

While most of my scars are the direct result of careless actions like the aforementioned bicycle and body hair accidents, my earliest scars come from being born imperfect. I’m not missing a leg or an arm and all of my body parts are in roughly the correct places, but I was born with a tumor on the middle finger of my left hand. After several operations to remove the tumor, it’s not something you would notice if we weren’t comparing the size or our hands or the lengths of our fingers, but it doesn’t take too close inspection to see. The skin on my middle finger (or my fat finger, as my family calls it) is thick and pink and there’s a dime-sized lump on the side. The skin itself is actually from my hip, grafted after my fat finger turned purple and started bursting blood vessels when I was five.

The subsequent surgery was not entirely successful, and there were other attempts to improve my finger’s appearance. One doctor, afraid that the tumor would turn malignant, advised my parents to have my middle finger amputated. My dad, tired of sleeping on chairs pushed together in hospital rooms every time a surgeon tried to fix my finger, thought amputation was a good idea. As he told me later, “It would have looked perfectly fine but you would have had trouble counting past nine.” My mom wanted a second opinion and the surgeries continued (five total) until my finger settled into its current state--ugly and asymmetrical, but still there.

Besides an imperfect finger, I was also born with an imperfect skull. This isn’t because of a mutation like my tumor, but because my mom went into labor very suddenly and as my dad drove to the hospital my head started to crown. He pulled the silver Dodge Omni into the parking lot of Pedro’s Fine Mexican Food and pushed me back in. I’m convinced that this is why the top of my skull is flat. No one else agrees with me, but as my twin sister’s head is perfectly round, I'm sure it was my impatience to enter the world that flattened my head.

Despite these two imperfections from birth—one of which is an advantage when I carry things on my head—and being prone to alcohol-induced bike wrecks, my body has been good to me. I’ve gone through periods of drinking more alcohol than water and yet I’m very healthy. I’ve chain-smoked and stayed up for days and once took anti-anxiety pills meant for aggressive dogs and yet I haven’t had a cold since smoking pot in the walk-in fridge in the kitchen where I worked three years ago. I've gone years between exercise more taxing than throwing darts at bars and I eat food made in New Jersey chemical plants. Maintaining good health through food and exercise is far less interesting to me than guinea-pigging a new strain of LSD or sampling every whiskey in the bar and going for a bike ride, yet my body stays surprisingly fit. I still have a runner’s build even though the last time I ran was to the jungle gym in third grade. I can swim and climb and stand on my head indefinitely. And until recently, I only had to think about exercising to lose weight. As I’ve aged, however, I’ve realized that my butt is going to settle and my hips are going to expand and my boobs—small enough now to seem impervious to gravity—are not going to hold their own weight forever.

It was this concern that led to my bike wreck last week. I was attempting to exercise for the first time since my gym membership lapsed two years ago. My bike was newly tuned and it was a nice Sunday afternoon, so I decided to go for a ride. I made it about two miles before I crashed. It wasn’t debris in the road or a swerving car or margaritas at happy hour that caused this accident, it was my iPod, which shuffled to my least favorite Beyonce song. As I reached into my pocket to skip to the next song, I lost control and skidded to the ground. I hit the flat part of my head first and then my face, hands, elbows, and knees scrapped along the road. Thankfully, my bike was unharmed, and I wasn’t so hurt that I couldn’t get back on. As I rode the two miles home, blood streamed from my chin down my shirt and onto my bike. It dripped onto my front tire left a track of red on the road.

There have been many accidents, some dramatic, some too pedestrian to clearly recall. I’ve forgotten which scars came from which wreck. I can’t remember if the L-shaped scar on my left elbow is from last summer when I fell off my bike on the way home from a lesbian bar—a damp place where all the women wear cargo pants and “Life is Good” shirts—and was stopped by a cop, who put my bike in the trunk of his car and drove me home. Or was it from a few winters ago when I wrecked on my way home from the Egyptian Room, a converted pawnshop with cheap drinks and bars on the windows? I know the scar above my lip came from my most expensive accident, which broke my front tooth and left me with a scab below my nose that looked like a Charlie Chaplin mustache from a distance.

That particular accident occurred on Inauguration Day 2008 when bars opened early to celebrate our new president. I took advantage of this occasion for morning drinking and tripped off the sidewalk walking home. I didn’t even attempt to break my fall and my hands and knees, those parts of the body that most often bare these superficial wounds, were unscathed. A taxi home would have saved me the pain and the dental bills, but I walked, and tripped, and spit out my front tooth on the street. As I sat in the dentist chair later, my mouth forced open with plastic things that reminded me of a speculum, I told myself that was be the last time I got too drunk to get home healthy. The L-shaped scar on my left elbow is not, I am sure, from my scariest bicycle accident, which left me with only a busted chin when it could have killed me. I didn’t ride away from that accident but was taken to the ER by paramedics even after arguing that hitting my head on the road without a helmet was nothing a nightcap and a few hours of sleep couldn’t fix. After we got to the hospital, I gave the intake nurse a fake address and told her that my name was Jane Carney—my middle school nemesis who told everyone that I peed when I coughed—and left the hospital when no one was looking, bleeding and wearing a neck brace. The scar on my chin is visible only after a summer in the sun, but I have a blue hospital bracelet with my old enemy’s name on it to remind me of how very lucky I was that time and all the rest.

As I write, the wound on my inner elbow badly burns. I hurt, and I’m ugly, but I’m glad that it was exercise and an iPod that caused this accident and not a half-dozen drinks. I’m trying at last to be as good to my body as it was been to me, to get scars from bike rides on Sunday afternoons instead of late at night, walking or riding or stumbling home with bloody knees and scrapped elbows. When these new scars are faded but still visible in certain light, I’ll have no story to tell about sneaking out of the hospital or looking like Charlie Chaplin or being rescued by a bum, and when people ask me what happened, It was nothing, I’ll say. Just an accident.