Gentlemen on the Record

The most recent 33 1/3 volume looks fawningly at a forgotten grunge landmark, The Afghan Whigs' Gentlemen. BONUS: Video footage so 1994 it hurts. 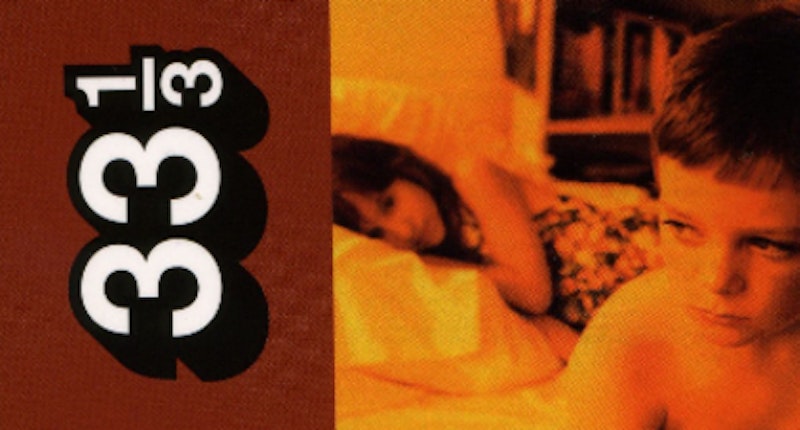 The Afghan Whigs’ third full-length, 1993’s Gentlemen, is a refreshingly anomalous choice for Counterpoint Press’ ongoing 33 1/3 series, which celebrates classic pop albums in book-length studies written by established critics and musicians. With few exceptions, the series has hewed pretty closely to the established pop-nerd canon, covering Dusty in Memphis in volume one and moving through Pet Sounds, Forever Changes, Highway 61 Revisited, Music from Big Pink, Exile on Main St., The Piper at the Gates of Dawn, et al, with occasional dips into more recent indie milestones like In the Aeroplane Over the Sea, Daydream Nation, Loveless, and Bee Thousand.

The Afghan Whigs don’t quite fit into either box; neither a platinum-selling cultural touchstone nor—despite being a first-generation Sub Pop signing—a beloved indie influence, the band has the undistinguished legacy of being one of the most musically interesting grunge bands to emerge in the early 90s. If Nirvana were a 24-track punk band, Pearl Jam and Soundgarden were mopey inheritors of the Zeppelin-style hard rock style, and Smashing Pumpkins were glam-fashioned neo-arena rockers, then the Afghan Whigs had the audacity to fancy themselves a soul band. Frontman Greg Dulli’s lyrics were often harrowing and cathartic in the Seattle vogue—Gentlemen chronicles the painful, protracted breakup of his first adult relationship—but the band kept their hair (relatively) short, wore suits and sunglasses, covered the Supremes, and aspired to the rhythmic tightness of James Brown’s classic JB’s lineup.

These stylistic details overstate the extent to which the Whigs actually sounded like a soul band, however. Any listeners unfamiliar with the band’s latter-day live shows—which featured background singers, a conga player, and full horn section—would probably listen to Gentlemen and hear a slightly funkier version of that year’s typical rock sound: roaring guitars, pounding drums, a singer more inclined to growl than croon. And you didn’t exactly have to be Sly Stone to out-funk Nirvana.

One would have to possess a pretty limited appreciation for the finer points of 20th-century black music to deem the Afghan Whigs worthy of the Motown/Tamla or Stax legacies, and from the star-struck, easily awed tone of Gentlemen The Book, author Bob Gendron appears to possess just that. His book presents a fanboy’s view of a good-to-great record, comparing it to similarly heart-rending classics like Blood on the Tracks or Marvin Gaye’s Here, My Dear, but he doesn’t address the potentially fascinating cultural issues that the Whigs raised: white appropriation of black music; the slippery concept of artistic authenticity; or the bizarre near-rejection of black influence by white 90s rock musicians. Instead, Gendron take the genius of Gentlemen (and Dulli) as a given and proceeds. His book is a missed opportunity to reopen the cultural conversation on a fascinating, frustrating band that nevertheless deserves a reevaluation.

Gentlemen The Book starts strong, with a flashback to a beating Dulli took after a 1998 gig in Austin followed by an informative chapter on the complex musical and cultural identity of Cincinnati, the band’s hometown. These episodes introduce the two major motifs of the book—Dulli’s legendary self-abuse and bad-assedness, and his band’s miscegenation of musical styles, both of which are addressed throughout with near-religious admiration by Gendron. Dulli claims his inspiration for the Whigs’ sound was a pair of concerts he saw as a teenager in the early 80s, Hüsker Dü and Prince, although Cincinnati’s Midwestern location meant that a little country snuck in there too, evidenced in guitarist Rick McCullom’s frequent and effective use of a slide in songs like the Gentlemen highlight “When We Two Parted.”

Gendron limns the band’s trip from local parties to national tours, plus their distinction of being the first non-West Coast band to sign with Sub Pop, the original home to Nirvana and Mudhoney. They released two records on that imprint, 1989’s Up in It, and 1991’s great creative leap forward, Congregation. The latter album is also where the significant anti-Whigs crowd started to grow, particularly in their disapproval of the record’s cover art—a naked black woman holding a white baby—and of Dulli’s increasingly sexualized, self-obsessed lyrics.

There are a number of reasons why a group of white Midwestern college-rockers would be scowled at in 1991 for wantonly borrowing tropes, cover songs, and imagery from black soul music; unfortunately, Gendron just posits the band’s myriad detractors (and Dulli’s refusal to kowtow to them) as evidence of the Whigs’ unquestionable greatness. The growth of indie labels like Sub Pop, SST, and Two-Tone throughout the 80s (wonderfully depicted in Michael Azerrad’s This Band Could Be Your Life) built a music culture that based authenticity on commercial, rather than aesthetic, distinctions. Thus the growth of the lo-fi movement and the community’s increased concern with “selling out.” The Afghan Whigs were groundbreaking in that they mixed the superficialities of indie-defined legitimacy (loud guitars, DIY touring, emotive lyrics) with a total disregard for indie’s asexuality and arbitrary romanticization of lo-fi recording technology.

This is no small achievement, nor was it an economically lucrative one. At the time, rock songwriters were basically either emoting in the Cobain/Vedder/Corgan mold, or draping their songs in non-sequitorial pop culture references like Pavement’s Stephen Malkmus. Either way, early- to mid-90s rock had a peculiarly standoffish relationship to sex, which made Dulli something of a renegade when he wrote lines like “She wants love, and I just want to fuck,” “Zip me down, kiss me there,” or Gentlemen’s most notorious moment, from the song “Be Sweet”: “Ladies, let me introduce myself/I got a dick for a brain/And my brain is gonna sell my ass to you.”

Still, Gendron refuses to acknowledge that, while unique and obviously the product of an authentic love of soul, Dulli’s cultural appropriation and confrontational lyrics often come off as forced or posturing. (He's treading similar territory in his newer band The Twilight Singers, and his collaboration with Mark Lanegan, The Gutter Twins.) The Whigs’ mixture of rock aggressiveness and soul nuance was frequently an awkward marriage due to Dulli’s limitations as a singer and melodicist, and his tiring preoccupation with emotional darkness. This balancing act is central to any discussion of Gentlemen The Album, yet Gendron only wants to discuss the record’s brilliance, with pauses to rail against critics who failed “to capture the essence of a band whose creativity, for better or worse, isolated it.” “There isn’t a fake or false note on the album,” he exalts, occasionally even lapsing into an Olbermann-worthy series of adjectives: “Conflicted, lacerated, claustrophobic, naked, real, out of control… is exactly how Gentlemen sounds.” I was especially entertained by the occasional poetic flourish: “Gentlemen is a masterpiece of a four-headed hydra.”

Please. Gentlemen is a good record, with a few stunning moments when the mixture of rock and soul actually works, but it’s also a frequently juvenile one. (I say this as a guy who encountered the album at a perfectly timed late-adolescent moment, and then slowly grew out of it after realizing that the “dick for a brain” line isn’t really as profound as it sounds when you’re 15.) Gendron basically admits as much when he claims that, during an interview, Dulli’s “expression—cute, curious, mischievous—resemble[d] that of an eleven-year-old who just snuck a long peek at a gorgeous woman in the shower.” Unbeknownst to Gendron, however, that’s exactly the problem with Gentlemen; it’s leering and adolescent more often than haunting, and atonally aggressive more often than mature. No wonder the best parts of Gentlemen are the ballads—“When We Two Parted,” “My Curse” (sung by Scrawl’s Marcy Mays, the lone female presence on the album), and a lovely cover of the Tyrone Davis b-side “I Keep Coming Back.” Everything else just kind of lumbers along in a typically drum-heavy grunge mix, steered by Dulli’s equally unsubtle lyrics. When Gendron laughably compares the record to Richard and Linda Thompson’s stunning Shoot Out The Lights, it only underscores how infantile some of Dulli’s gestures seem when compared to genuine adults confronting similar heartbreak.

Gentlemen The Album is the Whigs record most suited to the 33 1/3 treatment since it has a unifying concept and came the closest to claiming a mainstream audience, but they would go on to perfect their Prince/Hüsker Dü hybrid on their last two records, 1996’s Black Love and particularly on 1965, released in 1998. The former is spottily brilliant but pretty uneven and even bleaker than Gentlemen, but 1965 is a great, unsung record of the 90s, its arrangements a perfect mix of horns, percussion, strings, female background singers, and slide guitar. It’s Curtis Mayfield’s Curtis by way of Dinosaur Jr’s You’re Living All Over Me, with a sense of R&B joy that’s missing from Gentlemen and Black Love. A proper reevaluation of the Afghan Whigs should start with a listen to 1965 and an honest appraisal of their flaws leading up to it; Gentlemen The Book instead falls prey to the trap that the 33 1/3 idea lays: approaching an album with adolescent reverence rather than objective curiosity.