I Approve of the Pagan, All-American Rites of Halloween 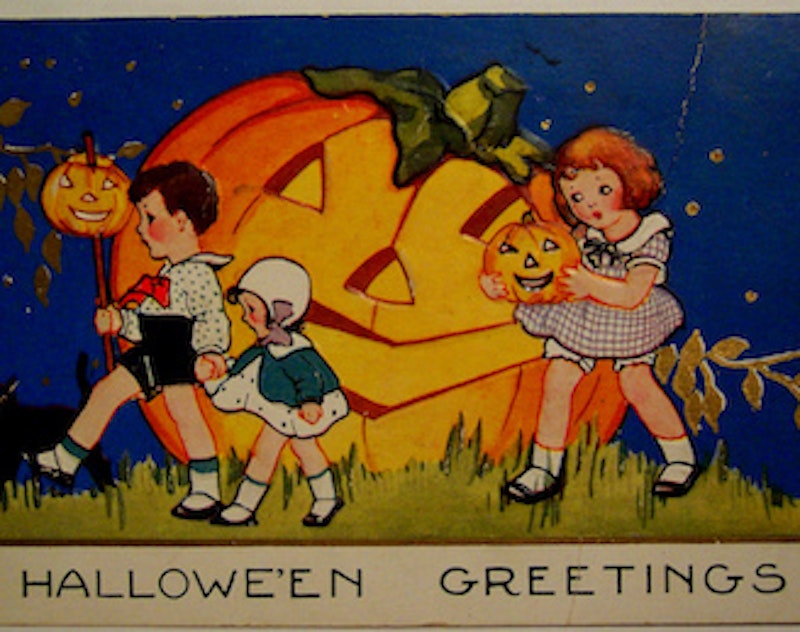 Another Halloween has come and gone, and this year our Benedict Option property was for some reason spared the vandalism to which the local hooligans have traditionally enjoyed subjecting it. So, in a calmer mood, I’ve had the leisure to reflect on this “holiday,” and on my memories of and feelings about it.

Needless to say, perhaps, I grew up eagerly observing the rites of Halloween as practiced here in the Midwest back when my generation was “coming up,” as is said in the wonderful Black American patois. Are those rites observed at all anymore? In this era of fetishized “safety” and overzealous parenting? Since I’ve lived for a long time in an isolated rural environment where trick-or-treating is unfeasible and kids are thin on the ground in general (all the more so since Daughter went off to boarding school this fall), I can’t tell. I lack a sufficient data set.

But I hope those middle-American Halloween rituals haven’t vanished from childhood, such as it is now, because I find, a bit to my surprise, that I have warm memories of them.

One such ritual was the acquisition at the drugstore of cans of shaving cream, the plastic caps of which we’d melt down and, when they were malleable, pierce with sewing needles. The goal was to make the cans into weapons of shaving-cream projection, even to the distance of 10 or 15 yards.

Then there was the merry running wild through the small-town streets on a night crackling with mischievous boyish energy and the tonic chill of autumn; and the convening at my friend Mark’s house for cider and donuts and an appraisal of the tooth-rotting loot we’d collected during our door-to-door pilgrimage; and, of course, the giggling Halloween “circle jerk” in the basement after Mark’s mother had gone to bed.

This last involved the half-dozen or so of us strenuously competing to “finish” first on, or rather into, the slightly hollowed-out Reese’s Cup that perched atop Mark’s Bart Starr replica Green Bay Packers football helmet, there at the hub of the circle that our shuddering, sweating bodies described. (Our erect penises, I suppose, were the wheel’s spokes. I hesitate, meanwhile, to make explicit what culinary fate awaited the boy who “finished” last in these harmless tests of manual dexterity, but anyone familiar with the hijinks of an all-American boyhood will have a good idea already.)

My growing up, it occurs to me, was contemporaneous with the rise to power in America of the Evangelical movement, which had a strong effect in Indiana, even if it didn’t achieve here the dominance that it attained in the South. It seems to me that by the time I was an adult the Evangelicals’ disapproval of Halloween as a wicked debauch had filtered down to the culture more broadly, so that Halloween was less widely observed for a while—until it was resurrected as a result of the Evangelicals’ eclipse and the concurrent mainstreaming in our culture of the homosexual subculture. Homosexuals have great affection for the pageantry of Halloween, not to mention for the sort of “sexual play” to which Halloween naturally seems to lend itself.

In sum, and at the risk of scandalizing some of my Evangelical acquaintances, I “approve” of Halloween, at least as I used to know it. I like the pagan elements of it; I enjoy its atmosphere of harvest rites and the way it passes down to us ancient rural practices in a dim form. I suppose that’s what makes me a cultural conservative—I like that the old ways should, in some sense, live on.

I should say, too, that the Russian Orthodoxy to which I’ve converted is a faith that’s comfortable with the old pagan influences that one can still find in it, from its canon of saints many of whom were pagan deities in the pre-Christian lands of Rus to the feast of Ivan Kupala, the ancient summer solstice celebration that was assimilated into, and repurposed by, the Russian Church.

There is wisdom in Russian Orthodoxy’s tolerance of this cultural continuity over the eons; just as there is something dry and inhuman in the purifying anti-Halloween zeal, really the intolerance, of the Evangelicals.