How the Dwarfs Got Their Names 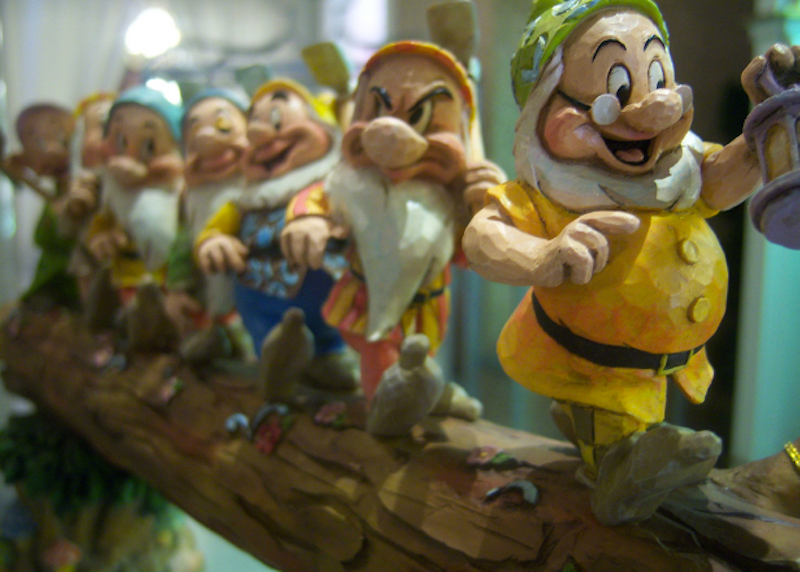 There once was a princess named Snow White. Snow White was a pouty bitch who was desperate for a fuck, so she went into the woods to try and find some luck. She’d almost given up until she saw some chimney smoke. She followed it to a cottage, where she thought she’d have a poke.

She flopped onto the couch. She'd just removed her pants, when seven dwarfs came marching in with a merry song and dance. Snow White stood there speechless. She thought she was in heaven. She originally wanted one good shag, but now she could have seven!

Straight away she took command. “My ass needs a lick!” When one dwarf came forward, she said, “You’d better drop your pick.” Down he went, onto all fours, before asking, “How do I lick that?” Snow White replied, “Dopy, just pretend your tongue is a baseball bat!”

The next dwarf started blushing. “Mrs.? Do we have to do it right here?” She answered with hot fury, “Don’t be bashful, unless you’re secretly queer?” Eagerly, he whipped it out to prove he was no fool. Snow White gave a big “High hoe!” as she wildly rode his tool.

Now one dwarf wasn't smiling because he hadn't had a sniff. Due to his impatience, he couldn't raise a stiff. “Relax, you grumpy bastard.” Snow White said, and he did as he was told. As soon as he was hard enough he shot a gigantic load.

The next dwarf got a blowjob and she took him quite easily, but he sneezed while he came so she called him Sneezy. With three dwarfs left, she pointed to one and said, “You next! I want your hairy knob!" But no sooner had he entered her, he fell asleep on the job. “Wake up!” she yelled. She wanted more from him. He awoke with such excitement, the orgasm left him slim. The next dwarf rammed his dick up her ass so well it was red raw. Aghast, she pondered, “Maybe that should be against the law!” He made poor Snow White tremble; he was so big and thick. She was star struck when she said, “No wonder you’re happy, you have a giant dick.”

With one dwarf still remaining, and feeling a little sore, she said, “You'll have to use your tongue; my hole can't take it anymore.” He put his tongue to work, where she just had so much cock. Because he made her all better, she decided to name him Doc.

Snow White was happy but she couldn't do much with a flooded quim, so she squatted over a cup, smiled, and filled it to the brim. And so ends the story of how the dwarfs got their names, by satisfying Snow White playing her fun little games.

There’s one more mystery we have to solve. What happened to the cup? Well, think of what you’re drinking the next time you gulp 7 Up.​