When firemen relied on watchtowers and lookout men. 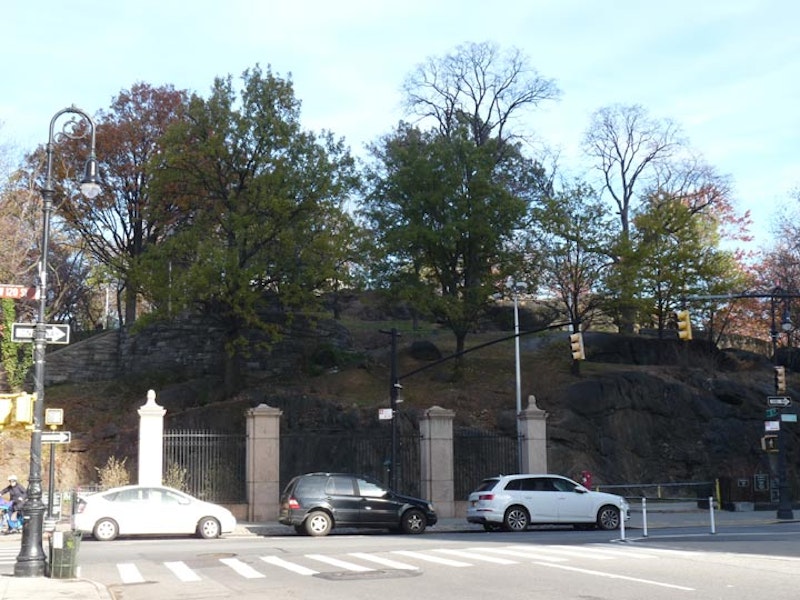 Since 1973, Mount Morris Park, located along Madison Ave. between E. 120th and E. 123rd Sts. (it interrupts the northern progress of 5th Ave. for four blocks) has been known as Marcus Garvey Park. The roadway that forms its western boundary is still called Mount Morris Park West, however, as is the immediate surrounding area in Harlem. Native Jamaican Marcus Garvey (1887-1940) was a charismatic community leader in the early-20th century who was a promoter of African-American self-sufficiency; his goal was to found an independent country for African Americans in West Africa. He was found guilty of mail fraud, was deported to Jamaica in 1927 and died in exile. He remains a revered figure, however, for his founding of the UNIA in 1914 and as a promoter of social, economic and political freedom.

Long before the street grid marched north, followed by brownstones, streetcars and eventually, elevated trains and subways, land here was set aside for a park. Land for Mount Morris Park was dedicated by the city as early as 1839 when the hill was thought to be too high to level, as many other shorter hills had been as the city’s northern limit marched up Manhattan and the street grid was established. The promontory was known by the Dutch in the colonial days as “Snake Hill” for its native reptile population. The last remnants of “Snake Hill” east of the park, a huge rock outcropping on Park Ave. between E. 122-123rd Sts., were demolished in 1911.

The name Morris turns up frequently in northern Manhattan and the Bronx. Though several Bronx locales are named for the prominent Morris political dynasty, the origin of the name Mount Morris Park has apparently been a puzzler for historians. A Robert H. Morris was NYC mayor from 1841-1844, but the park had been established by then. Sanna Feirstein, in the book Naming New York, guesses that the park’s high elevation gave a good view of the Morris holdings across the Harlem River to the northeast. 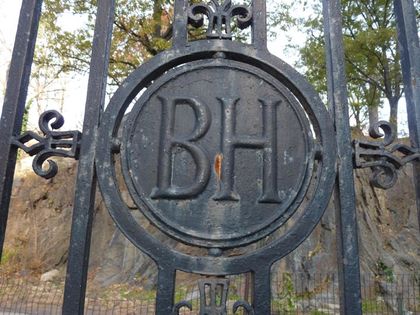 Though one may expect the front gates at 5th Ave. and 120th St. to bear the initials “MM” or “MMP” they instead feature the initials BH, creating a mystery. However, the reason for them is simple. The gates originally surrounded a portion of Bellevue Hospital downtown on 1st Ave. in Kips Bay, and were removed during a renovation in the 1950s; they were subsequently installed here, BH and all. 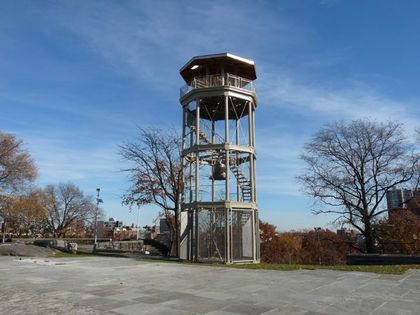 Before electric lights, radio or fire alarms, when a fire broke out, you had to make a lot of noise to alert the local population. Blazes were fought by volunteer fire departments, which were poorly coordinated and organized, until 1865, when the New York state legislature replaced the volunteer companies with the Metropolitan Fire Department. (The Fire Department of New York would succeed it in 1870.)

Until the fire companies acquired a telegraphic alert network in 1874, they relied on watchmen in lookout towers that were built on hills in Manhattan. The Mt. Morris fire tower is the last of its kind in NYC and the last one remaining in the USA.

Many of these towers were made of wood, and didn’t stand up to the elements over the years. This one, built by Julius Kroehl in 1856, is made of cast iron while the design is based on earlier towers by James Bogardus, who had built earlier such towers on 33rd St. near 9th Ave. and Spring St. near MacDougal that disappeared decades ago.

How did the fire towers work? When a blaze was spotted, the watchman would ring the bell, with different pealings indicating different neighborhoods. He’d also use signal flags during the day to alert a nearby fire company. The invention of the telegraph by Samuel Morse was the first step in modern fire alerting. 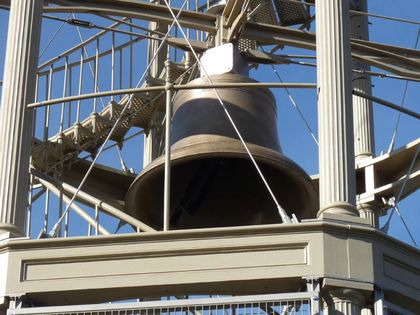 The tower’s five-ton bell was cast by founders E.A. and G.R. Meneeley of West Troy, N.Y in 1865, replacing the original 1855 bell. According to EastHarlem.com, the Mt. Morris bell continued to sound even after more modern fire alarms were installed: at noon and at nine p.m. weekdays and nine a.m. and nine p.m. on Sundays for timekeeping and church purposes until about 1909.

Unfortunately, the ancient fire tower became unstable and was disassembled and placed in storage in 2015. The funds were scraped up to restore it and put it back in place in late 2019. However, the staircase and bell are still inaccessible to the public, likely due to expected hooliganism if they were.