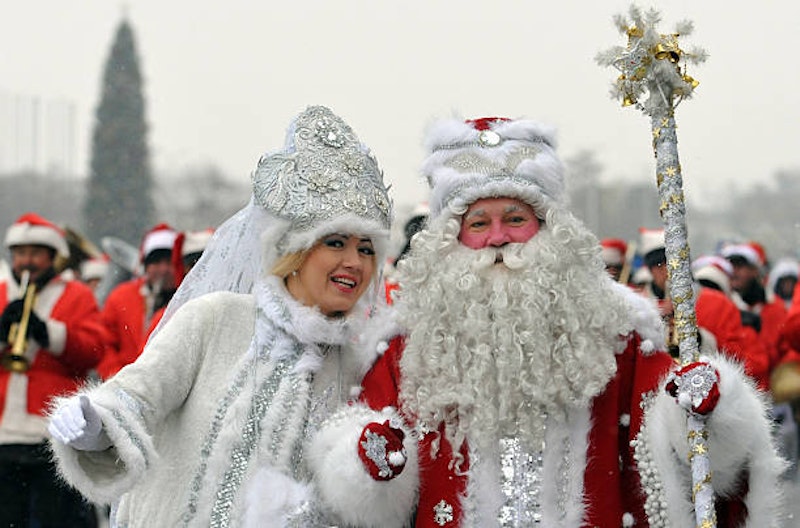 I’ve lived in America for over 20 years now. I got over the “culture shock” fairly quickly since I had to adapt and assimilate in order to survive and have a chance at success. At the beginning, everything about America seemed absurd. At this point though, most of it has ceased to be foreign, alien, and tinged with “otherness.” But there is one thing, which continuously eludes my full grasp of the American culture—Santa Claus. Maybe I’m making it far more complicated than it needs to be, and at the core of this elusiveness is nothing more than my own Slavic propensity for the macabre rather than the jolly fantasy of Santa.

In my native Bosnia, I didn’t grow up with the notion of Santa Claus or that he lives in the North Pole, and that he makes a list of who has been naughty and nice. Maybe other Bosnian kids did, but even as a child I was too much of a realist, who always pointed out to other kids that there was no such thing as magic. Inevitably, they’d always cry because I burst that comfortable bubble.  I didn’t have many friends.

As children, we visited a similar figure to Santa Claus, but we called him Grandfather Frost. I suppose it’s the closest you can get to Father Christmas but there was nothing remotely Christmas-y or religious about Grandfather Frost. The myth comes from Russia and it’s pagan in nature. He still delivers presents but there’s hardly anything spiritual about it. If anything, it was most likely connected to the cyclical form of nature, winter solstice, and general passage of time and seasons.

As Communism spread in Russia, it was easier to believe in Grandfather Frost than Santa Claus, who had inconveniently religious ties to Saint Nicholas. Bosnia, or I should say, Yugoslavia may have cut off the ties with Stalin, but it still forbade any practice of religion. And so, Grandfather Frost decided to make a visit once a year to our regions as well. A visit with Grandfather Frost was a way to usher in a New Year, which was a holiday every man, woman, and child could relate to.

A day with Grandfather Frost was filled with winter festivities. The children would see a play, which was usually related to winter celebration, and afterwards, have a visit with Grandfather Frost. The difference between the American version and the Bosnian version is that we actually received presents when we spoke with him. Take that Santa!

I don’t know whether the kids thought that the gifts truly came from Grandfather Frost but I do know that they came in a festive bag that was put together by an employee of the company my father was working at. And it was either paid by my father or taken out of his paycheck, or miraculously, it was paid with the company’s funds.

Perhaps keeping with the Socialist notion of equality and sameness, the gifts were not geared toward an individual child. Rather, the gift bag was a hodgepodge of stuff—candy, balloons, pens, pads, coloring books, model cars, a book or two—basically, what any kid might like. Strangely enough, I never minded that the gift was not specified toward me. It was fun to discover what was in the gift bag and to choose what I wanted to play with. I was always happy to see pencils and notebooks—those brought immense pleasure and still do.

Each year was a surprise as to what kind of Grandfather Frost I’d encounter. They were not “jolly,” and there was no “ho-ho-ho-ing” either. One year, he was cranky, another he barely said a word, another he didn’t even bother to look into camera as they were taking a picture for my photo album. It must’ve been 1983 or 1984. I was wearing my long blue winter coat with a fake fur hoodie, and wasn’t happy that Grandfather Frost’s gaze was on the long line of other kids and not me. In the photo, I looked like I’m oscillating between being slightly miffed and ready to murder this phony gift-giver. Can you really blame me for my Slavic darkness when you’re confronted with what is clearly the death of children’s imagination and innocence?

There was one year that remains in my memory as a good experience of Grandfather Frost. He was dressed up in what looked more like red and white rags than a real outfit. His beard looked like it was made out of cotton balls that were glued together by a bunch of pre-schoolers. The clothes just sort of hung on him as if he was a stand-in for a much bigger and burly man who got sick with flu and had to stay at home.

This Grandfather Frost was soft-spoken and yet he really listened carefully and intently. He took the time to take the picture. He was kind. I guess it’s very fortunate that this was my experience because this was the last time I visited Grandfather Frost.  I was too old anyway—seven—and according to the company policy, only children under the age of seven were allowed to receive gifts. Somehow, my father managed to sneak me in.

I don’t know how I feel about the American version of Santa Claus. I’m glad that children can live briefly in the comfort that they’re not alone and that there’s someone listening. But maybe it’s cruel to lie to them. After all, the presents are bought by the parents. Or maybe it does represent the beginning of the human battle between faith and doubt, idealism and cynicism, hope and fear. And that’s most certainly not a lie.