Dispense with realism right away. 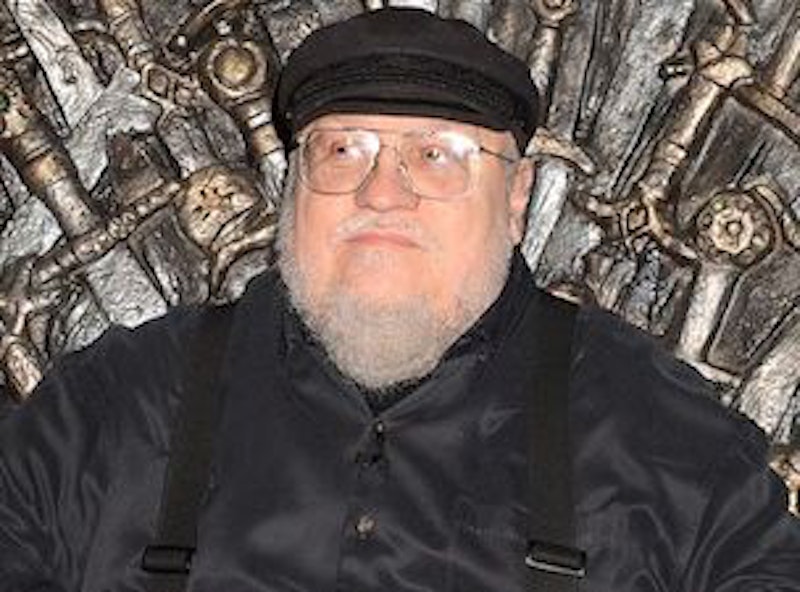 Realism’s frequently invoked in the praise given to George R.R. Martin’s ongoing epic A Song of Ice and Fire—often called A Game of Thrones, after the title both of the first novel in the five-books-and-counting series and of its TV adaptation. Supposedly, the story’s realism sets it apart from other fantasy narratives. In fact, it’s not especially realistic at all. That’s what makes it work.

Consider Martin’s latest book in the series, not a novel carrying his story forward but the first of two long histories of the land of Westeros, the continent where his story’s set. Blood & Fire and its yet-to-be published follow-up cover nearly 300 years of backstory in the form of a text supposedly written by a maester, a kind of Westeros academic. It shouldn’t work, for a number of reasons. But what much of what makes Martin’s novels succeed as a whole succeeds here as well.

Dispense with realism right away. Martin’s Westeros bears a passing resemblance to the European late Middle Ages, but that’s about all. It has more to do with popular myths about the medieval period. In Blood & Fire, for example, we read about the lord’s “right of the first night” with the brides of his land (something which never existed anywhere in Europe at any time); and we read about the “rule of thumb” by which a husband could beat his wife with an implement no thicker than his thumb (mentioned once or twice in English legal decisions in the 18thand 19thcenturies, it was nothing like an actual law and never spawned the phrase). These aren’t just minor inaccuracies, they’re testaments to ways of thinking that never existed in history.

There’s no reason they should, of course. Westeros has seasons that last for years. How does that work in the context of an agricultural society? The least you can say is that it’s going to be nothing like medieval Europe. Here as elsewhere, though, Martin chooses not to lean into the differences of his world, at least on the surface. Look a little deeper, though, and those differences are hard to miss.

The institution of the Maesters is particularly useful for Blood & Fire. Unlike a medieval writer, Archmaester Gyldayn avoids reading history theologically; the gods aren’t mentioned much. That’s perfectly in keeping with the Maesters we’ve seen in the series, but unlike the theological perspective of the past.

Martin instead gives us a history like a 19th-century historian might’ve written, discussing sources and acknowledging when things are unknowable, but fundamentally a history about characters and personalities, not historical trends or economies. It’s a history with a mass of stories in it, and if some of them lack endings or leave loose ends, that furthers what Martin really does well: not realism, but verisimilitude. The sense of the story’s internal reality.

This isn’t a book about the invention of new agricultural technologies or the development of banking systems—the world on the whole doesn’t develop in any way over the course of almost 140 years. This is a collection of tales and anecdotes set one after the other in a coherent order. You can follow the overall narrative of armies clashing with armies, but for me the book lives in its individual moments, its stories of characters embedded in the larger context of Westeros.

During a civil war called the Dance of Dragons, for example, Martin takes a few pages to write about attempts to find riders for wild dragons. Which leads into the discussions of the dragons’ characters. And of the characters of the riders who eventually tame them. And so into the stories of where those riders came from. It’s not necessarily the tightest way to get the information across, but it’s probably the most vivid, and energetic despite the discursiveness.

Which is something that might be said about the series as a whole. It sprawls, but it has energy, prompted by a kind of constant narrative invention. Vivid characters, not necessarily complex but certainly memorable, emerge from Martin’s writing. He has a knack for memorable names, not only high-fantasy coinages like “Valyria” or “Maegor,” but titles: the Vulture King, the mistress of whispers, the Black Brides. The names fit what they describe with a weird power—and frequently there’s a tension between the mythic echo of the name and the earthiness of Martin’s storytelling, a tension that provides another kind of energy.

Blood & Fire shouldn’t work. It should read like a role-playing game manual, hundreds of pages of the wars and politics of fictional kings in fictional places. Much of Martin’s usual tricks can’t be brought to bear here. Dragons aside, there’s very little magic, for example, and so few moments of awe to contrast with the frequent mutilations and rapes and bending of knees. (These are stories from long after the building of the Wall in the north, from after the Doom of Valyria. Well after magic, other than some dragons, has mostly left the world.)

Martin gets a lot of mileage in his novels from having characters providing different perspectives on people and history. People live different stories and have different understandings of the world, which is something that comes out through the use of third-person lead characters. Difficult to get that across in Blood & Fire, supposedly written by one character. Martin, to some extent, gets around that by having his historian discuss his sources, providing two or three descriptions of a given event. This creates the sense of a provisional history, emphasizing that the way something was written about is not necessarily the way it happened.

Martin’s style is as solid as ever, enchanted with the stories to be told. That’s the key: there’s always a story. The book’s an endless flow of incident and anecdote, of dialogue improbably recorded, of alternate versions and retellings, of people making their fortunes and losing them. The endless flow of narrative energy carries the book.

If Martin’s series as a whole is about power, and so frequently about masculinity and humiliation, the Maester makes an interesting contrast: someone dedicated to the life of the mind. Martin’s books are perhaps most unrealistic in the way that almost everyone involved in the quest for power seeks power for its own sake, not as a way to advance an ideology. Few even tell themselves that they have a higher purpose for their actions. Maester Gyldayn doesn’t pretend to see one in the history he describes: no pattern of heavenly justice here, only the squabbles of princes and dragons.

In a series that sometimes takes on an anti-intellectual slant (“words are wind,” we’re told again and again) and risks lionising might with no interest in right, Blood & Fire is a reminder of what lasts: history and storytelling. No power can overcome death in the end. All that remains are stories. And in this book there are stories within stories. Hints and asides that might bear fruit in the main volumes of A Song of Ice and Fire. Or that might not.