A message spelled out in candy raises more questions than answers. 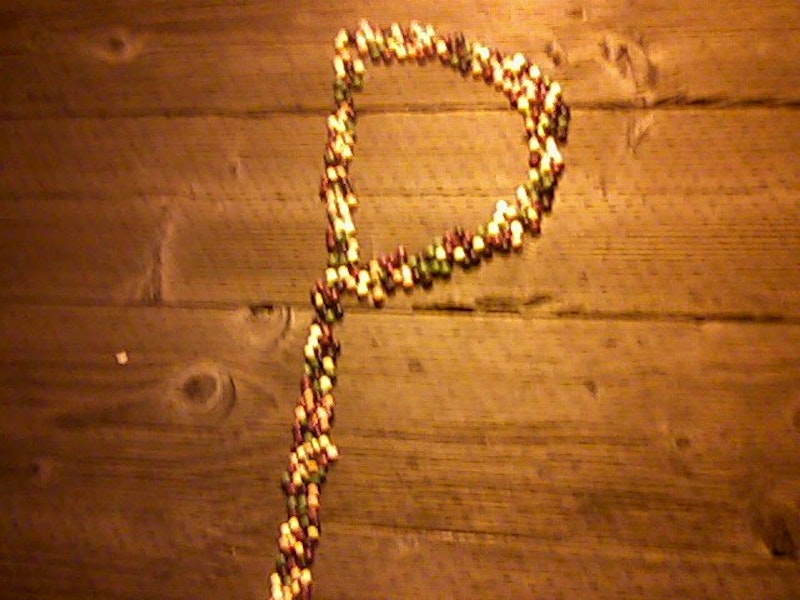 It was not a stormy night. The clouds had poured themselves out for what seemed like days and finally retreated from a good bit of the sky. But it was very dark. The moon was on the wane and the wind was whipping off the water something fierce. Blackberry bushes churned as I walked the length of the unlit gravel path. It led from Daphne's, the usual Sunday evening watering hole, eventually to the long ramp that comes up over the train tracks and down to the boardwalk on Bellingham Bay. The weekly routine is to walk the length of that boardwalk after Daphne's, to stretch my legs, feel the breeze off the ocean and get certain things straight in my head about the week to come. That night I chickened out. Nerves and imagination won. It's embarrassing to admit the thing that put the fear in me was about $7 worth of candy.

That sounds absurd. It is absurd! But let me explain my misgivings. The concrete ramp to the boardwalk is wide and is a destination in itself. There are a dozen benches spaced evenly in a line straight down the ramp. The benches have wooden platforms behind them where you can park wheelchairs and strollers. These are great places to sit to take in the panorama of the bay, especially when the sun is setting. During the days, and in the warmer months especially, the ramp and boardwalk get heavy foot, paw and bicycle traffic. Even at off-peak times, unless there is serious rain there is almost always somebody out there: a woman with her dog, a crabber trying his luck, a group of kids goofing off, young lovers strolling. But that night, nothing. I was the only one there just after 10. That made the discovery extra weird.

Something on the second wooden platform caught my eye and made me stop and investigate. The platform was covered with Skittles. They had been grouped together in a pattern, a question mark. The next platform down was naked, but the next one had more Skittles that spelled out a letter: M. The pattern repeated itself: nothing, then O; nothing, then R; nothing, then, finally P. Of course, MORP reversed is PROM?

How, you must wonder, could that possibly have set anyone on edge? Well it was eerily dark that night, and very windy, and deserted. Had I come upon this during the day, I'd have cracked a smile at some high schooler's puppyish attempt to ask a girl out to the big dance. Yet to see it there at that hour raised questions. If this had been done hours ago, why were the Skittles still neatly arranged? Shouldn't the heavy wind have scattered them by now? And if this was done recently, where was the young couple? Had it been arranged, but for some reason they never showed? Or was there perhaps another, not at all obvious reason for the letters?

Those questions got my creative juices flowing—never a good idea at that time of night. Stephen King's supernatural horror novel/flick Carrie came to mind, with its cruel prom prank and conflagrant comeuppance. So did another staple of the genre: the mysterious reoccurring message. You know how it goes: Every year or every month at a certain time, letters appear on a wall or mirror. These things signal that some disturbed spirit still has unfinished, deadly business here, though real ghosts would probably consider it gauche to use Skittles.

Superstitions were easy enough to cast aside, but there remained one other material possibility. The fact was, somebody had put the candy there, probably recently. What if I was wrong that I was alone? What if somebody was out there on the boardwalk, hidden in shadow, watching? The thought of it creeped me out enough that I knew a stroll was not going to happen, because it was ruined before it started. Things would lurk in every noise and shadow. Fight or flight reactions would replace any attempt to get some perspective. There's no harm in admitting that you might have called it an early night too.