The Brooklyn neighborhood was eliminated in stages. 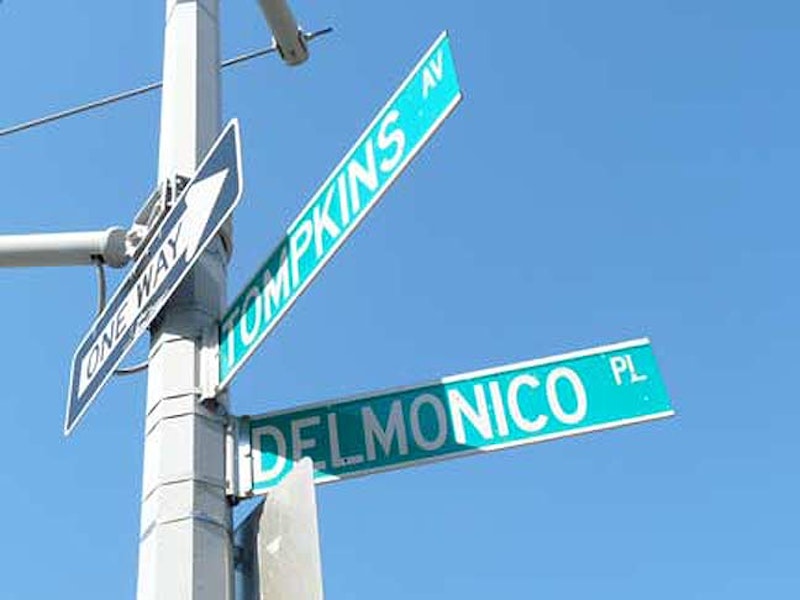 Sara Lee cakes were probably never served at Delmonico’s. Yet, the snack cake manufacturer and the fine dining establishment founded in 1827 by Swiss immigrant brothers John and Peter Delmonico are inextricably, but tenuously, linked by geography.

The Delmonico family that originally opened the restaurant got out of the business in 1923, but not before becoming a well-known establishment patronized by the glitterati of the time such as the Prince of Wales, “Swedish Nightingale” Jenny Lind, Mark Twain, Lillian Russell and her boyfriend, the gourmand “Diamond” Jim Brady, Charles Dickens, Oscar Wilde, and Nikola Tesla. Delmonico’s was so successful that as many as ten branches were in operation at one point. Prohibition cut down on the crowds, and the last Delmonico’s, on 5th Avenue and 44th Street, closed in 1923. Dishes such as Eggs Benedict and Chicken a la King were introduced at Delmonico’s, which also founded the practice of ordering from a menu.

Later incarnations of Delmonico’s not operated by the Swiss family have operated at 56 Beaver Street sporadically between 1927 and the present. 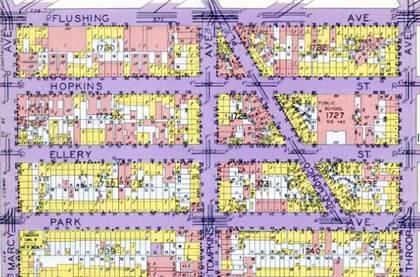 There’s a Delmonico Place in Bedford-Stuyvesant. turns up on official maps around 1900, but it likely existed before that. Originally it was a southeast extension of Harrison Avenue that ran three blocks, but with one lane to Harrison Avenue’s two. the street was marked “Delmonico Place” from the beginning. Some mid-century maps had it as Harrison Avenue, but that may have been a scheme that failed.

By 1929, as shown on the atlas plate above, little had changed for Delmonico Place. However, note the presence of Public School 140— it had a role in the diminution of the short street, making it even shorter. PS 140, later PS148, closed in 1985, with the building now educating special needs students. 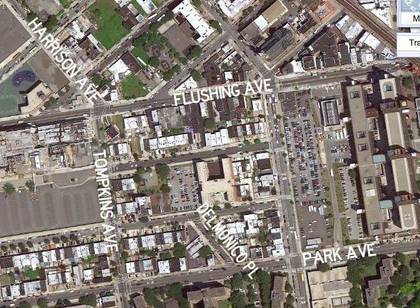 By 2011 shown on this aerial shot to which I have added street names, Delmonico Place is a remnant of its former self as two of its blocks have been demolished. Only the stretch between Ellery Street and Park Avenue remains. And, of the many buildings that formerly fronted on it, only one remains. 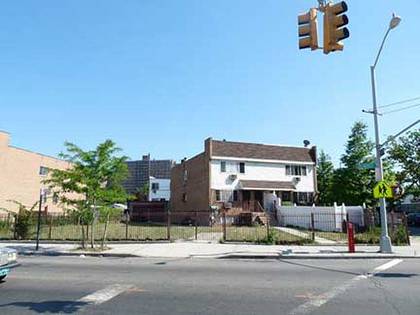 There are two explanations: The corner house actually has a Delmonico Place address, carried over from previous decades when the street actually ran here, or:

The DOT uses hopelessly outdated records and maps, which I’d imagine is the actual reason. 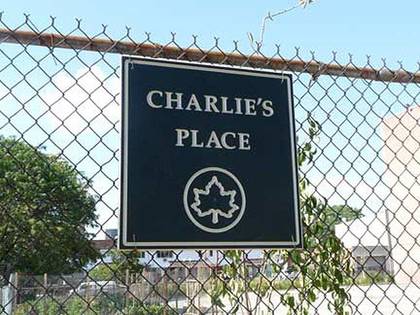 The path of Delmonico Place between Hopkins and Ellery Street is occupied by a concrete yard adjacent to PS 140 labeled Charlie’s Place. According to the Parks Department, the schoolyard opened in 1957, thereby eliminating the old stretch of Delmonico.

After the adjacent PS 148 closed in 1985 the yard remained empty for several years before it was reopened in 1992 as a play space for kids at the nearby Beginning with Children School (PS 333) which was partially funded by a benefactor named Sara Lee Schupf. 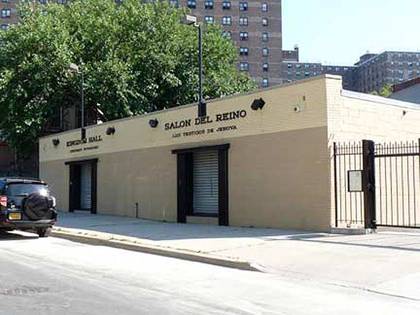 Finally, at Ellery Street you come upon an actual stretch of Delmonico Place–the only block still remaining, just north of the Tompkins Houses on Park Avenue.

Only one building remains of the former dozens — a Jehovah’s Witnesses Kingdom Hall. 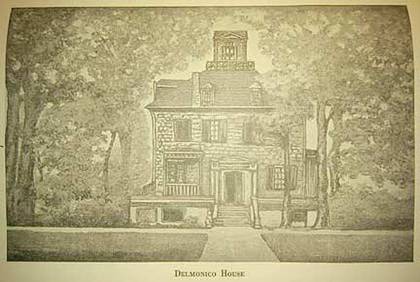 So, what is the connection between the grand restaurant chain and a one-block street way out in eastern Brooklyn?

In 1834 John and Peter Delmonico acquired a countryseat on the rural western end of Long Island. In largely open country they bought 220 acres of Kings County farmland for $16,000 and built an imposing Italian-style stone villa. Like many of their peers the brothers and their families had a taste for country living. Yet, they also had a practical reason to live way out here.

Delmonico’s in lower Manhattan was a roaring success, but local markets couldn’t provide the variety and quality of greens and vegetables required in classic French cuisine. 1830’s New York had no tomatoes, aubergines, artichokes, endive or asparagus. These crops could be introduced here and then shipped by boat across the bay to their Manhattan restaurant empire.

John Delmonico died in 1842 and his brother Peter retired to the country villa in the 1850’s when their nephew Lorenzo took over running the burgeoning restaurant empire in Manhattan. Williamsburg was absorbed into the city of Brooklyn in 1855 and the value of the Delmonico farm increased enormously. On Peter’s death in 1860 the 220 acres were divided among his children as building lots. The property now extended from Broadway on the north to Hart Street on the south, from Marcy Avenue on the west to Lewis Avenue on the east. No trace is left of the imposing Italian-style stone villa — only the small part of the driveway that connected the Delmonico estate to the Brooklyn-Newtown Road, which has since been renamed Flushing Avenue – though it ends up nowhere near Flushing.

But that’s for another Splice Today story.

Kevin Walsh is the Webmaster of the award-winning website Forgotten NY, and the author of the books Forgotten New York and also, with the Greater Astoria Historical Society, Forgotten Queens.