Finding The Lump in My Breast

And why I shouldn’t have been the one to do it. 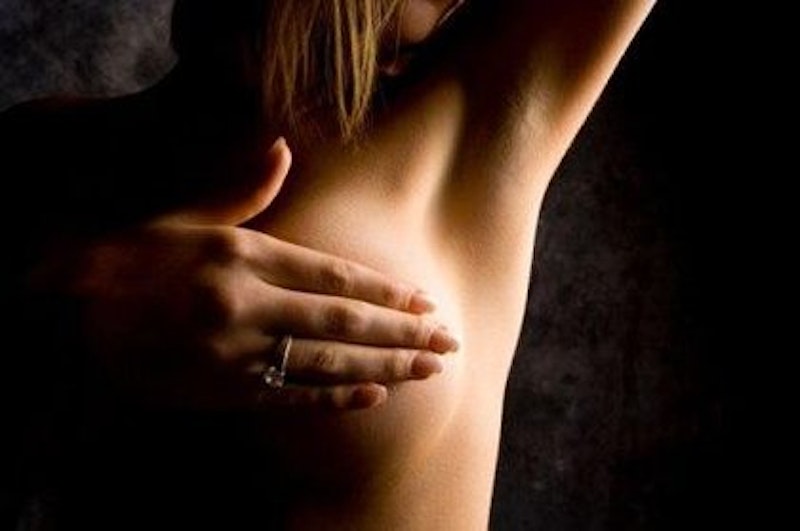 Last year, on a routine annual mammogram, a lump was discovered in my left breast. I got a call two days after the exam asking me to return to the radiology center for “additional views.” I didn’t really think anything of it. When I got there, they did an ultrasound, which I learned meant they’d seen something on the mammogram and wanted to take a closer look at it.

The radiologist informed me that there was a small lump in my left breast that would need to be biopsied by needle. Since it was small enough, they’d also remove the lump during that procedure.

For some reason, I continued not to worry. Despite my belief that I will probably die young of a stroke, I’m not generally a medical worrywart. No one in my family has ever had any kind of cancer (minus my grandmother’s skin cancer.) But I became more nervous when I arrived at the breast cancer clinic where the lump removal was going to take place. In the waiting room around me were women in various stages of breast cancer.

I flipped through magazines, thinking about how brave they were. Some had children with them, some were young, some were old, and all looked very courageous and strong and unafraid. Could this happen to me? When I was in the small procedure waiting area, the woman next to me was crying. I asked if she was okay. She said they’d found a lump in her breast and were removing it to test it for cancer; the same procedure I was having. I comforted her, made her laugh; best medicine and all. Was I supposed to be crying?

Two days later I got the call that my lump was benign. Life went on. Fast forward to a year later. Last week, I had another mammogram. Only this time something kind of bizarre happened.

The radiology technician did the standard “smash your boobs into painful pancakes” deal. I winced, but didn’t complain. She then said I could get dressed and go ahead and leave when I was done. Cool. Outta there. But after she walked out the door, I noticed that my name and scans were still showing on the screen of her enormous hi-def TV-type computer monitor. The screen wasn’t facing away from where I got dressed, so needless to say I walked over for a look.

I saw a good-sized white orb in what was labeled my left breast. Now, I’m no radiologist, but the left and right views (two each) were next to each other, so four pictures were arranged in a square. When I first saw the orb, I thought, oh well what do I know, it’s probably what a nipple looks like on a mammogram or something. But then I compared it to the right breast and yeah, no, it wasn’t a nipple.

I was sure it was a lump.

I didn’t say anything to anyone. I wasn’t going to go running down the hall and demand that a radiologist come and explain. Also, I was kind of in shock, and in the back of my mind, was also trying to convince myself that I didn’t know what the hell I was looking at. So I just went home and waited for two days until the call came. During the two days, it occurred to me that this whole scenario was kind of bullshit. I am pretty sure this situation is not what the medical community means when they talk about “breast cancer awareness.” I mean, if I was a woman with a history of breast cancer, or a woman who lost a sister or mother or best friend to breast cancer, I would be a complete fucking wreck waiting for that phone call.

I got the call the other day that I needed to return for “additional views.” I asked the woman on the phone whether “additional views” meant that they’d found a lump in my left breast and were bringing me in for an ultrasound to measure it before scheduling me for a needle biopsy. She asked me how I knew that. Now, I wasn’t going to rant to this administrative medical tech about how I knew I had a lump in my breast because unfortunately I’d been able to see it with my own damn eyes right after my mammogram.

The ultrasound is next week.