The Timid Teacher and the Speech He Didn't Give

Language is a mug's game and I'm almost willing to say so. 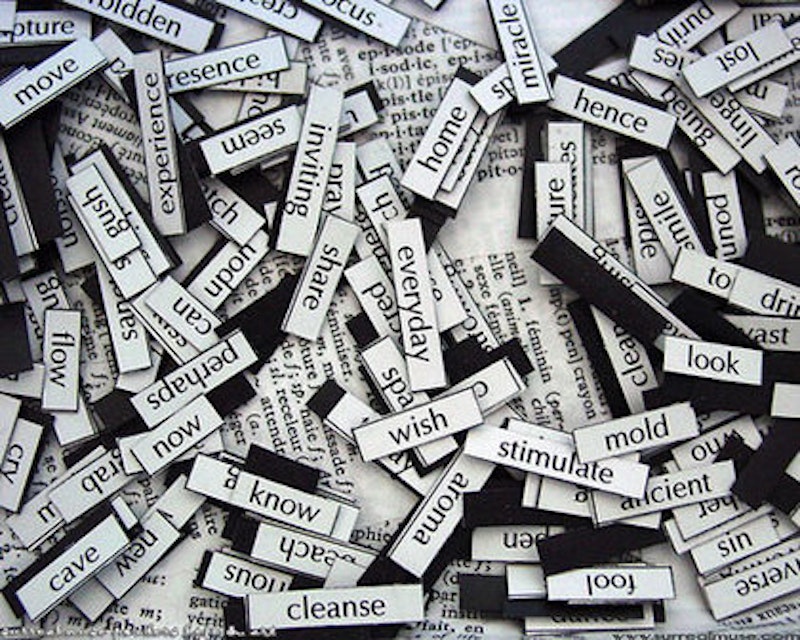 It really bothers me that I have to use words to communicate. People should understand what's in my head without this processing, the factory work by breath and jaw, the sticking of meanings onto selected sounds. Just to get by I have to play by other people's rules. Because I didn't choose any of these sounds. Every word I speak is somebody else's idea. Whenever I choose a sound on my own and give it a meaning, nobody knows what I'm talking about. So here I am, stuck playing by their rules.

Language, what a system. What a requirement to put on people. Load your little coconuts into those bobbing dinghies, each of them smaller than whatever they have to hold. The dinghies tip over or knock each other aside or float out of line, over and over. The coconuts spill into the waves; try to get them out, and like as not your fingers will bump them even further underwater.  Rescue them and get the dinghies into a line, and you'll find that you did so by using a phrase like “like as not.”

There's no way to win, and we're all stuck in this same fumbling game, dreaming vaguely of when the dinghies will somehow be bigger or the coconuts will have handles or someone will have replaced the water with a pool table, something level that you can work with. Meanwhile, six or seven or eight decades go by, and you die. Congratulations, you have just had your experience with language. Did it work out?

All right, so I admit this problem isn't mine alone. Why the chip on my shoulder? Because here's how language was presented to me: “This works. Learn it.” Nobody ever said, “We’re stuck in this together. The system doesn't work, it just persists.” They might have gone on, in a more high-flown, whimsical fashion, to say, “It's a couch that nobody's comfortable on, a golf course where the putting heads are too small for the ball. You will never be quite yourself when you count on words to convey your meaning, and there will be no day ever in your life where you don't use words and watch them fail you again. We just have to live by this involved arrangement under which everybody's head is a cottage operation for producing sound-idea combinations that can be registered in other people's heads and there set aside for possible consideration after the receptor head slows down its own sound-idea combo production. This is communication, and we are doomed to think it works and that its failures are all by the way, products of somebody else's misfiring brain. We are doomed to think this, because otherwise we would scratch out our eyes.”

Here's what I could tell my students in the TESOL class. You sound like an idiot because you can't talk, but you never said talking was your idea. It wasn't. It was the product of the ideas of so many different people that we have to lay it all to “them,” the mass of humankind all together, those faces and ears that surround you from birth and spread around the world, the human animal with its insufferable weight of received opinion.

Now you stand in a foreign classroom and discover that this idea of talking has its limits, severe limits. You did your part: signed up your jaw, pushed the air through your vents. But now you arrive in a room where I know how to talk and you don't. Your deal has turned out bankrupt. Talking has left you when it said it would stay. You have to scramble for new terms, learn the arbitrary, complicated dullness that makes up the idea-sound system in this distant part of the globe.

You may not realize that I am permanently not part of “them” and that everybody else is. But this has been the key fact of my personal cosmology since I was old enough to lift my head. Followed, a medium time later, by the idea that I should not hold a grudge about this state of things, though “they” always had the upper hand and I rattled about on the margin of existence. I'm really better off if I don't hold a grudge, that's all. I don't hold a grudge.

Now here you are, exiled from your kind, one of “them” dropped in front of me without your “them” equipment. But I'm a child too, always was and in all situations, and now I can welcome you to this state and help you through it. I'll take you on your way to verbal competence with the understanding that we're both schmucks trying to dodge our way through the rules. But once you make it, you'll be one of “them” again and I never will, so I'll add this as we talk: We really are both schmucks, I wasn't kidding, and like me you're stuck in a permanently collapsing system that ends with death. This is existence, trying to work a system that doesn't work, goodbye.