Fred Kaplan's 1959: The Year Everything Changed isn't perfect, but it may incite nostalgia. 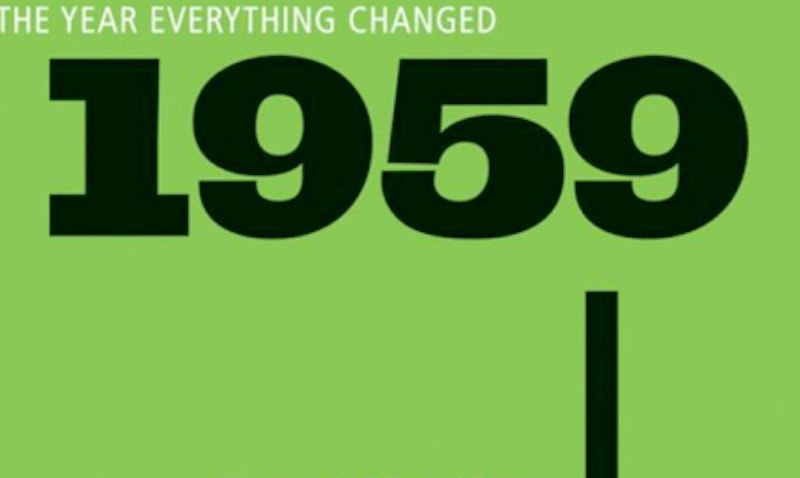 There's no chance that I'd be consulted, even as a courtesy to a parent who forks over a hefty tuition bill, about the curriculum for my son's ninth grade history class this fall, but given the opportunity I'd recommend Fred Kaplan's new book 1959: The Year Everything Changed. Aside from Kaplan's predictable comparison of JFK and Barack Obama (and the ludicrous premise that the last year of that decade was the one "[W]hen the world as we now know it began to take form," just a hook for him to differentiate his work from hundreds of similar studies), 1959 is a fine primer for 15-year-olds about post-war America and the lead-up to the turbulent 1960s. This isn't a strong recommendation for anyone who has even rudimentary knowledge of key figures like Medgar Evers, Castro, Che, Jackson Pollock, Lenny Bruce, Norman Mailer, Miles Davis, Ike, Khrushchev, Allen Ginsberg or Jack Kerouac, to name just a few, but for curious teenagers 1959 functions as a textbook and is far superior to some of the absolute garbage that's assigned at both private and public schools today.

The uninitiated may not know, for example, that William Burroughs shot and killed his wife in a drunken game gone wrong, and the book reminded me that the San Francisco Chronicle's Herb Caen, at the height of his celebrity in that city, was credited with coining the term "beatnik." It's not a bad book at all, even for those who are familiar with the well-documented material and, if you're fond of relaxing with a history book while on vacation, as I was recently, you could do worse. Douglas Brinkley, the historian who churns out purportedly serious books at a promiscuous rate, comes to mind, but no matter.

Kaplan's 1959 is weightless enough that I'd consigned it to a heap of books on my office floor, probably never to be opened again unless one of the kids happened upon it, but over the weekend my son bought a bottle of lemonade with a retro cap that looked like the kind from my youth-not a twist-off but one requiring a church key to open it, as if it preceded the invention of flip-tops. I'm taking a circuitous path here, but all of this reminded me of the man who was my teacher for the fifth and sixth grades in Huntington, New York.

Howard Wachtel (name changed to protect his identity), who was probably about 35 at the time (1966-67), was not a typical public school teacher, for better and worse. Yet the fact that I even remember his name is testament enough that he wasn't one of those dull, suburban clock-watchers who led most of my classes. Mr. Wachtel was a bear of a man, overweight with a Mitch Miller-like goatee, and wore a black suit and black tie every day, sort of like an undertaker. Each morning he had a quart of milk on his desk, the cure-all for an ulcer condition. On occasion, he'd send one of the boys down to the cafeteria for a pint if he needed reinforcement. Academically, Mr. Wachtel wasn't particularly gifted; he was able enough at what was then called the "new math," science, English and history, but if any of his students were so inspired by him that the course of their lives were altered dramatically, I'd be very surprised.

What separated Mr. Wachtel from the rest of the pack was his personality, which might be charming one day, but then vicious the next. Today, I'm betting he'd be popping anti-depressants instead of gulping milk, but in any case he stood out. For example, in November of 1966, the day after the midterm elections, the class settled in at 8:30 and Mr. Wachtel gravely announced that, "This is a very bad day for the United States. An actor will be governor of California!" On that day in '66, he was in a very foul mood and so distressed that he allowed the 30 or so students to read or talk quietly until after lunch, when, ostensibly, he was better able to cope.

On the other hand, when payday hit every other Friday, he'd often surprise the students with bags of gum drops, chocolate-covered peanuts and raisins, jelly beans and Tootsie Rolls, distributed evenly on each desk when we'd come back from afternoon recess, about an hour before the 3:00 bell rang. And sometimes he'd talk about the Holocaust, not in an especially bitter way, but explaining how, as a Jew, his extended family had suffered, and, as this was on Long Island, he'd solicit stories from the many students who were also Jewish. And on one occasion that I remember, Mr. Wachtel was quite compassionate: the boys were in gym class and Benjie, one of the few black kids under his charge, forgot the combination to his locker and was quietly crying as he fiddled with it, naked after taking a shower. Someone had the presence of mind to call Mr. Wachtel and he soon appeared, chastised the fools who were giving Benjie the business, and restored order, along with a dressing down of the guilty parties.

Turning to his twisted side, Mr. Wachtel was also an armchair shrink. One time he suspended a discussion of Christopher Columbus and embarked upon an ill-fated exercise called "Good and Welfare." The object was for students to open up and discuss what they liked or disliked about their peers. Needless to say, those who weren't exactly circumspect unloaded their grievances and friendships were ruptured. Ironically, Mr. Wachtel was the biggest loser of the day, when, after a blunt girl asked him why his dandruff was so acute, he abruptly ended the ill-conceived "game," and was grumpy for the rest of the week.

Personally, I got along fine with Mr. Wachtel, and got a kick out of his many idiosyncrasies. It helped that I received good grades and that he knew the family, since one of my brothers was in his class five years earlier. But in the spring of '67, I was the victim of his-perhaps inadvertent-cruelty. The class was set to stage West Side Story for general assembly, and Mr. Wachtel decided I was perfect to sing-sing!-"Maria" and "Tonight, Tonight," pairing me with a really nice girl named Kate Baum. This seemed odd (and horribly embarrassing) since I've got an awful voice and wasn't keen to demonstrate that fact in front of my friends, let alone the whole school. I begged off, but Mr. Wachtel persisted, enlisting the rest of the kids, who were only too happy to egg him on. I refused, the part went to Bruce Humm, a terrific guy, and Mr. Wachtel made fun of me for two straight weeks. I'm sure he forgot about the incident shortly after.

As it happened, I ran into Mr. Wachtel a few years later at the local A&P, and he was garrulous, full of cheer and we chatted for 10 minutes or so about current events. It was a lot of fun, and though the "Maria" fiasco was in the back of my mind, it didn't seem so important. Flip-tops, paisley shirts, 1959, Paul McCartney causing a stir by admitting he'd taken LSD, and of course the 40th anniversary of Woodstock; all of this, I suppose, led me to this short reverie of an unusual man from my childhood, a tormented person who probably would've been happier had he stuck with the bongos and poetry readings rather than acquiescing to the safety of a career as a grade school teacher.