Every Briefcase Tells a Story

A well-worn accessory drifts into nostalgia. 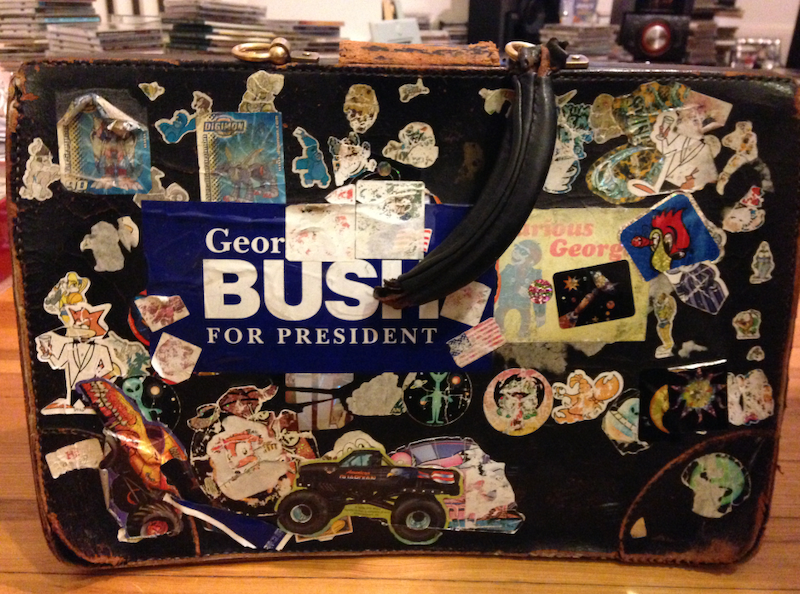 It was a moment of private despair a week ago when, about to enter a cab on a drizzly afternoon, my briefcase fell into a puddle and the handle broke. I fumbled with an umbrella, cell phone and damaged case, and was ticked off at this turn of events. I don’t have many possessions that are truly favored—a Baume & Mercier watch, framed family photos, a cotton yellow & black tie from Milan, a doctored draft card, two laminated City Paper covers from 1978, original drawings by Ben Katchor and Drew Friedman from my New York Press days—but this Asprey briefcase is in the mix. And now, with the busted strap, in addition to rips at the bottom of the bag, it’s history, consigned to my Packrat Museum. Maybe at some point in the future, one of my sons will dust it off, show it to their marginally interested kids, and that’s that.

This is a purely sentimental lament, although I’m certain that most people have similar feelings about various items they’ve kept, and treasured, for years, or decades, on end. In this case, the briefcase was a present from my wife Melissa on the occasion of my 40th birthday back in 1995, and it replaced a less durable number I purchased at Aquascutum in London eight years earlier. I don’t think it was even 48 hours after a grand party at our Tribeca loft on Hudson St. that the new briefcase was christened by my son Nicky with a stick-on decal of one of his Power Ranger friends. A more fussy father might object to such quick defacement, but I encouraged it; after all, the minor piece of luggage is just a means for carrying necessities for the workday—back then, it meant the day’s newspapers, now maybe a book, along with my wallet and sunglasses—so who cares if it’s festooned with kiddie stickers? It made the boys happy to put their mark on Dad’s “broofcase,” and that, in turn, delighted me.

Looking at the mottled and ripped briefcase now, it’s hard to make out all the ornamentation: most of it’s faded since the kids are now 21 and 19, and long ago stopped adding on. I see: two Digimon decals, Woody Woodpecker, four miniature American flags, Santa’s reindeer, Pokemon characters, countless Boston Red Sox stickers, a Furious George badge (from the band our family friend George Tabb played in), Arthur the Aardvark, stray picture-book animals, souped-up American Guardian trucks, a Christmas stamp, Smokey the Fire Engine and a dozen more artifacts that I can’t make out. Not that I didn’t play along, adding in 2000 a George Bush for President bumper sticker (did anyone really vote for Al Gore, or was that an urban legend?) and a few Sox decals of my own. There’s also a Baltimore Orioles stamp that was affixed years ago, a joke that I believe might’ve been the work of my longtime friend Alan Hirsch, probably as a mini-protest against his team’s utter hapless post-1997 seasons. I haven’t the foggiest how a Seattle Mariners logo joined the crowd, but nothing wrong with a little mystery. (Maybe it was a weird signal that one day Robinson Cano would sign with that lousy team.)

I’m not an inordinately shy man, but I haven’t the capacity or desire to jump into a room of strangers and trade small talk, so my increasingly decorated briefcase became a calling card over the years. For example, it came in very handy in the post 9/11 lava pit of airport security, during the routine of shedding your shoes, change, belt, coat, laptop, etc. to the robotic TSA officers. By and large, these workers are not a happy lot, but it’s a job that no doubt beats that of a tollbooth operator on a turnpike, if slightly more dangerous.

Anyway, in the past decade, I’ve been able to use the briefcase to my advantage when carrying illicit items on a return from abroad or in the States—small bottles of Caribbean hot sauce, toothpaste, maple syrup, skin cream and the like—for instead of chucking the forbidden wares, a typical TSA officer (almost always a matronly women) will gush over the case, showing the evidence of children, and take a minute to check it out, smile and issue a pleasantry, and then with a finger to lips, excuse the transgression. I’ve liked that. Besides, when your name is Smith, airport security can be tricky, a lesson I learned in Bermuda years ago, when, after clearing customs I was held in an office for almost an hour. Seems that a criminal was on the loose in Hamilton, and we shared the same name.

As noted above, this is the stuff of nostalgia, a minor predicament that doesn’t compare, say, to wrangling with a credit card company by phone when you’re trying—and trying—to straighten out a billing statement error and get shuffled from Bangalore to Mexico City and finally Omaha to get it all sorted out. But it’s a touch wistful just the same, for while I know what’ll be under the tree for Christmas, the time has passed when Precious I and Precious II will run around like Heckle and Jeckle and mess with Dad’s briefcase.