More people should stop trying to be an important voice of reason. 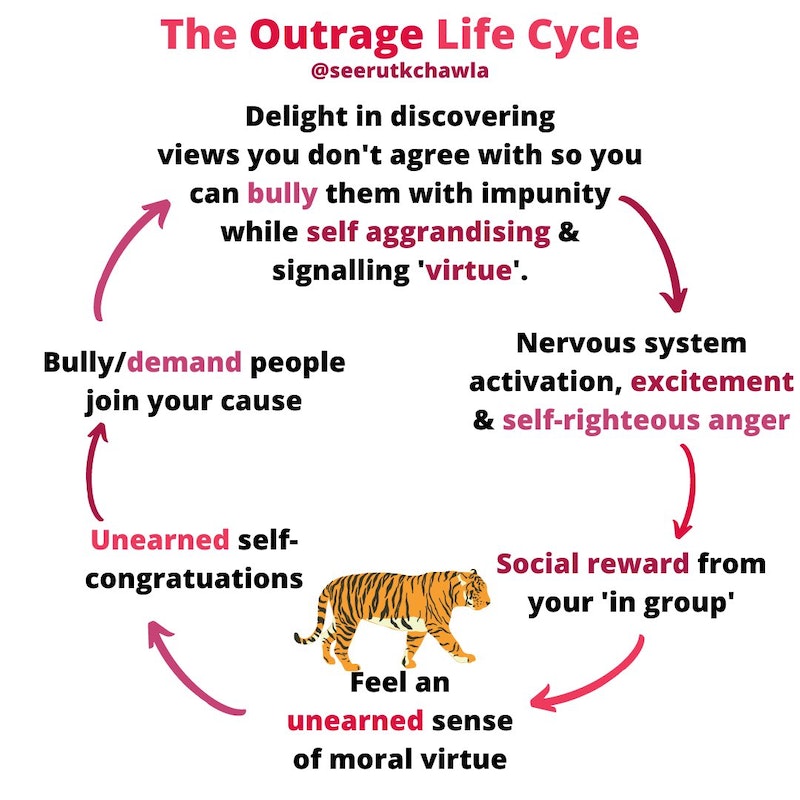 Meghan Daum recently announced her retirement from writing “think pieces” because, as she puts it, “after a quarter century of thinking on the page, I often literally don’t know what to think anymore.” She adds that coming up with something original every week is exhausting, especially when you can’t think of anything to say.

I know what she means. Prior to working at a grocery store, my livelihood depended on having a new opinion every week, hoping it’d be the one that got me a weekly column at a major publication. Some marveled at my bravery for saying things nobody else had the guts to say. Four years and several breakdowns later, though, I’m not a pundit.

Many on the left saw pundits as prophets after the 2016 election. The emperor was naked, but those who acknowledged it were deemed the enemy of the people. Meanwhile, the rift between the “woke” and the “anti-woke” grew wider; it started a few years prior with the debate over free speech on campus, but quickly escalated after Trump became president. America needed a voice of reason to remind everyone who the real enemy was, and I tried to one of those voices.

Writers are narcissistic. We believe our words have the power to change the world, and that the universe cares what we think. Only a handful of writers can honestly say their words meant something, though. The rest of us are just talking to the wind. It took me a while to realize that.

My writing career was somewhat successful at first. I started writing regularly at Splice Today, and occasionally wrote for HuffPost’s opinion section, Arc Digital, Rewire News, and INTO. Sometimes an article was very popular—people still share my HuffPost article about self-care from 2018 thanks to an influential Twitter progressive—but nothing major. I was still optimistic because success rarely happens overnight, but as the years passed, however, I wondered if I was in the wrong business. INTO shut down, Rewire News laid off all its full-time writers, and HuffPost closed their opinion section. Pundit culture itself wasn’t what I expected.

Eventually both the reader and the writer get tired of the same opinions, and that’s when apathy takes over. I was no exception; nearly half of my articles contain some variation of the phrases “Trump is dangerous for LGBTQ rights” and “We’ve made a lot of progress since Stonewall, but the fight isn’t over yet.” I got tired of my schtick.

Journalist Twitter is like high school. Cliques form and are pitted against each other. The slightest faux pas is an invitation to public ridicule and harassment. Most people think cancel culture is just a left-wing phenomenon, but even self-described centrists publicly humiliate ideological opponents on Twitter. I was sure I was their next target. Paranoia took over; with every published article came the anticipation of being declared that week’s example of everything wrong with the progressive left. The only way to prevent this was to wade deep into the discourse, cut through the propaganda, and find the real story.

Depending on the writer, the latest mass shooting is another example of either toxic white masculinity, declining Judeo-Christian values in America, or not enough good guys with guns. I’d spend full days reading every article and op-ed about the latest controversies—whether the BDS movement was inherently anti-Semitic, whether Antifa were the heroes or villains, whether there were limits to free speech—trying to discover truth.

The questions became unbearable by the time the 2020 primary elections started. Every newspaper pundit and TV news network talking head speculated who the Democrats would pick for the final nominee and whether it was enough to beat Trump. As I sat down to write on the primaries, I only came up with three words: “I don’t know.” I was okay with that. My muscles, which had been tense since the 2016 election, finally relaxed as I let go of all expectations of being an important voice of reason.