Tom Nichols is ashamed; my church accepts the Z. 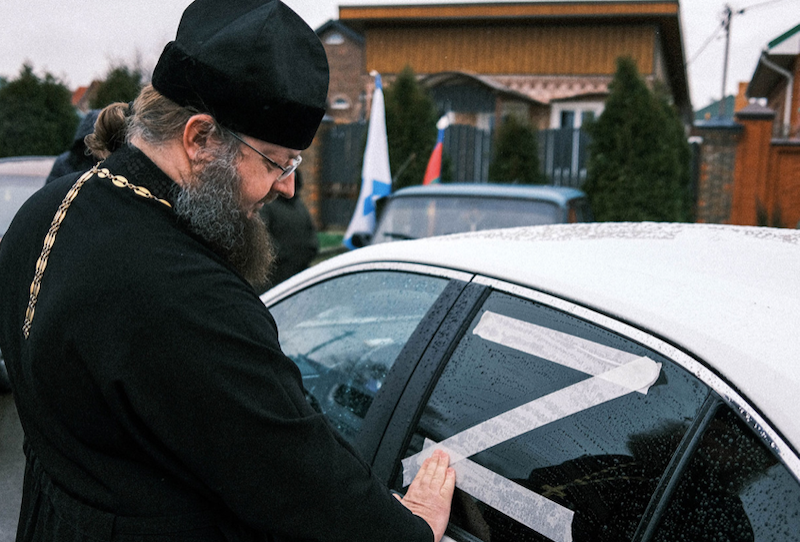 This has been the first time since my conversion to Orthodoxy almost 20 years ago that I’ve been less than completely enthusiastic about celebrating Easter. The Ukrainians’ war is leaching the joy out of this most profound of festivals. It’s hard to delight in springtime regeneration and contemplate the triumph of eternal life while Russia bleeds.

Yet I’m also aware that there’s a decadence about my malaise. We Christians, I think, pay too little attention to the meaning of Easter. Perhaps even in my own Russian Orthodox community Easter has become too much a secularized and even kitschy affair: a holiday of cardboard bunny rabbits, pastel-colored dresses for little girls and, in the chain drug stores, jumbo plastic bags stuffed with yellow marshmallow chicks and Cadbury eggs with that cream filling of theirs that imparts a slightly discomfiting “mouthfeel,” to borrow a phrase from the oenophiles.

We tend, in other words, to ignore the gory suffering that precedes resurrection: the penetration into the Khristos’ gut of the legionnaire’s spear, the hammering of the spikes through His palms, the dram of caustic vinegar that burns His lips so sweet, His slow expiration from blood loss and exposure, the Deposition of His mangled corpse. But this painful suffering is at the heart of Easter—the atrocity that preconditions the triumph of life.

Easter in wartime offers us a spiritually salubrious opportunity to meditate on that sin to expiate which Christ offered Himself in sacrifice. We’re compelled to confront our fallenness in its most terrible guise precisely in those spiritually perilous moments before the tide turns, before the darkness is vanquished and He is resurrected into light.

For this gift, strange as it feels to say it, we must thank the Ukrainians, who, like adders and cockroaches, are ultimately instruments of Heaven’s plan.

Neocon pundit Tom Nichols, a Russian Orthodox convert like I am, is ashamed of our church. I suspect that we’re going to see more of this sort of thing as the Ukrainians continue their aggression and Russia commits that irredeemable sin in the eyes of the Western chattering classes: wages an uncompromising defense of its borders, its people, its culture, its language, and its faith. Nichols, a dyed-in-the-wool member of our warmongering establishment—a professor at the U.S. Naval War College, no less—knows that a performative public denunciation of a church associated with the Russian state is necessary to his continued enjoyment of the blandishments of life in a certain pampered section of society. And so he leaps obediently through hoops.

Meanwhile, here in Indiana, far from the moral equivocations of the coasts, things are different. Vladimir Semyonovich, a Russian immigrant member of our parish who is remarkably skilled with a brush, has worked a subtle golden “Z” into the pattern at the top of the central door of our church’s iconostasis. Lyuba Stepanovna, another Russian immigrant with needleworking gifts, has woven a large “Z” into the chestpiece of Father Nicodemus’ sticharion. I’m not sure I love the effect—it makes our priest resemble a massive, bearish, bearded, ruddy, oft-cackling Russian superhero—but I can’t deny that Father has taken to the vestment, and when he “sports” it during mass on Sunday there’s an undeniable extra “spring in his step.”

A joyous Pascha to my coreligionists!

Christ is risen! Truly he is risen!