Did Someone Say Mermaid Ball?

What I observed attending the surreal mermania soiree. 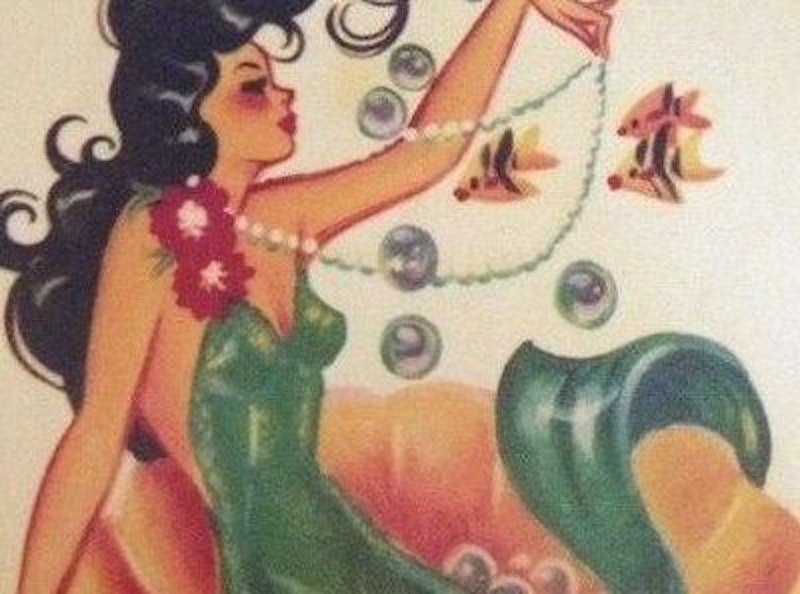 I went to my first mermaid ball in California last week at the Cayucos Sea Glass Festival. What a gorgeous waterfront town this is: a saloon, bakeries, charming hotels—the whole place looked like a movie set. I observed a few things about attending a mermaid ball, something that sounds like a Disneyworld event hosted by Ariel where she’s just going to have a few of her nautical friends over for some Under-the-Sea drinks and a hot crustacean band, and the well-executed, perfectly planned event complete with chowder tasting contest didn’t disappoint. In fact, I need more mermaid costume balls in my life.

It took me awhile to prepare for it. In addition to avoiding carbs in order to fit into a fin, I had to buy mermaid makeup, accessories (I had to have the golden clamshell purse), wig, and glittery mermaid-themed temporary tattoos—having a beautiful sparkly jellyfish all the way down one arm and a large starfish at the corner of one eye were cool details, even if one part of the eye tat stayed on for a few days making people think I had a prison face tat.

You can't walk or sit down in a fin. Or pee. When the band played “Gimme Three Steps” (not that I could take them) and it was time to dance, I learned that a very limited version of "the mermaid twist" was about all I'd be doing that night. Also, I’m not sure who started the “mermaid conga line” or what kept us all standing as we wormed our way around the room other than holding one another up and hoping our corsets didn’t fall off as we tripped over our fins in hysterics.

At a mermaid ball, you may or may not get semi-trapped inside the lifesaver ring of the Guy in the Titanic Costume who ended up winning the Merman contest. Hula-hooping seems like a good option when you can’t really move that much. Luckily lots of mermaids will gather around to make sure your entire wardrobe situation doesn’t fall apart in order to eventually pry you out of the life preserver.

The Cayucos mayor, a distinguished white-haired gentleman may offer to buy you a drink, offering to write a new town law since only beer and wine are offered at the event and he agrees with your suggestion that “Mermaidtinis” would raise lots of money for the event (which helps pay for the town’s July 4th fireworks). Mermaidtini law sounds fantastic. He does make good on the promise to buy the drink, at a cool restaurant called (what else?) Schooners. The next day, a Cayucos local tells you the town doesn’t even have a mayor, and that she as a school board member is “more elected than that guy will ever be.”

Also at Schooners there are actual cowboys in cowboy hats with shirts reading So-and-So “cattle ranch,” confirming your suspicion that everything in California is a Hollywood set.

Me, to cowboys: “Are you actual cowboys?”

Cowboys: “We work on a ranch with cattle.”

Me (suddenly worried that “cowboys” is a politically incorrect term, even in a town where I’m currently standing 100 yards from a “Saloon”): “So, that’s like cowboys, right?”

Cowboys: “Well, you’re standing here and you’re a mermaid, so this bar seems to have all kinds of people.”

The Mermaid Ball is a contest. Although I went to the West Coast knowing I was very much a not-fitting-in East Coast fake mermaid and was far too old to compete with the likes of far more lovely, tanned, surfer-type, pro-level, game-on mermaids, I went into it with the idea that it’d be a blast, and it was. People take mermaiding seriously—from hair and makeup to tails and accessories, it was go time at the oceanfront tent decked out with gorgeous handmade jellyfish swinging in the sea breeze. Seeing how creative people were with costumes (one woman was dressed as the dying ocean—complete with fish skeleton dress, beach plastic, and dramatic gothy makeup) was inspiring. I phoned the whole thing in with an Amazon order of my fin costume, but was already planning for next year.

The mermaid who won made her bustier out of shells and looked like she just wrapped things up at a Miss California qualifying round last week. But looking around at the group—drag queen mermaids, mermen, pirates—I wish the east coast, at one of our many sea glass festivals, would host a sister mermaid event so I can bring out the glitter body tattoos and do it all again.