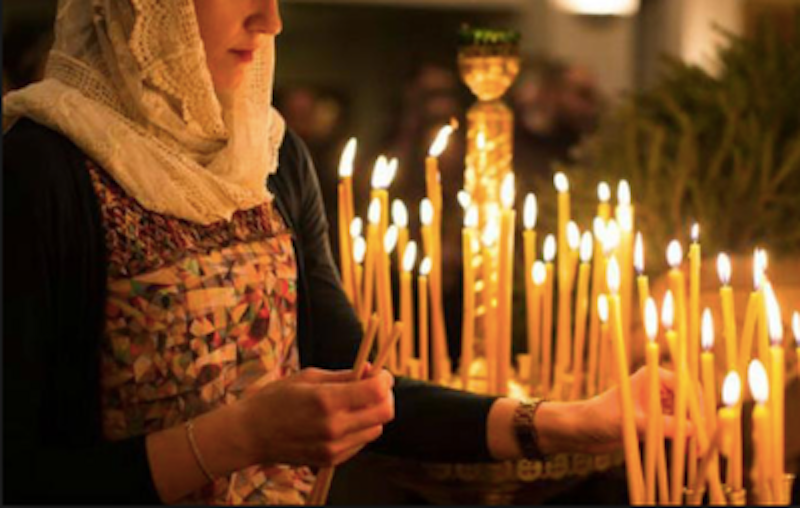 A mere month until Russian Orthodox Easter, our most venerable Pascha, and here at our Benedict Option homestead in Indiana, we’re deep into the rigors of Lent.

As I’ve mentioned, the wonderful Russian priest at our local Orthodox mission church, Father Nicodemus, is spending this Lenten season subjecting himself to a most stern discipline: He’s confronting Sapphic perversion.

Specifically, he’s completing a thorough scholarly review of the entirety of the corpus of Eastern European teen lesbian Internet pornography. The immediate goal is to determine the extent to which young Great Russian Orthodox women participate in this filth.

This is all, of course, part of the Moscow Patriarchate’s broader goal of providing robust pastoral guidance to its flock. It’s come to the Patriarchate’s attention that Great Russian girls are participating in sizable numbers in teen lesbian pornography, and the Patriarchate is concerned to quantify the problem—towards, needless to say, eradicating it. One of the great things about Russian Orthodoxy is that it is the handmaiden to Kremlin power, and so enjoys considerable influence in Russian state policy.

I’ve been helping Father Nicodemus with his work: In fact, the research sessions take place in my study. Since both of Nicodemus’s hands are busy during these scholarly vigils of his—one hand holds his iPad, the other vigorously massages his prayer beads, which he keeps under his robes—it’s my job to type out the comments that he calls aloud in his husky voice.

“Fist,” Father Nicodemus might call out in his earthy Slavic rumble, and I dutifully enter the word in the appropriate column on the Excel spreadsheet that’s open on my laptop. “Latex pole,” he might say at another moment, or “most salubrious flickings of the Little Russian fascist whore’s tongue.” (Yes, “salubrious.” Nicodemus is one of those foreigners who learns English partly by memorizing Latinate dictionary words. This is one of his many charms, along with his delightfully close-set eyes and his rustic cackle. But it leads to solecisms.)

“Felch” was another word that Father Nicodemus grunted out during one of these scientific evenings. At least I think that was the word he uttered. It was hard to tell, as his eyes had rolled back in his head and his breathing was labored—signaling, I think, that he had entered that state of beatitude known to all true Russian Orthodox mystics.

Not recognizing “felch,” I assumed it was Russian word that he had let slip, but I couldn’t find it in the Russian dictionary I keep. (Though I don’t know Russian, to my great shame, I have a phonetic knowledge of the Cyrillic alphabet.) I assume it’s Russian slang, or a regionalism from the Volga basin, that martyr-hallowed ground from which good Father Nicodemus hails.

I must confess, however, that I’ve had doubts as to this project’s effectiveness. I feel that watching these videos is an inefficient method for identifying the nationalities of its various participant sluts. The presumption was that there would be linguistic markers that would let Nicodemus identify which young women were Russian. But it seems to me—and please remember, I’m only a layman—that there’s too little talking in these productions for that method to work.

Then, too, it’s occurred to me that the fact that an onscreen whore should be speaking Russian is in itself less than dispositive. It was one of the many glorious things about the Russian Empire—whether the Tsarist or the Soviet variety—that it forced all of its deservedly subject peoples to learn Russian, the language of Pushkin, while often suppressing or banning their own degenerate native pidgins. Thus, it’s possible that a Russian-speaking whore in a teen lesbian Internet video is in fact Kazakh, Belarusian, Estonian, Latvian, Lithuanian, or Little Russian—in other words, a member of one of those inferior fascist animal-nations around the Great Russian periphery.

In other words, there are reasons to doubt the methodology of Father Nicodemus’s project, even if not its unimpeachable motivation.

I must pray more over this problem, beseeching guidance for how to proceed.