Diary of a Bushwick Buyout #4 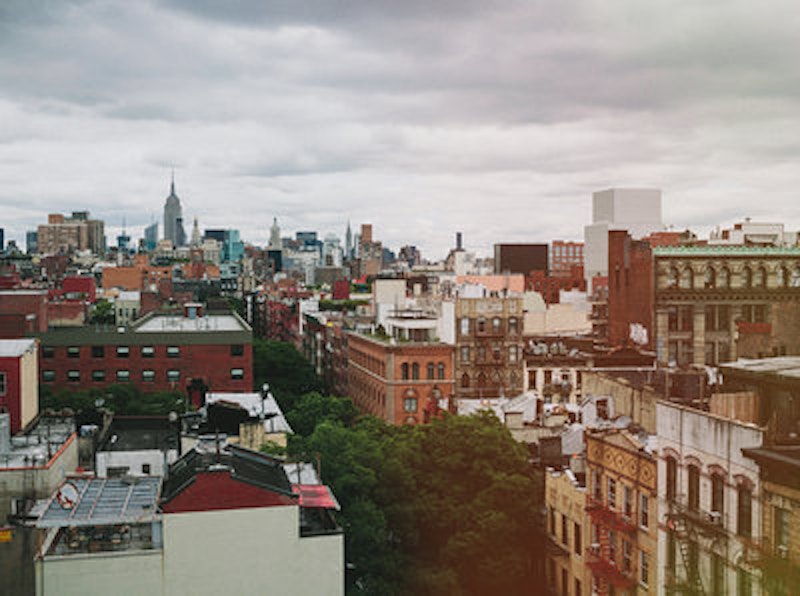 I was mistaken when I said I’d have no problem writing down this buyout stuff. After work, on my walks up Bushwick Ave. with Margo, I’d re-live the visits of Paul and Geoff and ask for her advice. Margo was analytical and helpful. “I really think you should just tell Geoff you’re not interested. Be blunt so he backs off.”

I felt like complete shit. The last few days had made me feel low, like trash that the street sweeper sucks up in its dirty path. Without hesitation, I tell strangers that I’m a cultural arts proposal writer; I told Geoff that when he asked what I do for work. My track record never fails to attract new clients or artists who promise to barter food or art for my services. Since college, however, my true passions have been literature and journalism, but beyond infrequent freelancing I never established a foothold in either. Fast-forward a decade: it was the competitive environment of New York City in which I finally found a groove. In the last two years, I’ve had a few things published and enjoyed both paid and unpaid gigs. I launched an online literary magazine with Margo and attended poetry readings. Because I was writing and reading now more than ever before, I felt compelled to journal the crazy buyout business.

I reasoned that in a trying situation like this, which required me to act, and make decisions, I’d find comfort and space for reflection in writing. But when a drama unfolds with interactions every other day, it’s hard to keep up. I started spending way too much at coffee shops and bars, writing this account to various soundtracks—whatever the baristas or bartenders blasted. Electronica, psychedelic rock, and soul helped my words to flow, but Frank Sinatra clammed me up. The Sunday after Geoff met me, I wrapped up writing a chapter about Paul at Sun/Fun Cafe. I grew hungry and, not wanting to compete with the brunch crowd at the coffee shop, headed home for lunch.

I came home to a man with a bag outside my door. The squat, uniformed officer looked like a compressed Ernest P. Worrell. Simultaneously 25 years old and a golden 60, he wore a filthy baseball cap, under which longish hippie hair covered his ears and neck. “Are you HPD?” I asked.

He swung his bag behind him and turned to me. “Yeah. Are you the tenant of apt. #--? I’ve come for an inspection. We got several apartments on the list. You’re the first. We try to come by at a convenient time, like on the weekend, when we know the tenants can be here.” I said, “Thanks. Come on in.” I opened the door. Ernest held a clipboard with the NYC Housing Preservation and Development paperwork close to my face so I could see his checklist. “Has the super Paul fixed anything since you made the complaint?” he asked.

“No, he hasn’t,” I said. “Paul promised he was going to call me to schedule the work.”

“Does Paul live in the building? He’s supposed to be here. I have a number for him on this paper, but I’m not calling him. Not my responsibility. He knows we’re coming.” In the kitchen, Ernest scanned the cabinets, counter and appliances. “I’m going in the order of my list. I’m not going to focus on anything else now but what’s on the list. Some tenants have us come in and they name off a bunch of other problems, and then the landlord complains, ‘The guy’s harassing me.’ So let’s stay focused. The fridge you have in the complaint. Well, I can tell it’s slanted. It’s an old fridge, about 35 years old.” He scribbled his report with a blue pen. He handed me a bilingual pamphlet about HPD, which I pinned to the fridge. “And the cabinets,” he continued, “they’re not on the list, but they aren’t screwed in properly. They have to be secured to the wall or they could fall down and hurt somebody bad. Not good. I’ll write that up.”

Ernest noted the dead burners on the stove, and we moved on to the bathroom where he documented a Class B “Hazardous” violation, the spewing gape in the ceiling, right above the sink. As he toggled the partially detached door and weak toilet flush and took down his notes, I felt it appropriate to get his take on buyouts. Something about this no-bullshit, lifelong government worker, ostensibly on my side, in my apartment filling his report with renewed and fresh violations, put me at ease and I said, “The landlord wants to buy me out. Isn’t that messed up?” Ernest was unmoved; for a second, he looked at me like I was clueless. “Yeah, but that’s good money. It all depends. I know some people who have taken the buyouts. Some got $30,000 and then others got $150,000. That can be good money we’re talking about. Your landlord’s allowed to make an offer. But if you don’t want it and you tell him, ‘No,’ and he keeps asking every other day, well, then that’s harassment, which is illegal. You report that.”

He eyed the tub and sink. “You got hot water?” I replied that my apartment did at the moment, but sometimes it cuts out in the winter. I said women in the tenant association had mentioned hot water issues, but mine was fine, knock on wood. “Got a note they want us to fix the boilers,” Ernest huffed enigmatically, shaking his head. I recounted the time our tub filled and would’ve overflowed had my roommate and I not bailed it out. “Jesus.” He made a note. I said, “I feel bad for a lady in one of the other buildings. Paul showed me a picture on his phone of her bedroom. A corner of the ceiling had ripped open and barfed wet, moldy garbage all over her bed. Paul just laughed and said he had to get to her place first.” Ernest made a sour face. “He showed you that? I don’t know why. That lady’s place has no bearing on your apartment.”

Same as I did with Paul and Geoff, I led Ernest into my bedroom. He rushed over to the cracked window like a kid at Disneyland. “Now that’s a Class C. Because that’s a broken glass hazard that could cut you.” He dropped his clipboard on the crowded desk before the window and jotted this latest violation. “It’s not the landlord’s responsibility to put a lock on it, because it’s to the fire escape, but he has to fix the glass. If he won’t, we will and it’ll cost him.” He wrote up the moldy corner and ceiling leak too.

“They’re going to hate you when I get done,” warned Ernest. “I’ve checked 15, no, 16 violations on here. Mostly Class B and one Class C, the window.” A sudden fear upset my stomach, and I said, “Paul and Geoff said I was wrong to call HPD, that I should’ve given them a chance. But I told them I’d reported things so many times to the old landlords, I thought they knew. And now they want me out of here.”

“No. Don’t worry. You did the right thing filing the complaint. You pay good money and want to live in a place that’s at least habitable. Hey, where are you from originally? Not here, I don’t imagine.”

“See that. I just think they see you’re a young guy and not from New York. So they prey on you.”

“Prey on my stupidity.”

“Well, not stupidity. But they think they can teach you a few things.” Ernest stood up from leaning on the desk and waddled in my direction. I asked him about lead in an old place like this. “Is there lead? Here?” Ernest repeated. “Probably. But you’d have to request a lead test. We don’t usually initiate that for adults, just if you have kids. Because lead does something to their brains, affects learning. Like I say, first it’s lead, then it’s pot.” He laughed and hugged his bag to his back.

I took Ernest to the final problem areas in the living room: another ceiling leak running brown veins of mold around peeling paint and a broken radiator valve. He looked up. “Yeah, you’re gonna want that leak from the ceiling stopped and have it cleaned up. That’s the kind of mold you don’t want. Shower mold is one thing, but that’s the bad kind up there.”

“Well, we're all gonna die of something. But you want to get that fixed.”

I showed Ernest the “fake” (Paul’s word) smoke detector. “What do you mean it’s fake? It’s old and you got no CO detector. He’s supposed to provide both.” I then caught Ernest snooping around by the door to my roommate’s bedroom. “Think we got an illegal room here.” The door was partway open so he stepped toward it and peeked inside. “Well, maybe not. That’s probably fine. Sometimes we catch these landlords renting illegal rooms. But this seems okay. Like I said, I’m sticking to the list today.”

At that point, I was ready for Ernest to leave. So I started thanking him for the inspection and contrasting his quality care with that of the super Paul. I mentioned that Paul was notorious throughout the building for saying racist and sexist things in tenants’ homes. I’d heard it firsthand and it made him pretty unbearable.

“All the racial stuff,” Ernest said, appearing to push it away with his clipboard, “you got to call the police when you hear it and make a report, or record it. They shouldn’t be doing any of that. Heck, I’m an old guy. Sixty years old. I’ve lived in New York all my life. I try to be straightforward and not go into any of that. Back in the day, we used to say whatever came to mind. That’s why I think, guys like me, we should be grandfathered in. We should be able to show a card.” We enjoyed a laugh. Soon after I followed him to the door, said goodbye, and locked up. I rushed to debrief Margo.