Dutch Ruppersberger and I talk trains. 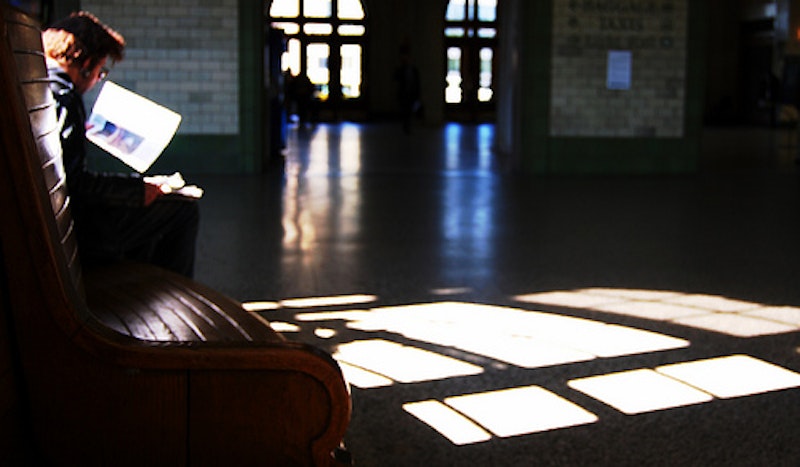 It’s disheartening to know that Rep. Dutch Ruppersberger (D–Md.) hadn’t noticed a rather major change at Baltimore’s Penn Station. The station’s central arrival/departure board—a massive analog beauty of cascading letters and numbers and station stops (not particularly impressive photos here and here)—was replaced a few months ago with a diminutive digital device which was still not up and running as of March 11. Station employees informed me that the sign was donated to the B&O Museum on Pratt Street. The swap is disappointing, though it's diffucult to imagine how much of a pain it would be to service what is certainly a box chock full of tiny gears. But the charismatic representative from Maryland's Second District grabbed a spot of food at the station’s newest gastronomic arm, Java Moon Café, and informally talked trains and their stations with me.

So far, stimulus money has only gone to the BWI station, but Ruppersberger spoke of Washington, DC’s Union Station as a model to emulate. Closed for renovation for most of the 1980s, Union Station is now a serious hub of both tourist and commuter activity, with a wonderful food court (that’s relative, I guess), decent shops and an efficient flow of people and trains. As Ruppersberger pointed out, the station turns a profit for the city.

But Union Station is more than a decent cheese steak and a two-floor Victoria’s Secret. It is one of the more spectacular pieces of architecture in a city bursting with similar monuments.  Facing south, the station’s façade consists of massive arches and barrel vaults capped with shining white marble. A great array of flags and a central fountain make for a humble front yard to the palatial train station. Walking out the front you’re immediately greeted by the Capitol, perhaps DC’s most grandiose architectural milestone, your transition into the city a seamless one.

Baltimore’s Penn Station, though a fraction of the size of Union Station, is not entirely overwhelmed by its resplendent cousin to the southwest. The outside ringed by iron tracery and lamps and beautiful tabs of green glass, the lobby topped with exquisite glass mosaic domes and the main area full of curvaceous wooden benches, Penn Station is a gem of a building, perfectly self-contained and subtle. Station managers call out the arriving trains with unbelievably perfect Baltimore-enriched nasal whines, the floors are marbled and the huge windows let in more natural light than any other public building in Baltimore.

But some crucial aspects of the station’s charm have been diluted: the station’s arrival/departure board is gone, for instance; replacing the small no-name-yet-pleasant café with a goddamn Dunkin’ Donuts; and the opening of the aforementioned Java Moon Café. This spot, a good idea in itself, is nevertheless a wash of soulless larder offerings. It sports a small bar with three beers on tap—Bud Light, Michelob Ultra and Fordham Ale—and a bunch of bottles such as Heineken, Blue Moon and Newcastle. The café side offers one or two actual juices, a general array of pastries and pots of coffee. It could be worse, I guess, but Ruppersberger and I agreed that any serious renovations of the small station need to preserve the place’s charm. As a small move, I would gently suggest moving the fantasically bland sculpture from the front of the building and replacing with something that actually provides some sort of visual continuity with the surrounding urban landscape.

But the aesthete in me bows before the practical commuter. Before we clean any panes of glass or install a juice bar, something needs to be done with both the Amtrak and Marc lines that connect Baltimore and DC. A one-way Marc ticket to DC is an easy $7, though the trains back up and delay with depressing regularity. But on weekends and Federal holidays Amtrak takes over and charges you, at the least, $15 to travel less than 50 miles. If your plans take shape even slightly at the last minute, that price doubles, regardless if you’re going to BWI or DC. It’s a shameless racket, and it’s no wonder Amtrak is struggling to make ends meet. Cheap, reliable transportation is crucial for both commuters and tourists. Once a massive burgeoning metropolitan corridor, the passage between Baltimore and DC is filled with junkyards, porn stores (“adult boutiques”), swamps, freeway traffic and graffiti. A better Marc train isn’t going to revitalize that whole stretch of land, but a fresh start with our trains, tracks and stations would be a huge first step in addressing carbon emissions, urban renewal and the availability of jobs.

Let’s hope we can keep things classy in the process.