Being foreign, atheist and white at the Feast of the Black Nazarene in Manila. 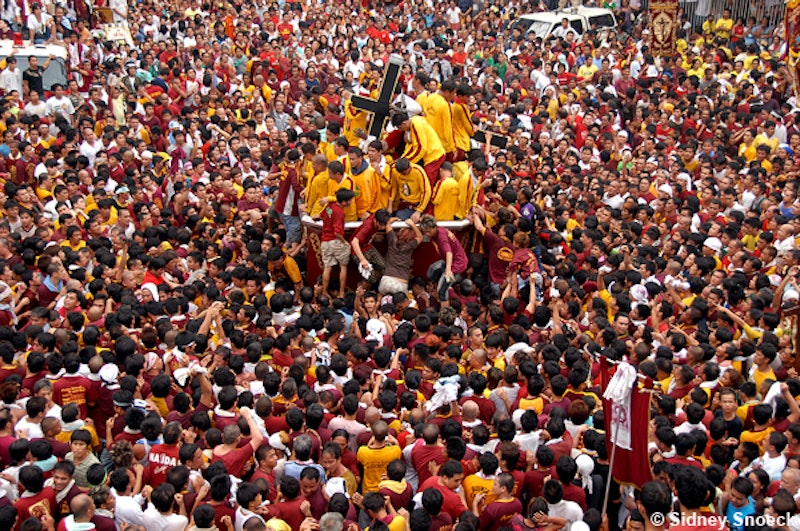 I recently quit my job and started a year of travel around Asia. Last month, as I considered making the Philippines my next stop, I heard that the annual Feast of the Black Nazarene was about to take place in Manila. I immediately bought a ticket and headed over. It wasn't religion that drew me, since I'm a third-generation atheist, and I really had no idea what the day entailed, but it sounded intriguing and I had some vague idea that I'd get a witty Facebook status update out of it.

The Black Nazarene procession takes place in Quiapo, a small Manila neighborhood with a grand past and a slightly less impressive present—it's known for pirated goods, pornography and pickpockets. The procession takes its name from a life-sized, dark-brown statue of Jesus brought from Mexico in 1606.

Once a year the statue and dozens of smaller replicas are carried through the streets, and every year millions of people from all over the Philippines turn up for the event. It's no orderly parade, but a teeming mass of sweaty, devout Filipinos, all desperately trying to get their hands on a statue of black Jesus. And every year a few of them die in the process.

The people at the hostel where I was staying looked alarmed when they heard I wanted to go to the procession the next day. Travelers, despite our best intentions and highest hopes, usually stick to the edges of the culture we visit. Not because we don't want to get involved, but because in many countries the opportunity to interact with locals other than as customers comes so rarely.

My desire to jump right in made the hostel staff nervous. One of them tried to talk me out of it. Another finally drew me a map and helped explain how to take a Jeepney (Manila's favored form of public transport, made from abandoned US military jeeps) but advised me not to wear jewelry, take a camera or bring more than a dollar or two with me. She said I'd better leave the hostel by 7:30 a.m. in order to get a spot before the streets filled up.

I was planning on heading toward the Quiapo church, officially the Minor Basilica of the Black Nazarene. I only had a vague idea of where it was, but I knew how I would find it. A large percentage of the Black Nazarene's followers walk the 15-hour procession without shoes—braving dog shit, broken glass, lit cigarettes and various parasites in order to demonstrate their devotion. So I followed a barefoot family off the metro at what I hoped was an inconspicuous distance and soon found myself on a sidewalk that was quickly filling up with people in maroon and yellow shirts emblazoned with pictures of their Messiah. My favorite read, "Pardon me, Señor Jesus."

After receiving so many warnings and skeptical looks, once I arrived on the streets of Quiapo I wondered if I'd made a terrible mistake. Even after months of solo travel, I'm fearful at the best of times. But after hearing from all the locals I met in Makati, the tony Manila neighborhood I was staying in, that they wouldn't be caught dead on the streets during the Feast of the Black Nazarene, I was just waiting for the humiliation of having my purse swiped and mentally cataloging whether I had backed up my camera recently and had copies of my credit card back at the hostel. I didn't see any other foreigners or tourists around; it was just me. And I was afraid.

Within minutes of my arrival a news team from GMA, the Philippines' major television station, swooped in, probably to report on the first white girl stupid enough to show up for this event. They asked me why I was interested in the Black Nazarene, and at that point I still had no idea. I couldn't come out and say that I found the idea of black Jesus amusing, so I muttered vaguely about being curious about things that bring communities together. It was already 80 degrees at nine in the morning, but when the interviewer asked me, on camera, if I wasn't scared to be there that day, I started sweating. "Why? Should I be?" I asked, petrified.

"No, no, I'm just kidding," the interviewer said, laughing. "But seriously," he said, putting his hand on my shoulder, "are you scared?"

Once the TV crew left, I was on my own. But now I was practically a celebrity, and people started talking to me. First little children greeted me, usually in very good English, eager to try out their language skills with a foreigner. I was offered candy and drinks by barefoot devotees who, rather than seeing me as an interloper to their celebration, sought to welcome me.

I met a tiny girl named Rosa whom I talked to as if she were a child, thinking she was nine or ten, until she told me that she was 16. She was with her four sisters, one of whom had a shaved head due to a skin disease; only two went to school. They had been taking part in the procession, barefoot, since they were small, even though it was traditionally a male-only affair. "We are very devoted," she told me, and her little sister shyly nodded. While I spoke with her, a man standing nearby joined our conversation, eager to practice his (already excellent) English before he moved to California in the spring.

Raymund spent the next four hours chaperoning me around the streets of Quiapo, telling me to watch my purse every few minutes. If there's one thing more dangerous than Manila, it's how dangerous Filipinos think Manila is. Raymund sought to make sure that I, being a foreigner, noticed all of the things about Filipino culture that he was proud of, and some of the things he wished he could change. "Filipinos are very devout," he'd tell me, as a group of people carrying sculptures of Jesus being crucified paraded past. "Some Filipino children smoke already," he said, shaking his sweaty head in dismay as we watched a man sell a cigarette to a six-year-old and then light it for him. Raymund also translated what everyone was saying about me in Tagalog as we walked past. "They think you are wearing contact lenses to make your eyes so blue."

Raymund also told me the story of how the Black Nazarene had blessed his own family. His sister had been married for eight years and was heartbroken because she and her husband did not yet have children. Raymund convinced his brother-in-law to attend the Feast of the Black Nazarene. It wasn't easy, he told me. Some people have a hard time believing. But the brother-in-law came, and when the Black Nazarene finally passed by him he prayed for children. By the time of the next procession a year later, Raymund had become an uncle.

It's this belief that drives so many Filipinos into the streets of Quiapo in an event that results in at least a few deaths and dozens of injuries every year. YouTube videos of the holy day fill me with horrified claustrophobia; I can't believe I was part of that thronging, fervent sea of humanity desperately trying to launch itself at Jesus as he rolls by, injuries be damned.

The devoted throw pieces of cloth, some printed with the face of the Black Nazarene, at the statues—not just the actual Black Nazarene, but also all of the replicas that parade past every few minutes all morning. The people traveling with the statues for just this purpose pluck the flying rags out of the sky and wipe the face and feet of the statue before launching them back into the crowd. The air is filled with towels, washcloths and scraps of fabric, as the devoted strain to be closer, one way another, to Jesus.

Raymund escorted me through the crowd, explaining all this to me, pointing out to everyone that I was just visiting, and the masses would part to let me through. The level of courtesy, in what was essentially a three-million-strong mosh pit of underprivileged Filipinos hoping for a miracle, was nothing less than stunning. I kept expecting someone to ask me for money, as people did in other countries whenever even the tiniest favor was given. But then I was ashamed of myself for thinking such a thing, because it never happened.

Some call devotion to the Black Nazarene paganistic. Certainly I saw little of the dour conservatism that I associate with Western Christianity during that feast day, where faith healers abounded, exorcisms took place on the sidewalks, and children danced barefoot in the grimy streets. And even though I wasn't religious, no one cared. They were happy to include me in their holy day, in spite of the fact that I was wearing shoes. For the first time in my four months of travel, I really felt a part of the community I was visiting; I had been let in and wasn't just watching from the periphery. And for the first time in my life I understood why religion is so appealing, and how powerful a feeling of community it creates. It was like being at a rave but without the comedown.

After five hours in the blazing sun I was dizzy with fatigue and too hot to get any relief from the various beverages sold by the street food vendors. I was ready to go home, but I wanted to see the Black Nazarene. And then I knew it was coming as the crowd exploded, chanting and swinging their towels above their heads like so many lassos for Jesus. Is directing a wish to the Black Nazarene the same as wishing on birthday candles—if you tell, it won't come true? I don't think that's how it works with Jesus, so I'll admit that as the statue went by, a burgundy-brown Jesus on a giant cross, I wished that over the course of my travels I could have more days like this one, here in the Philippines.

After the procession passed, Raymund walked me to the metro to make sure I didn't get lost in the crowd. After depositing me safely in the station he shook my hand and explained that he was going to continue on with the procession, which would last another seven hours. Then he walked back, barefoot, to follow the Black Nazarene.