Jesse Bullington’s The Sad Tale of the Brothers Grossbart (2009, Orbit) 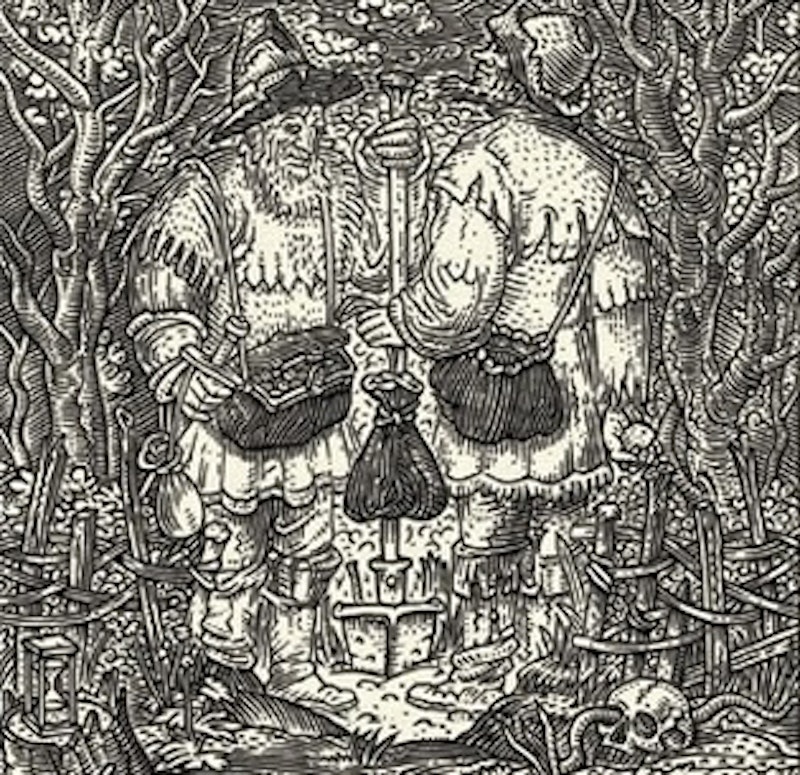 On the deck of a sailing ship Manfried and Hegel Grossbart, two depraved German graverobbers, are bickering over the best way to kill a witch. It’s 1364, and the brothers have just fled a burning Venice in the company of a pirate captain, a kidnapped French knight, and a rabble of Italian thugs and sailors. The captain’s wife has, on several occasions, demonstrated eerie powers that compel people to drown themselves; the brothers suspect that she may be either a witch or a sea monster. Hegel feels that it would be most expedient to throw her overboard. Manfried disagrees: “Burnin’s what’s done with witches, as you well know from experience and common fuckin knowledge besides."

At this point, a good three quarters of the way through Jesse Bullington’s wildly energetic first novel, I realized exactly why I had been enjoying the book so much. Bullington has given Dark Ages Europe the Deadwood treatment, heaping profanity, humor, grit and violence on the shoulders of a wandering adventure through medieval Europe. The Sad Tale of the Brothers Grossbart follows Manfried and Hegel as they flee south from the Holy Roman Empire, through Italy, and eventually into Egypt. The pair rob graves for a living, following the trade of their repulsive father, and they have internalized a family legend about the boundless riches of the tombs of Egypt, which they assume await their plundering.

Bullington makes this ignoble quest the occasion for a well-researched tour of the least savory parts of medieval Europe, from desolate mountain passes to plague-ridden monasteries. The Grossbarts themselves come across as a hybrid of Homer Simpson and Anton Chigurh: they take childish delight in food and drink, adore the Virgin Mary (Jesus they consider a useless milksop), both are sexually untutored and both begin the book as middle-aged virgins. As the narrative progresses they grow more and more comfortable with senseless murder, but Bullington adds light touches of remorse and layers on enough gore and silliness that they never seem utterly repellent (or, in fact, they seem utterly repellent from the first page, but in such a cartoonish way that they draw the reader in).

The Grossbarts blithely ignore Medieval distinctions of class and cheerfully bully priests, kings and merchants alike. They bicker with one another often enough that it becomes a motif, but not so often that it overwhelms the narrative, and their occasional forays into philosophy and philology are usually light and funny. So too is Bullington’s dialogue, which occasionally reaches the tart beauty of Deadwood but is often at least amusing. The brothers’ swagger and intimidation become tiresome, but Bullington clearly has limited interest in making his protagonists likeable, and every other character in the novel considers them repugnant bores.

Bullington clearly wants to communicate the grit and horror of fourteenth-century Europe, and he does so successfully, but he also introduces elements of fantasy with a distinctive, and horrific, modern spin. The brothers meet witches and demons and various monsters, all of which shed the stately safety of their medieval origins and emerge as terrifying grotesques—Bullington’s monsters don’t look like the two-dimensional illuminations of a bestiary:

Guessing from his sparse and wispy hair he held over fifty years on his wrinkled crown, but his teeth and eyes appeared hard and sharp. His face, however, did not hold their attention.

Under his chine any semblance of humanity was absent, his body instead akin to those of the panthers and leopards that stalk desolate regions. His mottled pelt bristled, contrasting splothces of naked skin.

Brothers Grossbart is a travel novel, somewhat resembling Blood Meridian or perhaps Stephen King’s Dark Tower series (though its themes are more modest and its language less powerful than either). Bullington has a gift for painting scenery with simple economy:

They were climbing a ridge spotted with boulders and what small patches of snow the sharp wind permitted. Hegel helped his brother to a hollow between two of the monstrous stones and they made camp.

In a memorable later sequence the brothers and a monk named Martyn eat some moldy rye and descend from these same mountains amid horrific hallucinations—Bullington treats these visions allusively and gently, which is somewhat surprising given the brutal frankness that he brings to most of the narrative:

For the demon-hunting holy man their travel led over mountains of ash and through clouds of sulfur, steam and venom raining upon them, the wails of the damned giving them no respite. His beloved Elsie remaind absent, but Saint Roch harried their wagon, his moldering corpse demanding the return of his stolen finger.

Bullington delights in wounds and mutilations, and the Grossbarts’ violence provides him with many opportunities to assault the reader with gory passages that are, frankly, gross. Some of the non-gory passages, such as an amorous encounter with a witch, will turn your stomach. Whenever things slow down Bullington has one of his characters vomit, an unusual touch that he repeats so often that it becomes rather funny. The action scenes that produce this violence are the novel’s weakest feature. Bullington writes sprawling, cinematic scenes of bloody conflict, but he recruits so many characters and details their actions so minutely that it becomes a confusing blur, giving the impression of men fighting with little for the reader to hold onto. The action of the novel begins with one of these scenes, an ambush on a narrow mountain pass. This goes on for much too long and is so badly told that an impatient reader will likely renounce the novel entirely.

That would be a shame, because Brothers Grossbart is, in its coarse and sanguinary grandeur, rather unlike any other novel I have ever read. Bullington does not dare complex themes—he treads lightly on class conflict, desires for paternal approval, prejudice, the weakness of knowledge in an age of ignorance and the indelible bond of the brothers themselves, but overall he sticks to brisk action and memorably grotesque showstoppers. The novel smacks of Blood Meridian, Army of Darkness, various westerns, maybe Umberto Eco, but despite its multiple influences it belongs wholly to its author.