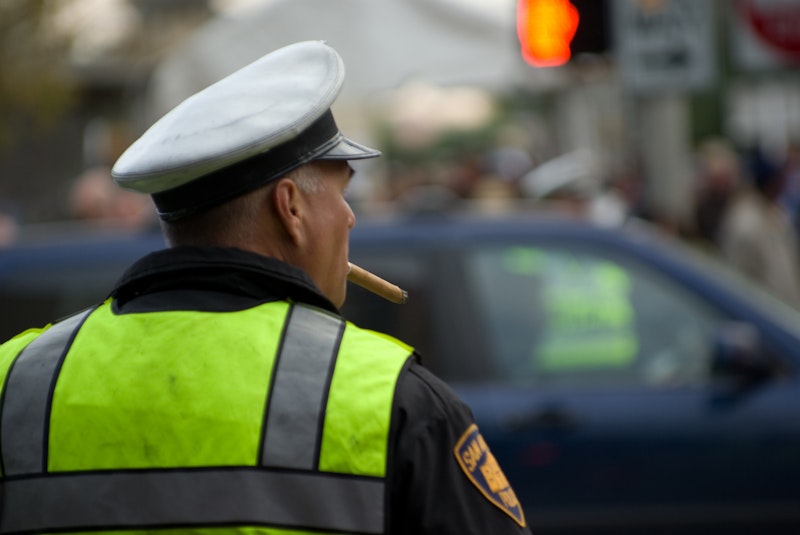 To start: I was guilty. And as far as I could tell, the people sitting around me in traffic court—the old man sitting next to me with his snapshot photo evidence, the penitent son with his reproving father, the young thug with a face that had been terribly burned, scarred, and reconstituted—before the Great Seal of California, all of us in the Beverly Hills Traffic Court, sat guilty. I would make a rather biased judge.

The court clerk turned to the bailiff and whispered, "Is she even in chambers yet?" The official clock was nudging past 9:00 AM for a session that should have commenced thirty minutes earlier. "Fridays," the bailiff said and returned to her phone call. While we sat contemplating our pleas, the bailiff was trying to quietly book a reservation at a shooting range.

Five months prior, I was pulled over for the kind of routine traffic stop that you just know is going to be costly. Thirty minutes and a short stint in the backseat of a cop car later, I had a ticket and a court date. My crimes were procedural: I'd lived in California longer than the 30 days required to head down to the DMV and apply for a CA Driver's License. And my registration wasn't up-to-date. These were not crimes inspired to draw out the sympathy of the officer who pulled me over. Actually, I was lucky he didn't impound my car on the spot. All I could do was to hope the cop would grant me one additional favor and sleep through the court date, or that the judge was more lenient than I would be.

But I had a plan designed to warm even the most wary of temperaments. "I'm not here to give you any excuses," I would tell the judge. I would say that she's heard too many sob stories and that I didn't want to waste her time. She would interrupt me to compliment my black two-piece suit and question me about the identity of my tailor. I had it all planned out.

Actually, choosing the suit was about as far as I had gotten in the planning process. For all the hundred or so episodes of Law and Order I've seen over the years, I quickly realized how lost I was when it came to actual court proceedings. The court date I booked months prior turned out to only be an arraignment, one of those familiar words I couldn't actually define.

The judge, a woman who like all female judges of a certain age, resembled Judge Judy, thankfully arrived to clear things up. "Of all the people gathered today in the courtroom, I can bet that I am the only one glad to be here," she said, starting a breathless half-hour lecture on the fundamentals of traffic court. I liked her right away.

The arraignment, I learned, was a preliminary session just for the purpose of taking down pleas—“guilty,” “not guilty,” or “no contest.” Our pleas would be heard and recorded in rapid succession, after which we'd all shuffle next door to the clerk's office to pay the court a fine for our guilt or to post bond in hopes of our innocence.

This was another thing I never fully understood: Regardless of my plea, I'd have to pay the full price of the ticket. If I admitted guilt, I'd pay on the spot. If I wanted a fair trial, I'd still have to pay the full amount in hopes it would be refunded to me if I won my case. It didn't matter that the cop who pulled me over didn't show up in court for the arraignment—he would only be summoned if I pled “not guilty” and went to trial.

The judge continued: Though we were sitting in a courthouse in one of the wealthiest neighborhoods in the state, court fines are set by the lawmakers in Sacramento. Once a defendant was charged, the judge couldn't do anything to ameliorate the fines. The fines themselves stopped at a maximum of $100, which sounded deceptively reasonable. What made them so much more expensive was the buffet of service charges and penalties added on top of the fine—sometimes seven times the cost of the original fine. The cheapest ticket came in at $20, which topped out at $141 with all of the additional fees. Ouch.

By the end of the judge's lesson, I knew how I would plead. Unlike a speeding ticket, my charge didn't involve a subjective opinion or questionable equipment. I hadn't taken care of the details; a trial wouldn't last long if the cop showed up. The last thing I wanted was to prolong this tortuous process, only to be justly defeated in the end.

I didn't have much more time to consider it. The speech was over; the hearing had begun. All twenty of us were called to the stand at once, lined up—a row of suspects in front of the judge. The first name on her list was leaning against the podium in a gray hooded sweatshirt, an obvious veteran of the court.

His charge was the most serious given in traffic court—driving without insurance—compounded by the hefty fine for skipping a previous trial. He was looking at bail money in upwards of a thousand dollars. He took this news with an air of indifference and requested an extension on his court date and then an extension on his bail payment. The judge, not even taking the time to look at the defendant, said, "You're wasting my time with these shenanigans. You didn't listen to my speech," and before the man could respond, she sent him down to the clerk to pay for his “not guilty” plea.

I didn't have much time to mourn: I was next. The judge was quick: "Forest Casey. Do you have a current driver's license in the state of California?" I dug my wallet out of my suitcoat and fumbled around with the license before handing it to the bailiff, "Here. Yes, I do."

"Umm, guilty. Guilty, your honor." She was filling out some paperwork on her desk and spoke between her notes. "I'm going to drop the first charge, Driving Without a Valid License, but you'll have to pay for the second, Driving With Expired Registration. The fine of the ticket is $50. Total price: $280. Go see the clerk."

I barely had time to register what happened; in under a minute, my arraignment was over. I walked out of the courtroom trying to put the pieces together. Though the service charges for my ticket were piled on like a Thanksgiving plate, I'd been spared the worst of it. I was expecting to pay double what I did.

So, ten minutes later, with my debit card swiped and my signature on a short receipt, I walked out of court guilty, though forgiven. It was 11:00 AM. Time to go find a beer.