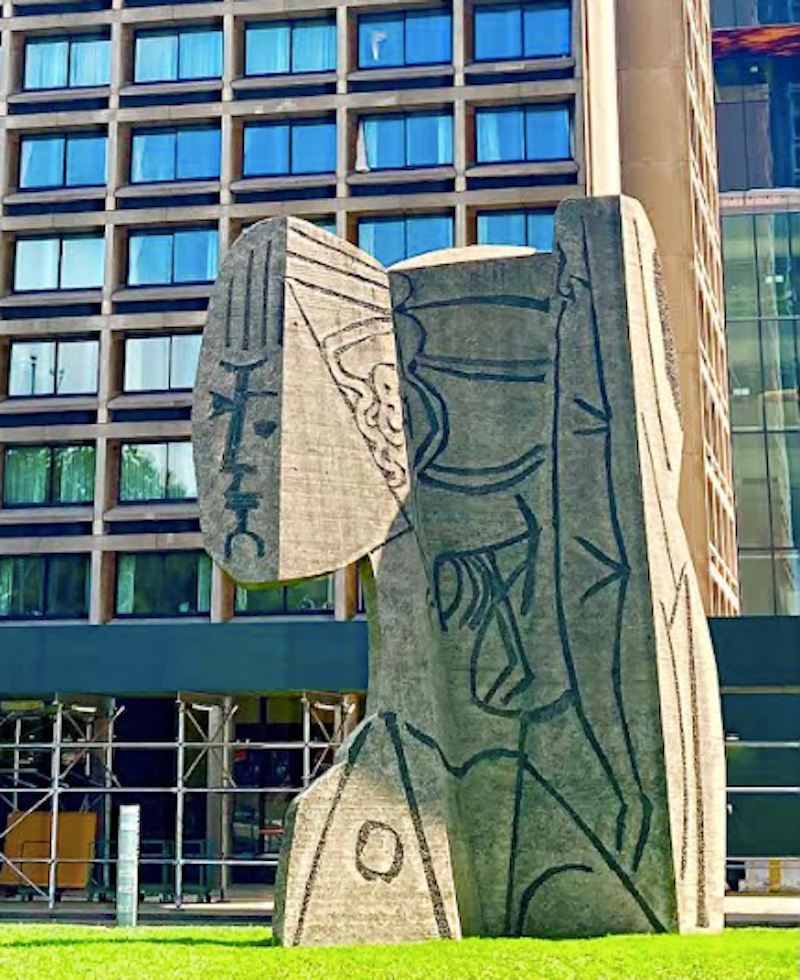 How quickly the seasons change. In Greenwich Village stands “Bust of Sylvette,” one of two major outdoor Picasso statues in the United States. Sandwiched between the I.M. Pei Silver Towers on Houston St., the statue sheds no tears as waning sunshine cuts through the buildings, casting long shadows on a seasonal rite of passage.

Across Bleecker St. in Washington Square Village on a hot afternoon in late August, 12 of the apartment building’s 13 cherry trees appear to be dead in a garden. A few dangling brown leaves remain hanging on a jumble of twisted wooden branches. Cherry trees at times can look like scary dancing skeletons. The drought has taken its toll.

Over 200 years ago at age six, George Washington decided to try out his new hatchet. One of his favorite pastimes: making sticks, so he whacked a cherry tree out in the family garden. The tree was his father’s favorite. Little George took the moral high road when confronted over the issue.

“George, do you know who killed the beautiful little cherry tree in the garden?”

“Father, I cannot tell a lie…” George fessed up. Afterall, it was his tree.

The cherry tree story appears in 1806 and took root. Told by an evangelical author and bookseller Parson Weems, the tale continues as a significant part of American folklore.Parson Weems’ Fable, a 1939 painting by Grant Wood illustrates the incident. A further examination reveals Wood’s painting, with its Midwest sensibilities, makes other historical references about our Nation’s history.

This summer wasn’t a chance for Wagner’s epic The Ride of the Valkyries to open a prelude to a menacing storm. The tumbling, dark vapors of vast steam clouds gather strength. Sudden lightening forks with blasts of loud thunder and gusty winds come to mind. Some might think about a famous movie scene with battalions of military helicopters storming over the landscape of Vietnam. People outside run for cover. City umbrellas open in full bloom.

After a wet spring, this year the City had no severe storm threats, just one brief thunderstorm. The garden’s calls for water went unanswered. As of August 23, 2022, according to NOAA, 36 states are experiencing no rain, part of a severe worldwide drought.

There’s noticeable change in schedule, as a parade of NYU students return to their dorms. Leaf colors are starting to separate into the classic, sublime rusty fall hues. I sit down for a quick lunch outside and take off my cap. The last gasp of summer causes sweat drops to bead on the brow.

I had a chance to refinish a cherry dining table once. The amazing grain patterns in the reddish-brown hardwood makes beautiful furniture. It’s a favorite among those doing woodwork.

Today, there’s not much shade in the garden, unlike a visit here in early springtime. Back then, you could float in on a cool spring day and wade through a sea of silver white cherry blossoms snowing across the garden. It was surreal. Now the soil’s dry, hard and cracked. I brush aside a few leftover crumbs of bread off my pants. They fell onto the ground. A large flock of hungry birds suddenly appeared out of nowhere: pigeons, starlings and house sparrows.

She referred to me as a “young man” while pointing a finger at me. “Don't feed the birds, please.” Ms. Sidewalk Supervisor had a point, but etiquette has unwritten rules. In New York City, it’s technically against the law to feed pigeons; a rarely enforced ordinance. You need to be caught in the act by a Health Department employee. I imagine some find such behavior challenging to comprehend.

I read somewhere pigeon feeding calms a typical New Yorker’s anxiety and fears. That’s fine with me. I took a deep breath to clear my head. Gathering my thoughts, I packed away a half-finished tuna sandwich and looked around for a nearby trash receptacle, poised to leave the seasonal beauty.

Off in the distance, the pigeons cooed. September fall semester 2022 is starting, new lessons to be learned. I remained silent and continued along my way.