In addition to Ray Bradbury, thank the man of steel, Andrew Carnegie, whose works bridge the clouds and frame the heavens. 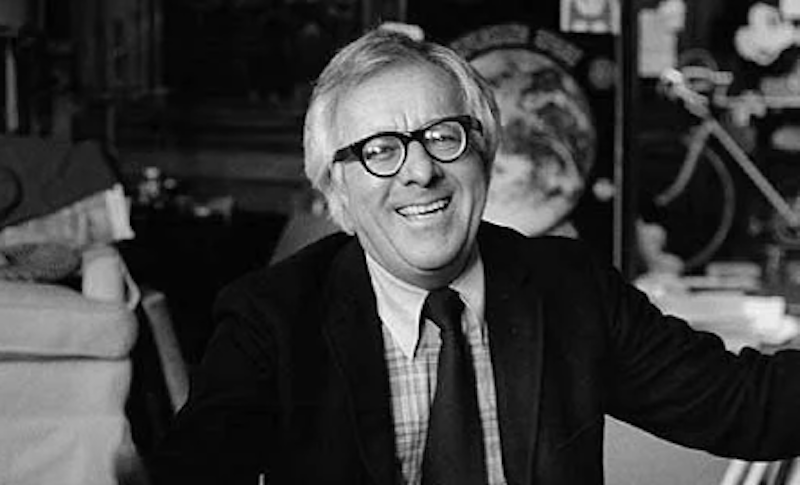 West of the green light and the arc of the shore, on a bluff above the tracks, stands the architecture of literacy. There, amidst the smell of smoke and rye, stands a monument to the lights of art and science. There, beneath the color of fog over the Western Front, stands a mansion. There, at the northeast corner of Washington St. and Sheridan Rd., stands the best small college in America: the Carnegie Library of Waukegan, Illinois.

If the scene doesn’t resemble the scenery of Green Town, Illinois, or if the sky looks more toxic than tame, evoking memories of the Great War and the Meuse–Argonne offensive, thank the resident of the house, Ray Bradbury, whose works romanticize the past.

Thank him for reading the library, and revering it too, so future generations may climb the same steps and ascend into the kingdom of knowledge.

Thank the man of steel, Andrew Carnegie, whose works bridge the clouds and frame the heavens; whose greatest works span the world and grace the land with temples of glory, inside of which lay Bradbury’s Byzantium of works by Hawthorne, Frost, Hemingway, Steinbeck, and Edgar Rice Burroughs.

Thank heavens for the Carnegie libraries, an intellectual electrification act like no other, with power stations throughout America.

The afterglow from the Waukegan station alone continues to enlighten readers, with more than eight million copies of Bradbury’s works available in 36 languages.

The works originate from the designers of the libraries in which Carnegie’s name endures in stone and extends over everything, affirming the words of a preacher and the acts of a King—tying together all Americans, black men and white men, in a president’s greatcoat of destiny.

The libraries connect the biographer of the greatest president from Illinois with the only president born in Illinois, as Galesburg, Illinois, is where the lives of Carl Sandburg, Abraham Lincoln, and Ronald Reagan converge.

There, 200 miles southwest of Chicago, stands the home of the poet of the people. There, beneath the granite of Remembrance Rock, lie the ashes of Sandburg and his wife.

Three minutes from there, on South Cherry St., stands Old Main, the site of the fifth Lincoln-Douglas debate. There, on a wayside marker outside the building, the Rail Splitter’s words ring true. We hold his confession to be self-evident, that slavery is a moral, social, and political evil.

Five minutes from the land of Lincoln’s speech, on North Kellogg St., stand two houses from Reagan’s grade school years. (Thirty-two years separate the mile-long journey from Reagan’s childhood home to the house on Walnut Ave. Such is the distortion of time and space, of the year of Reagan’s departure from Galesburg and the year of his first date with Nancy Davis from the same town.)

Gone, however, is the Carnegie Library on East Simmons St.

Four years and six months after the publication of Fahrenheit 451, a gorging fire destroyed the library and burned over 200,000 books.

The answer lies in the education a library provides.