Bernie Madoff and the Door of Truth 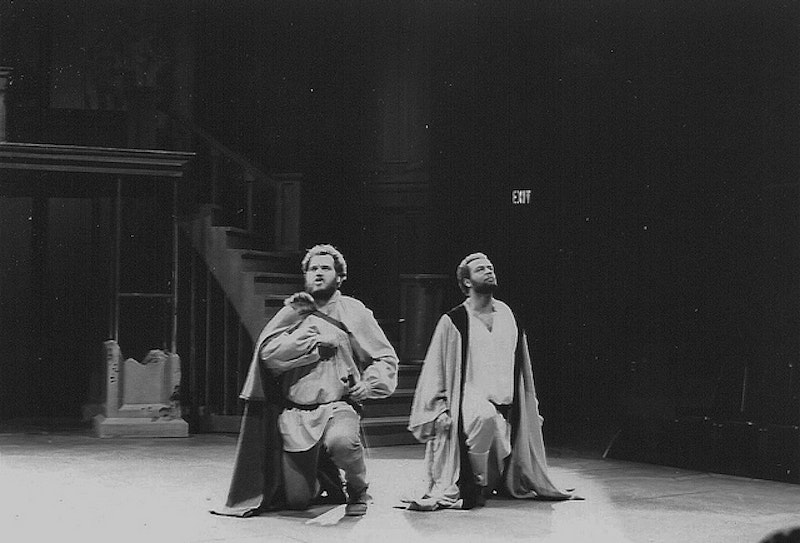 The Bernie Madoff scandal has changed the way many perceive their friends and acquaintances, making them more distrustful, more skeptical. Madoff, once a legend on Wall Street and chairman of the NASDAQ, ran a successful, legitimate business that was separate from his fraud. One wonders, why and how did he betray so many friends?

Of course, I don’t have the answers. But fortunately, we can turn to Shakespeare for some clues, wisdom and guidance about how evil functions. In contemplating the Madoff story, I cannot help but consider Shakespeare’s most wicked villain, Iago. The similarities are stark and striking. Like Madoff, Iago is an evil genius—brilliant, cunning, obsessed with willpower, and a keen penetrator of human psychology—whose actions devastate an entire community, causing chaos, suicide and widespread suffering.

The two are, as Melville puts it in Billy Budd,

madmen, and of the most dangerous sort, for their lunacy is… protectively secretive, which is as much as to say it is self-contained, so that when, moreover, most active it is to the average mind not distinguishable from sanity, and…  whatever its aims may be—and the aim is never declared—the method and the outward proceeding are always perfectly rational. (39)

They suffer from “the mania of an evil nature, not engendered by vicious training or corrupting books or licentious living, but born… and innate, in short ‘a depravity according to nature’” (39). In reading various articles and books and watching shows about the Madoff scandal side by side with the text of Othello, we can find many connections between Shakespeare’s villain and the monster who stole billions from friends and unsuspecting institutions.

Much like Iago, Madoff held a position that seemingly cemented his authenticity. Madoff’s impressive reputation coupled with his vast wealth and influence over the SEC and NASDAQ commanded trust. His life story seemed to further intensify this sense of security: he was born into a Jewish New York family of modest means, and, in 1960, with $5,000 and his father-in-law’s help, Madoff started an innovative, legitimate stock-trading business that enabled investors to purchase certain stocks quickly and cheaply. The company, Bernard L. Madoff Investment Securities LLC., eventually became massively successful.

Similarly, Iago is Othello’s ancient, a soldier for and esteemed advisor to his general. As “ancient,” or “ensign,” Iago is “the junior officer in an infantry regiment” and “traditionally the carrier of the ensign flag.” Othello considers him a loyal confidant, calling him “honest Iago” throughout the play. Iago and Madoff’s power to deceive hinges on their status of reliability.

Those who knew Madoff never suspected that he would or could pull off such a stunt. Story after story quotes victims expressing their incredulity upon learning the tragic truth. For example, on PBS’s Frontline: the Madoff Affair, Michael Bienes, a long-time partner, recounts how he received a phone call that something happened to Madoff. What, did he die? replied Bienes. “No, he’s been arrested.”  Must be for some sexual or petty offense, was the next assumption. “He’s been arrested for fraud.” That the truth never occurred to Bienes underscores how far from suspicion Madoff was in the minds of many who knew him. In retrospect there were obvious signs that a Ponzi scheme was in motion. But the victims did not let themselves draw any discomforting conclusions. And, according to Harry Markopolis—the investigator who uncovered the scam years ago, only to be ignored by the SEC—apparently those who should have known convinced themselves that if Bernie was a crook, he was presumably stealing on their behalf and would not harm his friends.

The same is true of Iago—everyone in Cyprus perceives him as “honest and just.” And when his treachery is exposed in act V, his wife, Emelia, incredulously asks Othello over and over if “my husband” was the man who accused Desdemona of unfaithfulness, exclaiming upon Iago’s entrance, “He says thou told’st him that his wife was false: / I know thou didst not, thou’rt not such a villain: / Speak, for my heart is full” (5.2.165-170). Her staunch resistance to reality mirrors Bienes’ reaction to Madoff’s fraud, underscoring the inconceivable nature of the crime; and yet, as with the bankers who should have suspected Madoff, Emelia faintly anticipates Iago’s malevolence all along, calling him her “wayward husband” in one instance.

But he also knew how to look people directly in the eye and tell appalling lies. One of the anecdotes Judge Chin pointed to when announcing Madoff’s 150-year sentence involved a woman whose husband died and, unsure about what to do with her money, turned to Bernie for guidance. Madoff wrapped his arm around the widow and assured her that her savings would be safe with him.

Iago plays people with comparable cunning by forging friendships with his affable and seemingly frank demeanor. At one point, during a night of drinking, he treats his fellows to a solemn sounding song poeticizing how pride is pulling the country down. In another scene, he advises Cassio in the name of “the sincerity of love and honest kindness” (2.3.326) on how to restore his fractured relationship with Othello. Furthermore, when Roderigo, frustrated and ready to abandon his hunt for Desdemona’s admiration, threatens to seek satisfaction of Iago, the latter assumes a confident exterior, induces Roderigo to shake his hand, and then proclaims, “if thou the next night following enjoy not Desdemona, take me from this world with treachery, and devise engines for my life” (4.2.217-19) before ensnaring Roderigo in a deadly trap.

Enthralled by such social mastery, Madoff and Iago’s victims eagerly fall prey to their plots. That none of Madoff’s investors—smart, successful, wealthy people— conducted due diligence suggests they wanted to believe he had devised a magic formula to generate steady returns in any market. Of course, as Harry Markopolis explained before Congress, no such strategy exists. But Madoff cultivated the persona of a master money manager whose knowledge and skills defied financial gravity.

In a New York Post article Eli Wiesel described the dinner he had with Madoff when he decided to invest with him 20 years ago. Most striking and revealing, Madoff never actually discussed money; he strategically schmoozed about “history, education and Jewish philosophy.” It was a foregone conclusion that Wiesel would invest and Madoff would bring steady returns. Madoff cleverly let his reputation carry him through rather than make a formal pitch, luring his victim into what Iago calls “the door of truth.”

Iago likewise convinces Othello that Desdemona is unfaithful through “imputation and strong circumstances”—just as Madoff refused to reveal his money-making strategy because it was a scam, Iago never brings Othello to see Desdemona copulate with Cassio because that never occurs. But both villains lead their victims to the door of truth through reputation and circumstantial evidence: in the “my noble lord” sequence (act III scene III) Iago induces Othello to contemplate Desdemona’s infidelity but cautions against explicitly accusing her of cheating. He knows that his scheme will work only if it is Othello who reaches that conclusion on his own. After many vague but sinister remarks he moves in for the kill by mentioning that he saw Cassio “wipe his beard” with Desdemona’s handkerchief. Incensed, Othello bursts through the door of truth as impetuously as Wiesel and thousands of other Madoff investors.

The Madoff story and the tragedy of Othello are ultimately grand displays of will power that culminate with fatal consequences. According to an article in Fortune, Madoff relished the role of provider—when he would throw parties or attend events put together by people who made money through his business he had to be made to feel that everyone knew they were there because of his success. He often gloated about his rise from obscurity and expressed contempt for the elites who grew up in rich neighborhoods and stuck it to him throughout his upbringing, according to the author of Betrayal, the Life and Lies of Bernie Madoff. Furthermore, in the Vanity Fair article, Squillari writes, “He became, as he liked to remind me constantly, ‘one of the most powerful men on Wall Street’” (98-103).

As a psychologist explains on CNBC’s Scam of the Century, the Ponzi-schemer plays god by controlling his subjects’ fates—he doesn’t invest their money, he owns it. And when his operation implodes, everyone falls with him. This has tragic consequences. Upon learning that he lost his fortune, Rene-Thierry Magon de la Villehuchet, a prominent French financier who invested $1.4 billion of his and his friends’ money with Madoff, “swallowed sleeping pills and slashed his arm with a box cutter. He wrote in a suicide note, ‘if you ruin your friends, your clients, you have to face the consequences’” (162).

Iago is likewise driven by willpower. In act I he candidly explains to Roderigo that “our bodies are gardens; to the which our wills are our gardeners: so that if we will plant nettles, or sow lettuce … the power and corrigible authority of this lies in our wills” (1.3.322-28). He considers love “merely a lust of the blood and a permission of the will” (1.3.337-38), and during his soliloquy at the end of act I, Iago asserts that he seeks “to plume up my will in double knavery.” According to critic Harold Bloom, with Iago, Shakespeare anticipated Nietzsche’s Uber-mensch. Much like Madoff, Iago craves control over those connected to him. His actions are deliberate and devilish. He does what he does because he can. Because it makes him feel alive. Because it gives him the satisfaction that comes along with power and influence, even if it ultimately leads to his own undoing.

Iago is originally a powerless punk, as was Madoff. Early on in the play he attempts to cause disruption by awaking Brabantio in the middle of the night to inform him that his daughter has eloped with the Moor. But no immediate harm comes from this; Brabantio and Othello settle their grievances in an orderly court proceeding. As the story unfolds Iago’s duplicity and power magnify, and in the end two innocent people are killed, the Moor stabs himself to death, three others are severely wounded, and a war-torn island is shaken to the core.

Indeed, the Madoff affair fills me with the same sentiment as Othello: I am at once horrified by such shocking cruelty and lack of conscience but also in awe, perhaps a symptom of schadenfreude. After all, let’s face it; there is something impressive about Madoff and Iago’s capacity to manipulate. Nevertheless, man’s worst nightmare is to befriend such a person. And it’s extremely difficult to determine whether we know a Madoff or an Iago, because their brand of lunacy entails secrecy and subtlety. Consider this chilling quote from Macbeth: “There’s no art to find the mind’s construction in the face: He was a gentleman on whom I built an absolute trust.”