A review of Bing West's middling The Wrong War: Grit Strategy and the Way Out of Afghanistan. 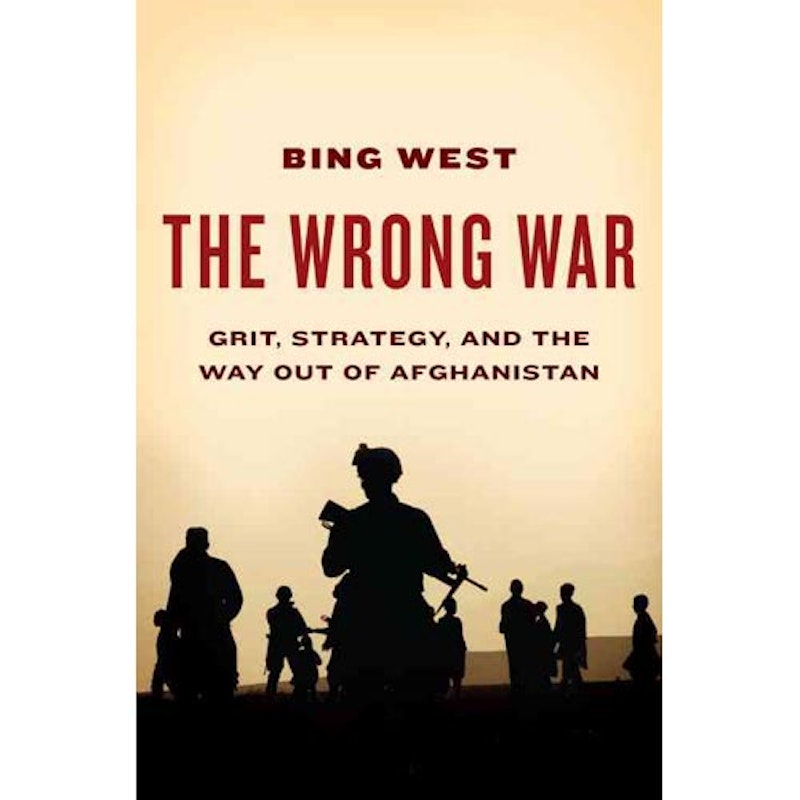 “Americans have been in Konar for seven years,” Dempsey said, “and we haven’t broken through with these people.” (page 55)

The speaker there is Major Jason Dempsey, an American operations officer fighting in Afghanistan. His off-the-cuff comment is recorded in Bing West’s non-fiction report/policy prescription The Wrong War: Grit Strategy and the Way Out of Afghanistan. West sees this quote as embodying the problem with our strategy in Afghanistan. And it does. It also neatly encapsulates the problem with West’s book.

That problem is that Dempsey, West, and America all believe that being in Konar for seven years should somehow allow us to break through with somebody or other. The Afghans, in short, should be grateful.  I mean, hasn’t anybody here read Kipling?
“Take up the White Man’s burden— / And reap his old reward: / The blame of those ye better / The hate of those ye guard—“

To be fair, it’s not especially clear that Bing West reads anything in particular. His prose is as drab empty, and pointless as the landscape he colorlessly alludes to, and his insights and characterization seem drawn mostly from second-hand stereotypes gleaned from B-war movies. At one point he notes, with the preening pragmatism of the grittily banal, “Grunts don’t think of the enemy as human.” West doesn’t need to say, of course, that he doesn’t think of the enemy as human either—to make no mention of the Afghani civilians. West’s constantly upbraiding the latter for betraying the Americans, being lazy and shiftless, refusing to buckle down and work to improve their homes, and failing to stand up to the Taliban. And why do they fail on so many levels? He cobbles together various reasons—they know the Americans aren’t here to stay; the handouts by the U.S. have created a culture of entitlement and so on. But his contempt still oozes out. As he notes in one revealing aside, “Some sub-tribes were friendly and some thieves, depending on some ancient DNA.” (p. 73) The Afghans’ real problem is that they, like the blacks in the antebellum South, or the Indians under the British Raj, are bred for larceny and duplicity.

As anyone familiar with such narratives would expect, things get even worse when West attempts to describe the natives he likes. His (of course) group description of the Afghani translators who worked with American troops is a masterpiece in the extensive genre of condescending imperialist self-delusion.

“At the squad level, there were thousands of Siads [an interpreter], overachievers who had learned pidgin English memorizing old soaps playing on black-and-white television sets. Incredibly hardworking, inevitably they were adopted into the rough fraternity of the grunts. Their skills were marginal, no matter how hard they tried. Their hearts were huge. Anyone who doubted the magical image of America in the minds of millions of Afghans had only to spend a day under fire with a U.S. squad and the local terp.”

And anyone who believes that a subjugated people are going to embrace en-masse the sneering subjugators who refer to as “marginal” the skills of those on whose hard-won facility they depend for their lives … well. Let’s just say that Gunga Din is a meme of long-standing, that if you consider him for a second human, you cannot really imagine that his soul is as Kipling portrays it, and to the extent that Kipling is accurate, Gunga Din’s fate is almost sure to be seen by his countrymen not as a vindication of his life, but as just retribution for his sins.

West’s portrait of the grunts themselves is familiar too. They are dedicated, professional, profane, brave, eager to fight, and occasionally nobly frustrated with the inadequacies and indecision of headquarters. At times West will allude to American soldiers who acted in a cowardly fashion, or who shot civilians for fun, but they’re all offstage. Everyone we’re introduced to is a testament to warrior blandness, paragons of righteous Americanhood. Forget Norman Mailer or Tim O’Brien or, for that matter, Abu Ghraib—in West’s army, soldiers are never scared, jealous, vicious, or even just stupid. The Afghans’ distrust of them is thus doubly mystifying. Who would not, if they could, throw themselves under the boots of such ideal overlords?

Amidst the clunky prose and invidious archetypes, West does have a thesis. He argues that American troops shouldn’t be nation building; they should be killing Taliban. Stop worrying so much about hurting civilians (since you have to break some eggs) or hurting soldiers (who are too brave to mind) and instead let the American army go out there and kick some ass. Oh, yeah, and after the ass is kicked, hand off to the Afghan troops, who, I guess, will be really thankful that you’ve killed so many of their neighbors.

West is extremely convincing when he argues that current American policy doesn’t work; he’s at his best when eviscerating Obama and Gates’ sententious political waffling (we’re going to be out in 18 months…unless we’re not…uh…but yeah! 18 months!) But his substitute strategy is undermined by the manifest and towering obliviousness to which his imperial worldview has consigned him. West sees Afghans as subhuman and Americans as angels. As a result, he never really deals with the fact that they hate us not because they’re cowards, or misguided, but because we’re an armed presence on their land. West harkens back repeatedly to the more bloodthirsty rules of engagement of Vietnam…but, of course, we lost that war too. And for the same reason. If you’re going to be successful imperialists—if you really feel that Afghanistan is important enough to U.S. security that we must control the place—then you need to do what Kipling said. Go in knowing you’re going to be hated, and just repress, repress, repress—with as much force and cruelty and money as it takes, until the country is awash in the blood and corpses of innocent and guilty alike. If you don’t have the stomach for that, then you should get out.