A review of India Calling: An Intimate Portrait of a Nation's Remaking. Grade: B+ 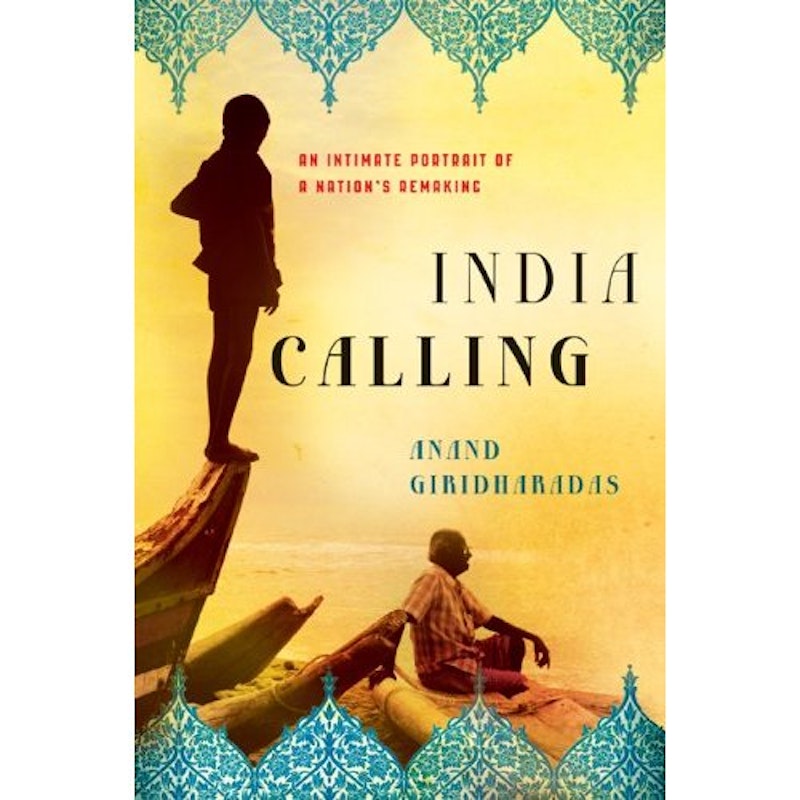 Like so many before him, Anand Giridharadas left the land he was born and raised in, going abroad to seek opportunity and a chance to remake himself. For Americans, it is a familiar tale, often part of our family history, and central to our conception of the US as a land of opportunity. So, what's special about Giridharadas' story, India Calling: An Intimate Portrait of a Nation's Remaking? He wasn't coming here; he was leaving.

Giridharadas is an American. He grew up in suburban Cleveland, the son of highly assimilated Indian immigrants who had left their country to find more freedom and better jobs. Despite family trips back to India, he says he felt American and had difficulty connecting to a country he saw as frozen in its poverty and socialist bureaucracy. However, by the time he graduated from college, the world was looking to India as place of opportunity and dynamism, calling it a new world power. Giridharadas decided to move there to experience these changes and eventually ended up working as a correspondent for The New York Times.

India is a massive country with a population of over one billion people, with various regional, social, and religious identities. Though there is a lot of curiosity internationally, it would be a mistake to make generalizations about what India is or how Indians think. Giridharadas smartly avoids such sweeping statements, and instead takes us along on his travels around the country, sharing the stories of people from various levels of society, with various takes on the transformation of their country, and instead of making a prediction about where India is going, he creates a narrative about what it is like to live within the pushing and pulling tides of change.

The most striking story in the book is about a young man named Ravindra, born in terms of caste and money at the lowest level of society, who nonetheless manages to pull himself into comfort and respectability through hard work and relentless strategizing. Moving up through the ranks as a salesman and then a teacher, he ends up owning his own schools and coaching the Indian roller skating team. But if his unwavering focus on self-improvement and his next acquisition has allowed him success in India's new meritocracy that his parents could not have dreamed of, it has also stunted his development in other ways. Unable to factor his girlfriend's needs and feelings in his plan, he is left hurt and bewildered when she agrees to marry another man.

Giridharadas also visits leaders of the Maoist insurgency. Living in Hyderabad, the main city for India's IT boom, the insurgent Venugopal worries that the changes are pulling society apart. Although the prevalent view is that money will be the element that destroys the old bounds of caste, the Maoist sees it as an alienating and corrosive force. In his view, the only way to bring about a fair society in India, without undermining the traditional qualities of spontaneity, warmth, and mutual involvement, is through a Maoist revolution. Yet at the same time, he was working for the most famously capitalistic newspapers in India and accepting research grants from the World Bank.

These cases, like all of those presented in the book, are studies in contrasts. We see middle-class Brahmin fretting about the loss of respect for their caste while ignoring the ascetic prohibitions against meat and alcohol. We see well-educated, independent women who still live with their parents and accept arranged marriages. Everywhere, it's a mix of old and new, small compromises, attempts to reconcile conflicting pressures.

India Calling is not just another book about that country, but a story about what it is like to live in the heart of transformation, to be pulled at once toward the comfort of tradition and the excitement of opportunity. Liberation and uncertainty go hand in hand, and the play between the two is seen and experienced in vibrant color as Indian society rushes forward at breakneck speed. We can only watch and see what direction the sum total of a billion individual choices will take.