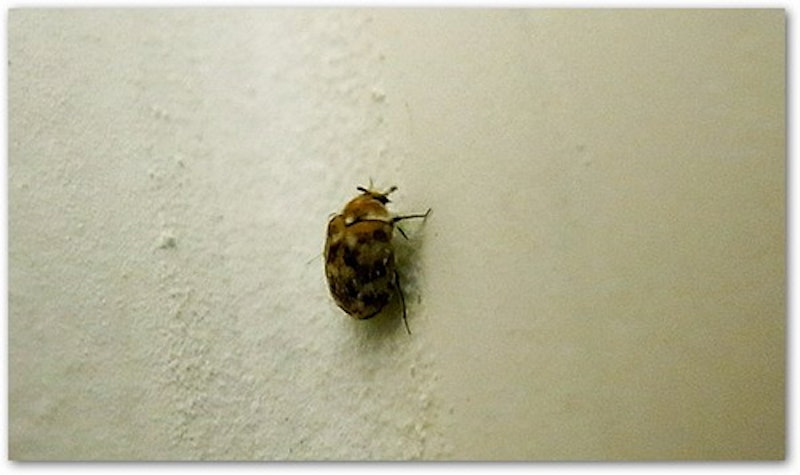 Baltimore citizens might be unaware that there’s an ugly epidemic currently in the city. I spend most nights lying awake, hoping that the bed bugs will not bite. So far, neither wishful thinking nor more practical methods have kept the bastards at bay.

I first noticed the bites a couple months ago while sitting at my desk (I work from home) one afternoon. What began as just a very mild itch on my back and shoulders had suddenly necessi-tated violent scratching. When I went to a mirror and pulled off my t-shirt to inspect the damage, I was alarmed to see what resembled three highly inflamed mosquito bites in close proximity to each other. Eventually, the inflammation went down but the itching persisted for days.

Thinking they were indeed mosquito bites, I resigned myself to scratching and didn’t think much more about it. It wasn’t until I started waking up in the middle of the night with the incredible desire to scratch—my legs, my arms, my shoulders—that I began to wonder if something more serious was at work.

At this point, my girlfriend did some Internet research and discovered that Baltimore (in fact, the entire East Coast) has been suffering a prolonged infestation of bed bugs. Though nearly eradicated in the 1970s before environmentally pernicious insecticides like DDT were banned, bed bugs are now making a comeback. And there doesn’t appear to be any sound way to stop them.

I’m a windows-open kind of guy, so it’s not hard to imagine how the bed bugs might have gotten in. I also live in a five-story, 100-year old building in Mount Vernon that I share with at least a few questionable characters. If you’ve read City Paper’s expose from last summer, then you know where many city residents are pointing their fingers. In my opinion, this racist slander is complete balderdash; the filthy tenants in my building are white.

The blame game is preposterous anyway. Among the supposed culprits for spreading bed bugs are people who “travel a lot.” So if you’ve ever stayed in a hotel—high- or low-end—or visited a friend or gone anywhere that has brought you in contact with people who like to leave their homes from time-to-time, then you are possibly responsible for bringing these nasty insects onto the premises. Arriving back home, you were supposed to wash all your clothes, dry them on high heat for one hour, immediately vacuum out the luggage and throw away the vacuum bag. Didn’t you know? Meanwhile, the itching continues.

After a few weeks of bites, I decided it was time to take aggressive action. Actually, I was forced into it by a neighbor who said he intended to “bomb” his apartment and kindly warned me so that I might do the same.

As an admitted tree-hugging naturalist, I wasn’t thrilled to receive the news that our neighbors would be unleashing toxic chemicals indiscriminately into the shared air of our building. But spraying seemed like one of the few options and at least had some chance of eliminating the invaders. I was able to convince our neighbors to perform a more targeted treatment, and I sprayed along the baseboards of our bedroom and other cracks in the walls and around the ra-diators.

For a while, this seemed to work. Then more bites. One night I woke up at four in the morning—bed bugs like to feast just before dawn—and caught two of them, one in the sheets near my leg and another crawling on the floor.

The second round of treatment was more intense. This time I ripped our mattress apart and wiped the whole thing down with household cleaner. I inspected all the seams and the bed frame. I scrubbed the floor and washed the sheets. I got my landlord to patch big cracks in the floorboards. And I sprayed a second time. I took precautions to make sure wily bed bugs could not crawl up into the bed. I rolled duct tape around the legs of the frame and pulled the bed away from the wall. I got rid of the dust ruffle and made sure the sheets did not touch the ground.

Again, this worked for a while. I had one false alarm after going camping for a weekend when I mistook poison ivy on my leg for bed bugs. Then our new neighbors in the basement started complaining about bites, and my girlfriend, right before going to a wedding, got two unsightly bites right on her cheek.

Until this point, our landlord had been involved only at a distance. He bought the bug spray and helped patch a few spots where we thought bugs might be coming in. Now, with new tenants threatening to move out, we implored him to call a “professional.” The Terminix strategy is es-sentially to spray the same insecticide we had already used twice, albeit more diffusely and in a few tight spots I hadn’t thought of. They also rolled in a pressurized canister hooked up to a spray gun—called a “freeze machine”—that uses dry ice to kill bed bugs. It took my girlfriend and me several hours to put all our clothing and bedding into plastic bags but less than 30 min-utes for the Terminix bug-buster to spray chemicals willy-nilly around our bedroom and living room.

And that’s pretty much where things stand. I doubt this is the end of our bed bugs or the itching and scratching that keeps us up at night. When Terminix returns in 10 days for an inspection, we’ll get another spritz of carbon dioxide and the fun will continue.

After that, the next step is to try Valium.