The Alvin Greene debacle is just more of the same for South Carolina—just don't mention that over a buffet of cooling dumplings and cobbler. 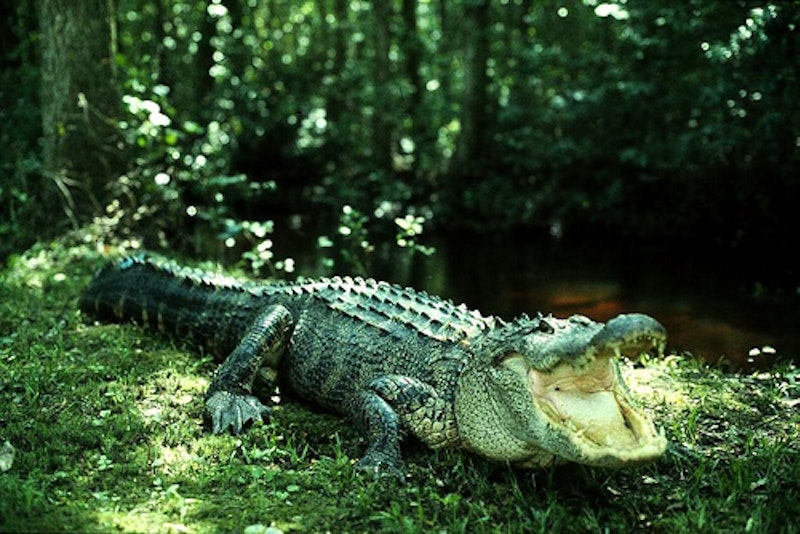 The Gramling Family Reunion is held once every year at the end of Gramling Rd. inside a lonely community center in Four Holes, South Carolina. The center is wood-paneled. It could be mistaken for a church. Typically, the pulpit is manned by a real reverend, Thomas Gramling, who leads the family in song at the opening of each meeting. The songs, some patriotic, some devotional, all run one verse too long. The Gramling family gathers in rows, holding blue, printed song sheets, singing in hushed tones as covered dishes line an otherwise empty table at the back of the center, dishes containing all manner of casserole, dumplings, gravy and cobbler, all of which will inevitably and unfortunately cool.

It's a safe bet that every year, at least one member of the family will turn back to catch a longing glimpse of that untouched buffet. It's a varied family. Some look fresh out of the military, others just back from college. A few are old, and there's one very young baby. By 12:30 p.m., all of them are hungry. When the singing is over, when the Gramling antiques have been shown and the old stories have been told, when the budget is voted on and approved, and the officers for next year's reunion have been elected, the Gramling family is finally released to lunch.

I've been to three Gramling reunions now. All of them with my Great Aunt Mary Ann.  Her surname is "Miller"—she is as much of a Gramling impostor as I am. Asking my aunt what the relation is between the two of us and the Gramlings (which I do every year) yields this response, "I don't know about any of that old stuff." This year, I attempted to scan the three pillars of posterboard behind the podium bearing the Gramling family tree but couldn't find any sign of either of us. The Gramlings all shrugged their shoulders and pointed to their eldest member. He simply smiled and shook our hands.

As near as I can figure, my Aunt started coming to the reunion years ago and just hasn't been turned away. "I like coming here," she says, "The Miller family doesn't have much of a reunion." Like I said, the Gramlings are a friendly lot. They don't ask many questions. As if they didn't want to know the truth.

Their paper plates teetering with food, their Dixie cups filled with sweet tea, the Gramlings retired to the long picnic tables to chitchat. I was just tucking in to some fried squash casserole when a Gramling house mom next to me started talking: "I tried to keep the car keys away from my daughter, but she's 16 years old now. I told her that Jim didn't even let me drive until we'd been married for five years. I was in my 20s!" Jim laughed. "Times were different then. Women had to stay home and support their breadwinners."

The Gramlings reflected on years of change in South Carolina. They bragged about their children and they laughed at how easy their lives have been since they sold the family farm. They talked about progress. What they didn't talk about was the man that everyone outside of their state has been discussing without end: Alvin Greene.

When I heard the news about Alvin Greene, the underdog of all underdogs, I wasn't much surprised that the Gramlings didn't bring him up. Greene won the SC Democratic U.S. Senate primary even though he didn't seem prepared to run in the first place. It was hard enough to believe that Greene was elected in the first place let alone to think about why or how.

Ever since his victory, reporters have been trying to answer some basic questions: How did Greene win 42 out of SC's 46 counties without ever giving a public speech? How did he beat a well-known Councilman from Charleston, Vic Rawl, by 17 percentage points? How could he afford the fee to put his name on the ballot—a sum greater than $10,000—when his stated income for an entire year is only $12,000? How was he was elected in spite of a felony conviction for perverted advances toward a USC student? Greene may be the ultimate underdog, but his story is still a farce; more Forrest Gump than Rudy.

The story we got from the press was that Greene's questionable victory was politics as usual in South Carolina, a state that can't seem to get its fill of negative news. Last year around this time, I was writing about Gov. Mark Sanford, a man whose romantic expeditions could've inspired a Lifetime movie-of-the-week if they didn't involve adultery. This year, in a not-odd-for-SC turn of events, voters chose another (alleged) adulterer, this time a woman, to live in the governor's mansion. But not before her ethnicity was caricatured by a man who spoke at my grandfather's funeral, Senator Jakie Knotts.

Before he died in 2007, my grandfather's final scheme was patenting a touch screen voting machine. He called the device PointZero, a cocky nod at the device's error rate: Zero percent. His dream was, on election day, South Carolina voters would walk into their booths and see the faces of all the candidates before them. To place a vote, all they would need to do is touch the picture of their candidate. The system would ask the voters to confirm their choice and would move on to the next race. No more misplaced votes; no more butterfly ballots; no more Alvin Greene.

After the bungled presidential election in Florida in 2000, the U.S. Government set aside millions of dollars to modernize our country's voting machines. This was my grandfather's prize. He lined up a hundred third graders at an elementary school to prove how easy his machines were to use. Then he ran the same test at a retirement home. No glitches. Things were looking rich. A sale of a few hundred PointZero voting machines to one county in South Carolina would have given my grandfather enough money to buy a Gulfstream jet.

But, my grandfather didn't sell a single voting machine. His product was innovative, his technology was sound, but the state election boards weren't interested. The friends my grandfather made in the State House over 50 years of political donations told him quietly that South Carolina's incumbents didn't want a clean election. They'd rather have distortion fill the ballot box. They'd rather not know the truth.

And I wonder what Grandpa Casey would think of Alvin Greene. If something so simple as a picture on the voting ballot would be enough to separate a qualified candidate from an unqualified one.

Maybe South Carolinians like the Gramlings are tired of having their state serve as a punchline, as a warning to the rest of the country that inept governments start with inept politicians. They're tired of having their state brag about being "First In Golf" while their high schools rank in the bottom third of all states. They're tired of the Dick Ravenels and the Mark Sanfords and the Jakie Knotts. They don't want to consider the implications of Alvin Greene's election, whether they signify some intricate conspiracy, inborn racism, mechanical catastrophe or statewide ignorance. They don't want to know the truth.

Or maybe they're just too polite to talk politics over lunch.