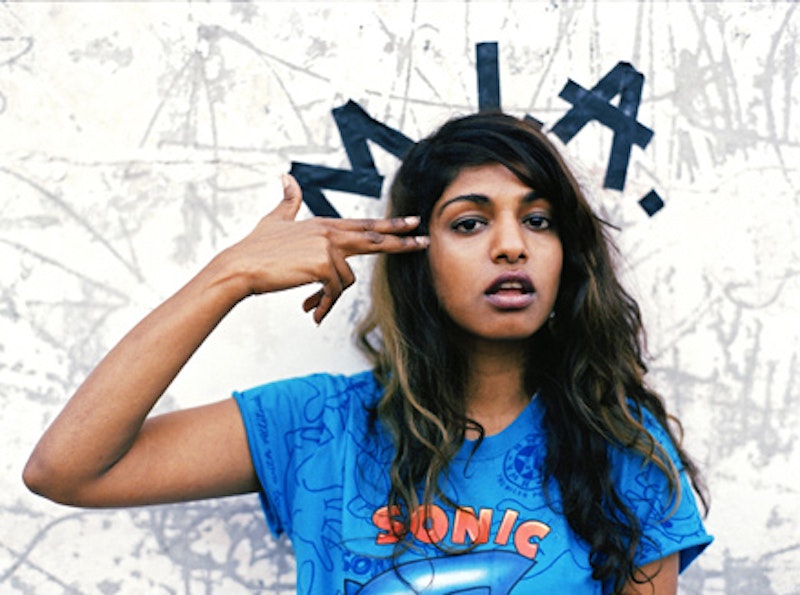 The recent New York Times Magazine profile of pop star M.I.A. has, predictably, set the Internet ablaze with outrage, both over the fun-sized singer’s apparent anything-for-a-headline approach to life and for writer Lynn Hirschberg’s detectable eagerness to expose it. (That the Times sees M.I.A. fit for not just an 8,100-word profile but also an eight-page photo spread has gone mostly unremarked.)

The London-born Sri Lankan is in the midst of trying to make a name for herself as a kind of Madonna with Che Guevaran tendencies (too bad Madge already co-opted Che for American Life), regularly identifying herself as a “terrorist” and given to facile pronouncements like, “My giving birth [in L.A.] is nothing when I think about all the people in Sri Lanka that have to give birth in a concentration camp.”

That she’s more pose than political activist has been something of an open secret ever since her first album, 2005's Arular, put her on the critical, if not the popular, map. To this day, nobody can say for sure just what, if anything, her biggest hit, “Paper Planes” (that undeniably catchy mish-mash of gunshots, cash registers, and the Clash’s “Straight to Hell”) is actually about; guesses in Hirschberg’s piece include illegal immigration and parodying suburban American rap culture.

Hirschberg – who semi-famously created another shitstorm when she claimed in a Vanity Fair profile that Courtney Love took heroin while pregnant – is relatively even-handed with M.I.A., though she does take pains to point out her radical-chic pose and her tendency to alter her narrative when it suits her: M.I.A. has contradicted herself over whether her father was a Tamil Tiger or not (most likely not), blithely misidentified the Sri Lankan civil war as a “genocide,” and most recently produced the determined-to-be-controversial music video “Born Free,” where, as Hirschberg notes, an “apparently American militia forcibly search out red-headed men and one particularly beautiful red-headed child….The first to die is the child, who is shot in the head….As a meditation on prejudice and senseless persecution, the video is, at best, politically naïve.”

Unfortunately, the tune wasn’t exactly all that, and the controversy was pretty much gone within a week.

“It’s hard to know if she believes everything she says or if she knows that a loud noise will always attract a crowd,” Hirschberg remarks in what you’d think would be the most-seized-upon part of her piece. Though in reality the biggest noise has come from her noting the singer ate “a truffle-flavored French fry” in her presence.

Apparently meant as yet another sign of the disconnect between M.I.A.’s longed-for street cred and her nouveau riche reality, the line has since been deconstructed by Village Voice food writer Robert Sietsma, who told the Atlantic Wire that “No one who has the slightest amount of taste would ever eat anything called a truffle-flavored french fry,” which are “uniformly awful.

M.I.A. was showing her lack of culinary sophistication by eating anything called truffle-flavored fries (and, later, by refusing a photographer's offer of wonderful Sri Lankan rice pudding!), and Hirschberg her own lack of culinary sophistication by thinking that truffle-flavored fries were effete. This is the kind of misunderstanding that always occurs when two non-foodies get together for an interview.

At any rate, M.I.A. has predictably been outraged by the Hirschberg piece, tweeting the reporter’s cell number (Hirschberg called the move “infuriating and not surprising” and hilariously told the New York Observer that the resulting messages “have mostly been from people trying to hook up with M.I.A.”), and yesterday releasing a new song on her blog (along with purported snippets of the interview under the ghetto-fabulous double entendre “Here’s the Truff”). The tune, entitled “I’m a Singer” (which she isn’t, but never mind), includes such lyrics as “Why the hell would journalists be thick as shit / Cause li es equals power equals politics” and “You’re a racist / I wouldn’t trust you one bit.”)

Whether or not the masses will rise up to demand the ultimate “truff” about the fries incident remains uncertain, but like the good little recording artist that she is, M.I.A. will go on beating this and any other drum at hand to pump up interest in her third album /\/\ /\ Y /\, on sale July 13, while, with luck, continuing to deliver musical updates on everything from the Gulf oil spill to today’s beach forecast.

Should the album flop, she’ll just have to retreat to the Brentwood house she shares with fiancé Ben Bronfman, son of Warner Music Group chief executive and Seagram’s heir Edgar Bronfman Jr. and wonder at the politics-fueled racist conspiracy of it all.