Creepy in a backwoods man-baby kind of way. 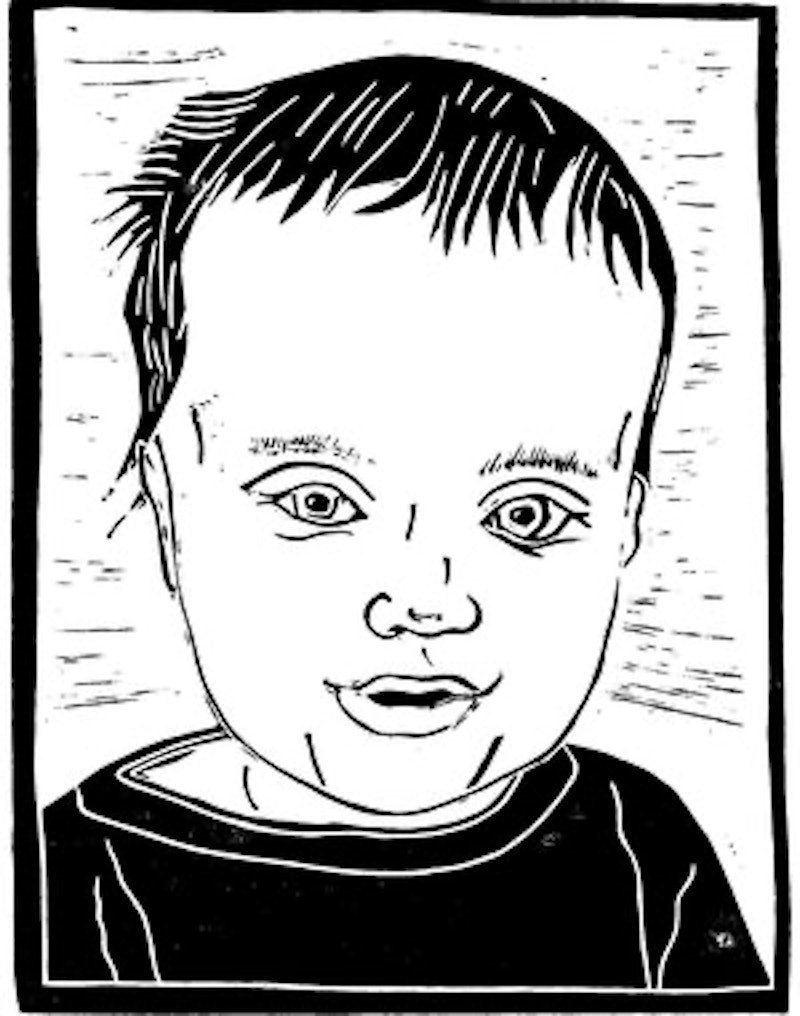 I began carving woodcuts in 2008. Woodcuts are brusque, harsh and bold. The carving process is slow and methodical and a single carved block can take weeks, even months to complete. Small mistakes you learn to live with, but if you make a large mistake, you’re forced to start over.

What makes a woodcut portrait come to life are age lines, wrinkles and weathered faces. A hardened actor like Lee Marvin will translate much better than a young Audrey Hepburn. The ideal subject for a woodcut portrait is a coal miner, aging cowboy or a grizzled war veteran. Woodcut artists are like Bizarro World Plastic Surgeons—they add wrinkles instead of removing them.

Several years ago, I was commissioned by an old college friend to carve a woodcut of his 15-month-old son, my first carving of a baby. The boy was beautiful, vibrant and alive. I was excited to capture his essence, to channel his spirit through my carving tools and a linoleum-covered block of wood.

The carving process took six weeks. When I was finished my friend invited me for dinner, excited to see the results. As I revealed the print, my friend’s face dropped. He stared quietly, blinking a few times, stepping back to see the print more clearly then stepping forward again.

“What happened?” he whispered as if in shock.

“I just wanted you to capture the feeling of a baby waking from a nap. He looks kind of sinister, don’t you think?”

I was disappointed and confused. I’d been so focused on each individual gouge, I hadn’t taken time to properly assess the final image. I promised my friend I’d attempt another carving and drove home, demoralized. My wife, a watercolor painter, told me that clients are never satisfied with portraits of their children. “Don’t take it too hard,” she advised. “It’s happened to me several times.”

But I couldn’t let it go. I emailed the print to a number of friends and asked for their honest, objective feedback.

“Rosemary would be proud,” the first friend replied. (A reference to Rosemary’s Baby.) “It’s alive,” read a second email (another horror film reference.) A third friend commented, “I think you forgot to carve the 666 in the baby’s forehead.”

I finally showed the print to my closest friend, whose opinion I deemed impeccable.

“I must say the kid is creeping me out in a backwoods man-baby kind of way,” he said.

I spent the next month immersed in a new carving. This time I patterned the baby’s eyes after a female deer. The resulting image was softer and cuter, more like an infant. My friend was relieved with the new print but also still seemed shocked from the initial image. It was as if he thought I’d accused his baby of being possessed. Five years later and we’ve only spoken once.

What was the lesson here?  Babies + Woodcuts = backwoods man-babies.